Alpowa, Search for Safe from the Annie Faxon in 1893.

needs more research, by local.
no followup found as to the results of the Captains search. 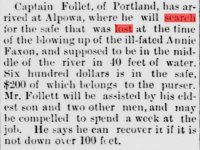 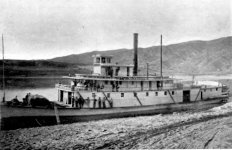 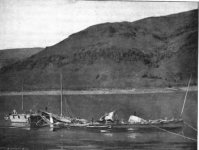 Annie Faxon was a steamboat that was built by the Oregon Steam Navigation Company. She is chiefly remembered now for the catastrophic boiler explosion in 1893 that destroyed her and killed eight people on board

On April 14, 1893 at 7:30 a.m., Annie Faxon was destroyed in a catastrophic boiler explosion. The boat was coming in for a landing with Captain Harry Baughman in command. Suddenly with no warning the boiler exploded and the upper works of the vessel were destroyed. Eight people were killed, including the bride of purser J.E. Tappen, who was blown into the river and drowned. The boat's pilot, Thomas McIntosh, had been beheaded by flying debris, and crewman William Kidd was blown to pieces. Captain Baughman, who had been standing next to pilot McIntosh, was blasted onto the shore, dazed and injured. Five crew members were killed
Last edited: Nov 12, 2018
K

WAIT, WHAT?!? Billy the Kidd was on the steamboat, huh?!