🔎 UNIDENTIFIED Any ideas on this

anyone know what this could be?

That cross on the end looks like a lathe mark.Does the smaller part move or come out of the larger?My first thought was a turkey call but something dosn,t seem right for that.Can,t help any more than that my friend.
Upvote 1
OP

jtw1313 said:
No it is all one piece but that mark is on both ends
Click to expand...

That kills the turkey call idea,but maybe confirms that it was turned on a lathe.Maybe some kind of masher, as pepperj said.
Upvote 1
C

The length and heft would certainly adjust ones attitude when applied vigorously to the cranial area.
Upvote 2
C

Just a thought but the tassel on the end would indicate some kind of tool or implement.How about a really stout drum beater?
Upvote 1

Sarge,just a thought but we,ve all been thinking of just the single item.Maybe there was a pair of them,just a thought to stimulate the old gray matter.
Upvote 0

The x marks on the end are definitely from a wood lathe, but other than that I have no idea what it would be used for.
Upvote 2
I

Are we over-thinking this? I wouldn't pay too much attention to the marks on the ends. They look to be from it having been gripped in a lathe to turn it, which would explain why they are the same on both ends. I think it unlikely it saw any kind of kitchen use that would require it to be washed afterwards because of the cord tassels on the handle.

With a 'business end' of fifteen inches, it would be about right for a 'night stick' (billy club). Those used by law enforcement were better made and usually marked with a name or an authority, but civilians used them too. Night watchmen and others employed for security of premises. Those can be more simply made and not marked. 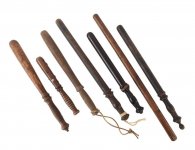 Edit: Mud Hut replied while I was typing.
Upvote 3

Horse whip of some sort?
Upvote 1

GoldieLocks said:
Horse whip of some sort?
Click to expand...

A baton that the leader in the band used in the parade.
Upvote 1
You must log in or register to reply here.

🔎 UNIDENTIFIED Help with silverish nugget dug up in Texas