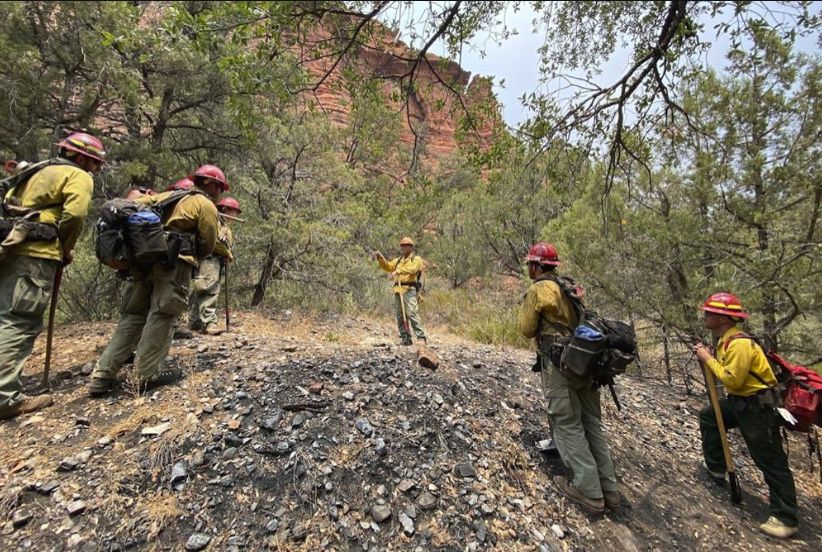 photo provided by the U.S. Forest Service, Jason Nez, center, talks to wildland fire personnel working a blaze in northern Arizona in 2021. Nez is a Navajo archaeologist and firefighter who advises fire officials on how to protect archaeological resources. (Paul Dawson/U.S. Forest Service via AP)

FLAGSTAFF, Ariz. (AP) — As Jason Nez scans rugged mountains, high desert and cliffsides for signs of ancient tools and dwellings unique to the U.S. Southwest, he keeps in mind that they’re part of a bigger picture.

And, fire is not new to them.

“They have been burned many, many times, and that’s healthy,” said Nez, a Navajo archaeologist and firefighter. “A lot of our cultural resources we see as living, and living things are resilient.” 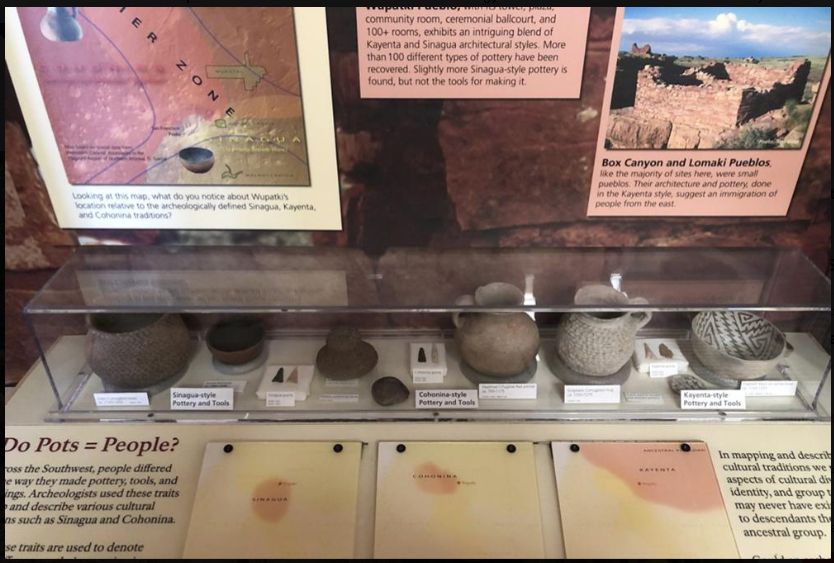 This undated photo provided by the National Park Service shows centuries-old pottery on display at Wupatki National Monument outside Flagstaff, Arizona. The monument and artifacts have been evacuated twice in spring 2022 because of wildfires.


As a pair of wildfires skirt this mountainous northern Arizona city, the flames are crossing land dense with reminders of human existence through centuries — multilevel stone homes, rock carvings and pieces of clay and ceramic pots that have been well-preserved in the arid climate since long before fire suppression became a tactic.

Today, firefighting crews increasingly are working to avoid or minimize damage from bulldozers and other modern-day tools on archaeological sites and artifacts, and protect those on public display to ensure history isn’t lost on future generations.

This 2021 photo provided by the U.S. Forest Service, shows Michael Terlep, left, and Jason Nez at the Honanki Ruins Heritage Site near Sedona, Arizona. The archaeologists were assessing the risk of wildfire and potential impacts if it reached the site.

“Some of those arrowheads, some of those pottery sherds (broken ceramics) you see out there have that power to change the way we look at how humans were here,” Nez said.

The crews’ efforts include recruiting people to advise them on wildlife and habitat, air quality and archaeology. In Arizona, a handful of archaeologists have walked miles in recent months locating evidence of meaningful past human activity in and around scorched areas and mapping it for protection.

“We know this area is really important to tribes, and it’s ancestral land for them,” said U.S. Forest Service archaeologist and tribal relations specialist Jeanne Stevens. “When we do more survey work, it helps add more pieces to the puzzle in terms of what’s on the landscape.”

It’s not just the scattered ruins that need protecting. 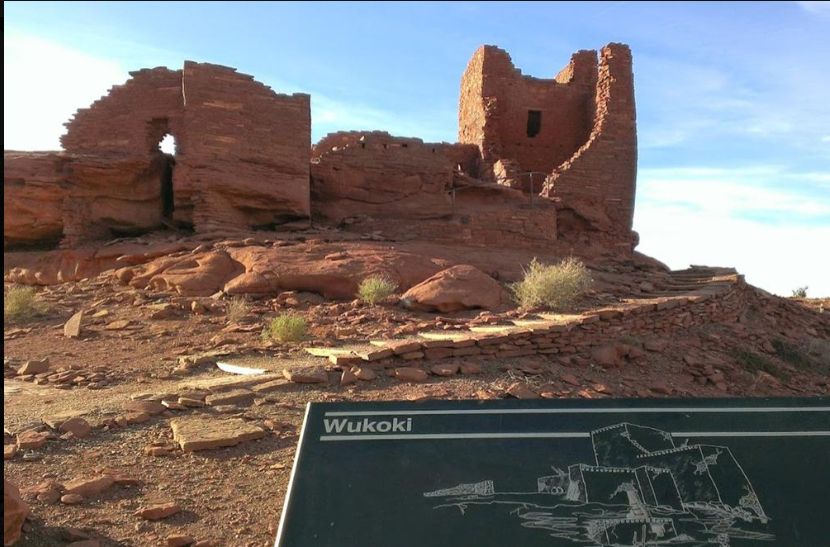 This photo shows the remains of a multilevel stone dwelling at Wupatki National Monument outside Flagstaff, Arizona, on Feb. 17, 2014. The monument has been evacuated twice during spring 2022 because of wildfires.


The nearby Wupatki National Monument — a center of trade for Indigenous communities around the 1100s — was evacuated because of wildfire twice this year. Exhibits there hold priceless objects, including 800-year-old corn, beans and squash, along with intact stone Clovis points used for hunting that date back some 13,000 years.

Before the first wildfire hit in April, forcing the evacuation of the monument and hundreds of homes outside Flagstaff, there was no set plan on how quickly to get the artifacts out because wildfire wasn’t seen as an imminent threat to Wupatki.

Gallenstein assembled nested boxes with cavities for larger items and foam pouches for arrowheads and other smaller artifacts. She had photographs for each item so whoever was tasked with the packaging would know exactly where to put them, she said.

Gallenstein created a training plan on how to pack up ceramic pots, bone tools, sandals, textiles woven from cotton grown in the area and other things before another large wildfire broke out June 12 and the monument was closed again. No one expected to put the plan into action so soon.

The fires have so far avoided the facility. Several boxes of items that trace back to what archaeologists say are distinct Indigenous cultures were taken to the Museum of Northern Arizona for safekeeping.

Some Hopi clans consider those who lived at Wupatki their ancestors. Navajo families later settled the area but slowly left, either voluntarily or under pressure by the National Park Service, which sought to eliminate private use of the land once it became a monument in 1924.

The monument has some 2,600 archaeological sites across 54 square miles (141 square kilometers), representing a convergence of cultures on the Colorado Plateau in the Four Corners where New Mexico, Arizona, Colorado and Utah meet. The region includes the Grand Canyon, the Painted Desert, Hopi mesas, volcanic cinder fields, the largest contiguous ponderosa pine forest in the U.S. and the San Francisco Peaks — a mountain sacred to 13 Native American tribes.

“That gives you an idea of the density of the cultural history here, and that continues outside the national monument boundaries into the national forest,” said Lauren Carter, the monument’s lead interpretive ranger.


The Coconino National Forest on the southern edge of the plateau has surveyed just 20% of its 2,900 square miles (7,510 square kilometers) and logged 11,000 archaeological sites, Stevens said. Forest restoration work that includes mechanical thinning and prescribed burns has given archaeologists an opportunity to map sites and log items. More discoveries are expected because of the current wildfires, especially in the more remote areas, Stevens said.

The arid climate has helped preserve many of the artifacts and sites. But it’s also the type of environment that is prone to wildfires, particularly with a mix of fierce winds and heat that were all too common in the U.S. West this spring as megadroughts linked to climate change baked the region.

Stevens recalled working on a wildfire in 2006 in the White Mountains of eastern Arizona and a prison crew coming across a great kiva — a circular stone structure built into the earth and used for ceremonies. “That was something that was really notable,” she said. “Where we’ve been having fires lately, we do have a lot of survey and a lot of knowledge, but we’re always ready for that new discovery.”

Nez, too, has made rare finds, including two Clovis points and village sites on a mountainside that he wasn’t expecting to see. 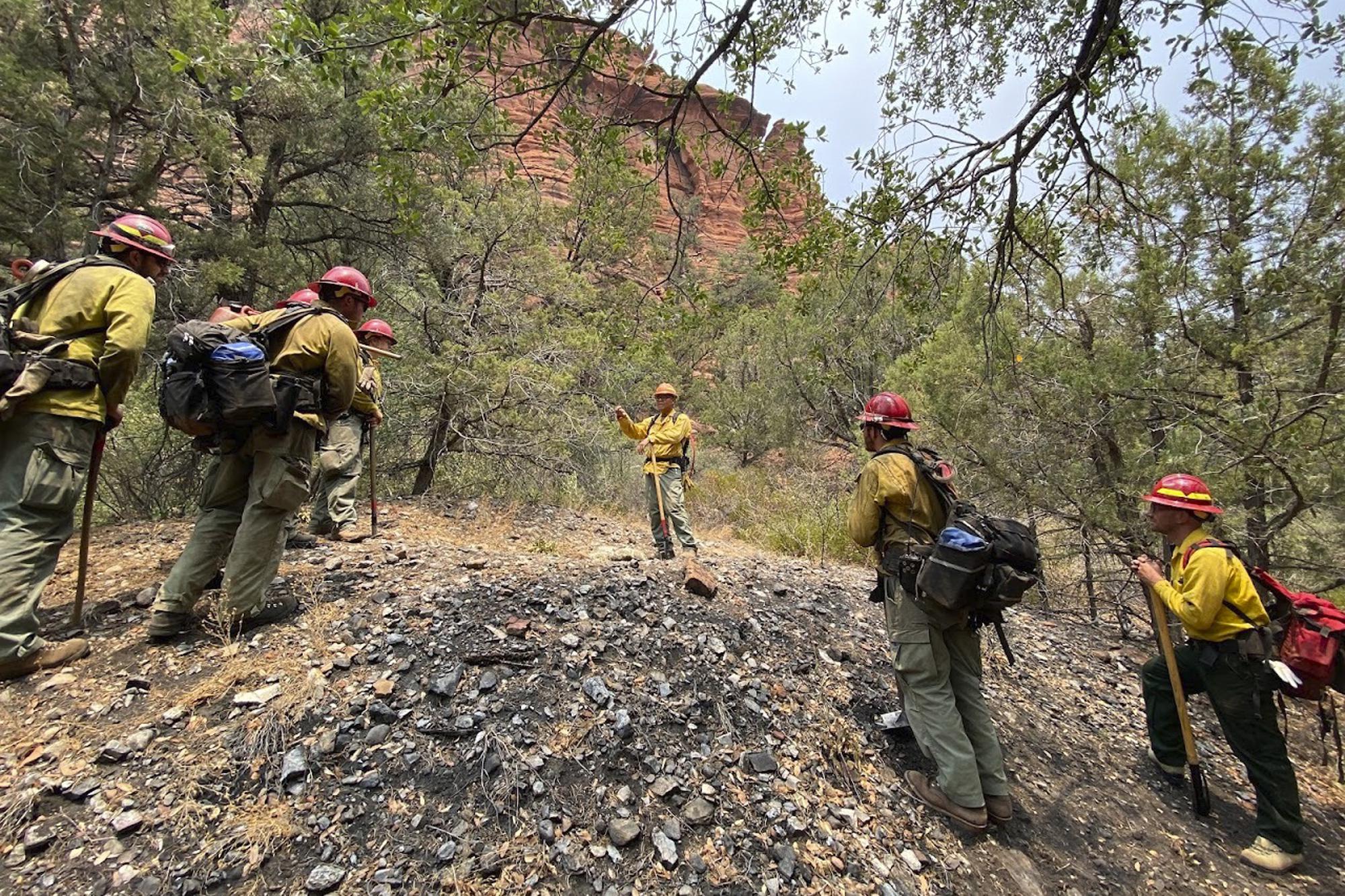 FLAGSTAFF, Ariz. (AP) — As Jason Nez scans rugged mountains, high desert and cliffsides for signs of ancient tools and dwellings unique to the U.S. Southwest, he keeps in mind that they're part of a bigger picture.

It would be hard for me to wade through artifacts and fight a fire. I know around here when a fire burns through a good cliff site ,im gone like a bullet.
K

Thanks for posting that 👍

I walked an acreage once directly after a desert fire. In my case it was like walking across a bare asphalt Walmart parking lot with treasure just sitting exposed on the black surface. Like an Easter egg hunt for three year-olds where everything is obvious and out in the open.
You must log in or register to reply here.