I found this on the side of a nearby dirt road, early yesterday morning, after a heavy downpour. I'm hoping it's as cool as it looks. 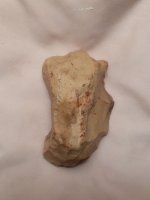 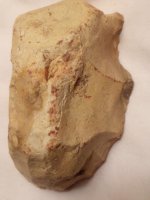 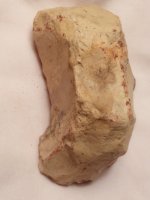 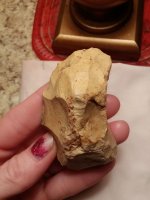 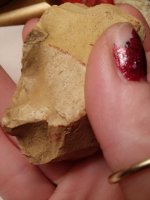 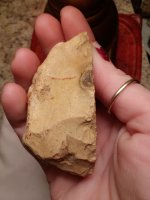 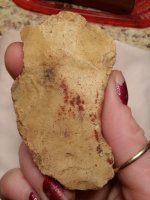 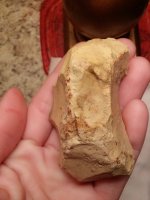 It ;looks like a flaked chert biface
Upvote 0
OP
M

What's that mean exactly? What's a biface used for? And it feels and looks a lot like flint
Upvote 0

mill-Z said:
What's that mean exactly? What's a biface used for? And it feels and looks a lot like flint
Click to expand...

It was something they started but discarded for some reason.
Upvote 0
G

I'd say artifact. Also LOL at your title. I've heard these referred to as speed tools, the assumption being that a person knocked a few flakes off of a rock to make a tool that was then discarded after the job was done.
Upvote 0

Did u put a polish on it to make it shiney? I would say from the first photo that it is hand molded clay(edges show air bubbles) and not shale or a native style worked rock.
Upvote 0

mill-Z said:
What's that mean exactly? What's a biface used for? And it feels and looks a lot like flint
Click to expand...

Biface simply means it has two faces. Most knapped pieces fall into that category. Think arrowhead ... you can lay it on one face or flip it over and lay it on the other face. Two sided.

Your piece was broken off a larger rock creating a "spall", which is just a large flake. The secondary chipping is almost entirely chipped on only one face. ("upwards", as viewed if layed on the flat face)

Generally, this type of tool is referred to as a Uniface tool ... note the chips only going towards the upper face, leaving the edge as low as possible. Right down at the bottom, if layed on a table.

Google "Limace Artifact" to see other examples of this type of flint knapping.
Often the purpose of this approach is to use the tool more as a scraper rather than a cutter.
Think of sliding your rock across a fish ... doesn't cut the skin but forces the scales upwards and popping off.
Think of scraping a hide ... pops the little pieces of meat upward, leaving the hide clean, but without cuts or holes.
Your tool was meant to lay flat and slide flat while being used. It is an artifact.

edit to add: hump back or turtle back are terms also used for this type of tool, and, yes, I believe yours is flint. (in the states the terms flint and chert both get used ... it's a long twisted conversation about the difference ... lol ... you could use either term and be understood)
Last edited: Sep 18, 2021
Upvote 0
F

In my opinion any flaking done was done by nature. Natural, not altered by man.
Upvote 0

Looks natural to me too. It does look like chert though. Gary
Upvote 0

Indeed. It’s is a chert artifact. It’s a nearly worn down unifaced scraper.
Upvote 0
You must log in or register to reply here.