Any ideas whether this is real or fake? Now, as it was found around an estuary north of Jacksonville, I have my suspicions. However, it may be a Mel Fisher that was tossed for who knows what reason. 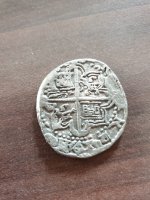 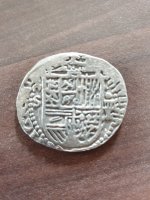 xrdax said:
Got This Coin from Ebay 10 yrs ago. The coin and COA were framed together, I paid about $295 for it...
I would like to know your opinions Real Or Fake?. Thanks
Click to expand...

www.atocha.com
Has photos and prices.
R

mlemcg said:
Does this look real or fake? Thanks in advance...It's in an auction and they say it's real. I'm wondering because the setting and coin are both of gold/silver shades. It seems like one would be different than the other one.

smokeythecat said:
Xrdax, yours is genuine. It has rather severe salt water damage. That is typical of coins that have been the ocean a long time.
Click to expand...

This piece is a cast replica 2 Reales produced by the Atocha Treasure Company (ATC)... in their signature "Atocha 1622" hallmark bezel. They produced many different Atocha-type coin replica casts over the past decade-plus. If you see a piece in one of those bezels, it is almost certainly one of their casts.

A twin for comparison:

Now, as for the piece that started this thread...

This particular style of COA - kind of similar to certain Fisher certs but with its own distinct font for "NUESTRA SENORA DE ATOCHA" - was (/is?) a version sold by Gulfstream Rarities. As I and several others have pointed out on here and elsewhere, their "1715 Fleet" framed 8R "coins" (AND also even their 1/2R pieces), plus their Hollandia wreck purported ducatons, have been shown to be cast fakes.

As for these purported Atocha pieces of theirs... I have never seen any pattern of repeated identical imprint/stamping/"die" which would confirm that they are casts. Also, just looking the pieces themselves (have seen a number of eBay listings/photos over the past decade), my impression is that they ARE, amazingly enough, genuine coins.

IF genuine, are they in fact Atocha? Who knows... though all the pieces I've seen are correct style-wise in terms of dating. If I recall correctly, though, I don't believe that the "85A-______" Coin Number given on these certs will show in the Fisher database. Amusingly in this case, though... note that the number printed is "000000"!! Whatever the nature of these, obviously a goof there.

One might theorize that the Fishers would have sued this outfit if anything were amiss... given the fact that Gulfstream used the Fisher and "Treasure Salvors" name/logo on their "COAs". However, Gulfstream's confirmed 1715 Fleet casts were sold with facsimiles of Fisher's old Cobb Coin Co. half-sheet sized certs... so again, who knows.
You must log in or register to reply here.

A Pillar Dollar with modern history

Need some assistance in IDing this ? coin /? pendant / ? metallic content