Found today in Culpeper County, VA. There is a lot of iron in the general area. (within 10 miles) Mostly as magnetite sands and some hematite. Nothing mineable. Not enough concentrations. Now 25-35 miles to the west they mine GOLD. But not here. Found on the top of a hill, no creek nearby although this ALMOST looks creek worn, but the surface is NOT smooth enough for that. Haven't completely washed it yet. It is slightly magnetic. Made the MD scream.

It was found 200+ miles south of the closest glacier morraine, or whatever that word is, so that is out. (The place the glacier dropped its rocks).

Not hot enough for the pinpointer however. Did a few rudimentary tests. First, it is not where it should be. Rounded rock, some MINOR pitting or corrosion to the exterior, no sharp edges. Top of a hill.

Slightly magnetic. No mines around.

It does have a crust of sorts to it, not deeply pitted like slag. Streak it black on unglazed porcelain. Was hard to get. Still encrusted with red dirt, but appears to have a crust on it.

Ground a window in the rock on the broken end 1200 grit, you can see a pattern (weak pattern) inside and bright steel colored specs. I only cut a small window in it. 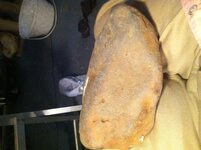 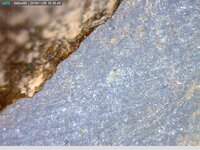 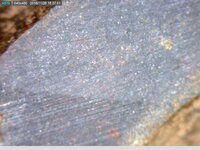 I did try all the home tests. All pass. Not sure on streak. It is trying to leave a small darker streak but not red at all and not quite black, hard to get anything to come off it. Tried to use a ceramic saw to cut a slice off and all I got was a lot of sparks. I can have a scanning electron microscope done cheap. Will probably do that next.
Last edited: Nov 27, 2016
Upvote 0
OP

The specific gravity is 2.92. Not heavy enough for natural magnetite. Looking better.
Upvote 0

I'm going to guess you have a chunk of Maghemite

I have a few metallic meteorites and they all make a pinpointer scream. They were purchased, not found but they are genuine. All meteorites I have seen are a much darker color than your find but there may be other types I am unaware of. The big ones at the American Museum of Natural History in NYC are all very dark metallic looking ones. Good luck with your ID, hopefully it turns out to be a cool find.
Upvote 0
OP

The color of this one is battleship grey, the brownish scrubbed off and iron out took the rest off. I am planning on putting it on the deck forever, AFTER the nickel test kit gets here tomorrow or Wednesday. if it tests positive for nickel, it is a meteorite. Nearest natural nickel occurrence to where it was found is 500 miles away.

Looks really nice on the inside. This would NOT be a nickel iron type. More of a chrondite type and there are a LOT of those types around. If all else fails I'll send it California to get a SEM for it. Those can't be argued. 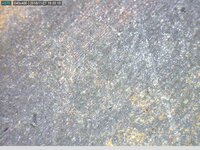 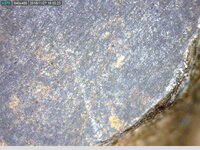 Wondering what kind of grit you used. Diamond wet saws even take forever to cut a slice of a meteorite, and hours and hours of sanding. If you have a meteorite, it doesn't matter, since meteorites are not from this earth. There are also different types of meteorites - like the ones that are most numerous, stoney meteorites (not as much nickle) and some that barely have a magnetic influence. Finding someone knowledgeable is getting harder and harder. Most of the universities that USED to do them, no longer do it, because they were buried with meteor-wrongs. If you can take one cut (again, diamond-bladed wet saw, then look up the formula for bringing out the pattern (on line or in books, they will give the formula), then you have a chance of getting one to look at it if they can see it on a photo. The bad news is that not all types of meteorites have the.Widmanstätten pattern. Good luck!

This one would not have Widmanstaten lines on it. It is the rocky type. Only the nickel iron heavies have that. I cheated getting a window on it. Put it to a hard flat lap on a Graves faceting machine. My gut feeling is it's just a really odd rock, but....nickel test will let me know. Or the scanning electron microscope.
Upvote 0
OP

I put the el cheapo variety of nickel testing solution on it...minor, ever so minor nickel. I'll try the solution on a real meterorite and make sure it works. And I did that. My REAL and expensive Canyon Diablo meteorite, per the instructions on the little bottle, does give off a dark reddish brown color. The NEW big piece does that same, but in a much lesser amount, which proves the presence of a minor amount of nickel. Now to go outside and pan the drainings from the roof to see if there are any micrometeorites there! I do have a tektike type I found near Las Vegas years ago.
Last edited: Dec 4, 2016
Upvote 0
M

Hi Smokerythecat, From your pics I see the little white dots which would indicate Chondriles (sp) and the other good news is I see no Vesicles or bubbles in your pic...vesicles would indicate oxygen and no oxygen in space. From memory, Nickel is only a small percentage of certain meteorites. like 5-8 percent. Really looks like a meteorite to me...Crossing fingers for you...MinerGirl
Upvote 0

Then, where does it come from? How do we get ice comets if water is H2O?

Oxygen is an element - made by fusion in the heart of suns like other elements between Helium and Iron in atomic weight.

Hi Charlie P. (NY), Pretty much I need to re-study my facts. I'll get back to this subject. I do remember that if there is a vesicle flow to a rock that it would not be a meteorite. The vesicles show as "burst" bubbles in the rock. Also any "flow" of the rock would indicate it not being a meteorite.
Upvote 0
OP

Minergirl, good observation. If it is a meteorite it's the stony type with minor nickel. specific gravity 2.92. and yes, there are no vesicles or bubbles. It should in San Diego today, getting ready to get tested. Might also make a good garden rock...
Upvote 0
M

Thanks...Exciting it's already being looked at. How long did they say it takes to get an answer?
Upvote 0
OP

BTW it's not a meteorite. Clinochlore with high iron content with albite feldspar and quartz. A couch potato rock.
Upvote 0
You must log in or register to reply here.