I left out around 10 AM, the plan was to door knock. I had the names of the owners for the four properties I had listed. First knock was a YES.

The owner just wanted to see my finds. My 2nd plug was 2 to 3 minutes into the hunt and produced the Buffalo.

This place is virgin, but with much soil moved over the century. About 1.5 hours in I dug the Rosie with 4 wheats in the same plug.

Moments later the next plug uncovered the Merc.

Wheats were everywhere. I ended up digging 20 of them (1916 - 57D). Most of the wheats are from the 50s. Four hours in I got a big high tone, I thought to myself "here's that bucket list barber" and sure enough about 6" down I reached in and pulled the silver half out, and by god it is a Barber.

How cool is that. 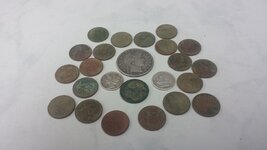 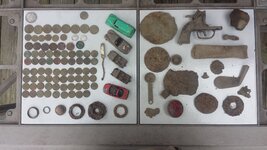 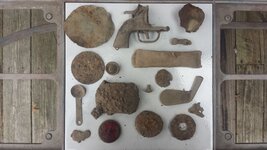 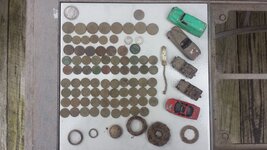 As always, I hope ya'll got out and swung the coil

Good lord man you hit a sweeeeeeeeeeeeeeet spot. Way to go on great research and social engineering into getting the permission. Great finds good sir

You sure did dig a bunch of signals that day!! And then a barber half... Wow... Very COOOOOL! Nice post with the Emoticons...

Your persistence and precision are always a sight to behold. Love to see that kind of work rewarded with another check mark on the old bucket list. Never having dug more than a quarter sized silver myself, I can't imagine the fun and thrill of a barber half coming out of the dirt. WTG dude!

Congrats Loco-Digger on the Rosie and the BARBER!!!!! Ya never cease to amaze us!!!!

Way to go Loco!!!! Man your off to a great start this year!!! Congrats on the nice looking Barber!!!!!

Loco - I've been off the grid lately, but glad to see nothing has changed with your great finds. Great job...Brad
D

Halve are a thrill, but a Barber is thrillier.

Detector(s) used
Etrac and Ace 350 and a Gold Bug now.

Fine looking half! What a day and I hope you have many more at that spot!

Nice! That's too cool. You deserve it Loco! Especially for how long you've been at it for.

Congratz Loco! You're starting to have a pretty good year too! That's 2 bucket list halves in as many weeks, right? Keep it up!
J

You were quite busy

Congrats on scoring a really nice coin! Very well done my man!
You must log in or register to reply here.