Hey guys I’m curious about this button all I can read on the back is “& Son”
“London”. Any idea what style this button is called and how old. And with that would you know the whole maker?

Thank you so much DCMatt said:
Start with this:

Notwithstanding that it could be from a lesser maker or a custom-made button for a tailoring company, among the leading button makers in London there are only a handful who used "& SON" (singular, rather than plural as "& SONS") for their backmark. Stillwell was one of them. Nortzell was another. Although the last letters of the surname are only partially readable on your button, I can't readily see a surname ending '...ELL" as a possibility. I'm pretty sure It's not "GAUNT & SON" either.

Maybe try cleaning it up a little to see if those last letters of the surname lead us to a maker.
Upvote 5

Stillwell looks like it fits now that I put my glasses on.

If it is Stillwell, note that several sources misleadingly give the company date as “before 1840”. I don’t know why, but they are all probably feeding from the same incomplete information source.

They ceased trading around 1957. That particular button backmark show by Matt above is from a pattern 1901-1921 Royal Naval Reserve uniform button.
Upvote 1
OP

DCMatt said:
Start with this:

I’ll admit I got to get my research game up but I’ll look through every picture I could find but I think yours is right it’s plain So not much to identify. Do you know the name of this button made it has a very oval top
Upvote 1

Truth said:
Is that my button?!?
Click to expand...

No. Matt was just showing it for backmark comparison. As I said, that one is from a Naval Reserve button, pattern 1901-1921, which had a crowned anchor front like this: 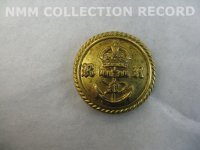 I don't think it's going to be possible to attribute your button in the absence of a design but, given the wide variety of goods produced by Stillwell & Son, it can't be said for sure to be military. My guess would be that it's civilian (coat/blazer) and likely late Victorian.
Upvote 2
You must log in or register to reply here.

I need help identifying these balls

R
🔎 UNIDENTIFIED Needing help identifying the backmark on this button

C
🔎 UNIDENTIFIED Help IDing a button with Lincoln on it?