CHASED TO MONTANA
W.O. Sayles, a Pinkerton detective, had been dispatched to investigate the Wilcox, Wyoming, train robbery that had occurred on June 2, 1899. However, he was soon called off that case and sent to Montana to work on a clue as to where some of the stolen money that had been sent to the City of Washington had come from.

BOLDEST ROBBERY EVER
––––––––––––
Just before the bank’s closing on Monday, Oct. 14, 1901, a well-dressed woman walked into The Fourth National Bank of Nashville, Tenn., where she hoped to exchange some crisp new bills for less troublesome currency. She placed a bundle of $10’s on the marble counter and asked bank teller McHenry for $50’s or $100’s in exchange. All may have gone well for this would-be passer of stolen bank notes had McHenry not become suspicious, but he did. And, after consulting a circular detailing the serial numbers of missing notes, he summoned the local police. The stolen notes were from an assault by Kid Curry and two others on Great Northern Transcontinental’s express train No. 3 near Wagner, Mont. on July 3, 1901, as the nation and the train’s passengers anticipated the Fourth of July.
After effecting the robbery, aided by a liberal dose of dynamite, all three disappeared in the ravine and were seen later, one mounted on a bay horse, one upon a white horse, one upon a buckskin, heading southward at a furious gait, the booty being plainly visible in a sack thrown across the saddle bows of the rider upon the buckskin horse.
The gang headed for the Little Rockies range, lying across the Milk River, in an almost inaccessible country, consisting mainly of badlands. Posses were immediately organized in pursuit.
Kid Curry was involved with the gangs that robbed the Butte County Bank at Belle Fourche, South Dakota in 1897; that held up a Union Pacific train at Wilcox, Wyoming, which netted them $36,000 in cash, plus $10,000 in diamonds, and an undetermined amount of bank notes on June 2, 1899; that robbed the First National Bank at Winnemucca, Nevada, of over $30,000 in 1900; and that got $35,000 from a Great Northern train at Wagner, Montana, in 1901.
Could Kid Curry, his brothers, and the other gang members, have loot stashed in the Russell Country region of Montana? They must have hidden the money somewhere, and they did spend a lot of time in the area. Perhaps, someday, the rest Kid Curry’s loot will be found.
OP
T

Hope it all popped in ok. This is the last story in our 4th book in the series on the historical lost treasures of Montana. 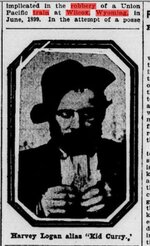 Remember years ago Jeff, when folks would post things like, ;I wish my wife would get involved with my hobby;. Doing books on lost treasure, she would formate and the cover work and upload them to create space and Kindle. Now I just select the stories to cover and she researches them. Presents her discoveries and I read thru them and decide if they fit the story. After a few proof readings we have another book done.
OP
T

This Chased To Montana is something she came across. It covers Wyoming, Montana and down into Old Mexico and is the Pinkerton side of the story. Still is was interesting and goes into the book. Since my market is not metal detecting or hard core treasure hunters it works. The real market using lost treasures and regional history is the tourist industry.

This was a great read!
OP
T

Glad you liked it. Thanks for posting your opinion.
You must log in or register to reply here.