Hello. I found this at a flea market and was wondering if it is authentic. If it is a reproduction, do I just get rid of it or do people collect repro. Civil War items? Thanks for any help you can offer! 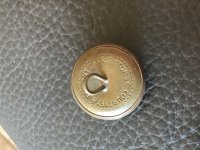 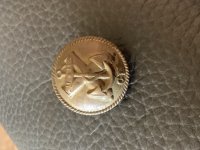 badchihuahua said:
Hello. I found this at a flea market and was wondering if it is authentic. If it is a reproduction, do I just get rid of it or do people collect repro. Civil War items? Thanks for any help you can offer! View attachment 1948832 View attachment 1948833
Click to expand...

It looks too amazingly new to be that old, but one never knows...someone here smarter than I will give you the correct answer. Everything is collected by someone or other.
Upvote 0

It looks like the Confederate Navy button shown as CS75 on page 364 in Albert's book. I believe you have a good button!
Upvote 0
OP
B

Thank you!
Upvote 0
OP
B

(Sigh) No-no-no-no-no! Although this button is shown in a photo in the Albert button-book, it is NOT "a good (real, original civil war) button." It is shown as a modernday reproduction. Mr. Albert politely called it an "unauthenticated Confederate" button, but it is absolutely a deliberate fake. Please read Mr. Albert's analysis of these buttons on page 363. Among other details, he says they were made in England in 1969.

In addition to the very weak detail of the emblem, the brass-wire loop is entirely incorrect for actual British-made Confederate Navy buttons. The correct loop looks like a perfectly-round car tire (with no hub in the middle) standing up on the ground. The fake's loop looks like (as in seen in poster Badchihuahua's photo) a long horseshoe with its two "legs" soldered into two separate holes in the ground.

Also, unlike on ALL of the original civil war Confederate Navy buttons, this fake's backmark is written in "plain block" lettering.

Badchihuahua, I see you are a brand-new member here at TreasureNet. Welcome to T-Net's "What Is It?" forum, the best place on the internet to get unknown objects CORRECTLY identified. (Please do not trust what Ebay sellers say, or even WorthPoint.)

Thank you so much for the detailed feedback. I appreciate you taking the time to let me know!
Upvote 0

By the way:
After I posted, I realized my description of the "real" CS Navy button's loop might ne hard to visualize. So, I've added a photo to my previous post, to show the "tire standing up on the ground" perfectly-round shape of the wire loop on actual original civil war era British-made Confederate Navy buttons.
Upvote 0
OP
B

That helps. Thanks again.
Upvote 0
You must log in or register to reply here.

What are the markings on this WWI Mess Kit Knife?