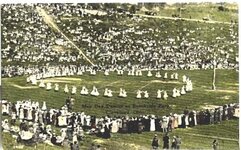 I lived right across the street from here about 5 years ago.
It is part of the MetroParks system now. And you will need a permit.
The problem is..The park is only open during Softball season and they block off the roadways.

Best bet is to park on the Brooklyn side and walk down the hill to the park.

You can get a permit at the metroparks headquarters at the zoo.
I wouldn't recommend detecting there alone anytime of the day. And you cannot use your CCW there.

I visited there the other day 4/31/09. The park is a lot different than it was back when that photo was taken.

There has been lots of back filling done to elevate the softball fields to prevent drainage problems. At least 4 feet of dirt has been trucked in a few years ago and so anything of value in the southwest area of Brookside Park is under 4 feet of dirt.

There are other areas that are still as they were when the photo was taken, but there is so much trash in the ground so a small coil is the ticket to finding anything. I am using an E- trac with the 11 inch DD coil which is too big because of all the trash. Found some modern day clads but nothing old. No silver. I am sure it is there....but I am also sure this area has been hit pretty hard by detectorists. The areas around the rim of the hills above may be prime areas as well as the side of the hills. They are overgrown with trees so hunting will be tough. But I am sure that because of that, few have detected there.

As far as crime goes, lots of park rangers were present so crime was not an issue. Lots of people were there and so no criminals would be active in the area.

Cleveland Metro-Parks permit is free. All you have to do is call Mike barhardt 216-635-3264 and he will either email you one or send one in snail mail. Either way he is a very nice guy and happy to do it.

- You can hunt on the beaches after swimming season only and can dig up to 12"...on beaches only.

- There is no digging what-so-ever anywhere else in the park. Surface finds only.

- You must have the permit on you while detecting and it is only good for you...not you and three people with you.

- Any historical finds must be turned over to the main office of CMP. CMP will give you fair market value based on their own estimates.

Still all in all not a bad deal since it is free and there are plenty of CMP around this area.

I just applied for mine, all the same rules apply still but you van now add dependents to your permit. So I added my wife and kids. Permits are still free too!
H

Nice honeymoon...last year I see a couple of hunters in the water at Wallace lake. .that you?

Sorry aurocorrect took over...honeyman...
You must log in or register to reply here.