Creeped out on today's dig.

So we hit our fav park about 6:30 this am. In the woods cuz so dry out. No one at the park as usual. We were finding some coins and having fun. These woods were so thick you could barely swing. 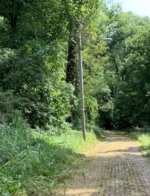 About 7:30 I hear something behind and there's a big guy following us about 15 ft. back holding his pants up. He said he heard voices and apologized for startling but made no move to go. Brain said GO so I headed out asap with honey on my heels. Creepy vibes. After he wandered off, we went up a hill to hit some other woods. Just as we got there, he comes out of the woods just looking at us. Grrr. So we went back to the truck and drove to the far side of the park. Not good digging but oh well. Guess who shows up! I don't know how he was getting around there so fast. We were totally creeped out and called it a day. Not a fun day. Got a buff, 3 1919 wheats and a 1918 wheat. And always some what's its! 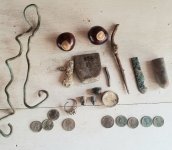 Lots and lots of weird people about these days,probably did the right thing.

Creepy, you did the right thing.

Congrats on your finds!

Congrats on the hunt!!! Bummer on the bad vibes!!!

head on a swivel comes to mind, you did good

Weirdass joker. All the more reason to protect the 2nd Amendment.
C

Did he try and smell your wifes hair? Creepy

Could have been really spooky if he was sitting on your front steps when you arrived home or on the swings in your back yard.

Totally those vibes!! I don't know how he got as close to us as he did as knee deep poison ivy, downed trees to crawl over and limbs everywhere. I am still creeped out. Can't go back there for awhile. Yeesh.

I was hoping for a few pics of the creepster....maybe Garrett should add a tazer feature on the Carrot. That would have been even wierder

I always figure if someone gets too close or aggressive, he will find out what a stainless steel digging tool with a serrated edge feels like

Detector(s) used
Call for your Treasurenet special discount! Be sure to mention Tnet when you call!

Looks like a cool park to hunt!
OP
L

It is. It was a great park in 1900 with dance halls and a theater. All that is gone. Now horribly neglected and overgrown. No one hardly uses it but dog walkers and homeless. We've never had an issue with either.
D

Weird for sure but glad it turned out ok. The wire on the left side reminds me of the wires wrapped on the glass insulators on telephone poles circled in Red.

People are nuts. It started out sounding like Deliverance! Maybe he?ll be away from there next dig but you got some nice saves anyway. Way to go!

With creepy people like that I am much more prone to just
addressing the situation. I figure if I just walk off and leave
then the same guy is going to creep out someone else, and
maybe harm them.

Had that situation a couple times, and in both cases after
noticing the creepy person following me, I just set my
detector down, took off my headphones and set them
down (like I was taking a break), lit a cigarette and just
looked right at them, and then addressed the person.

"Howdy..I see you following me..is there something I can
do for you?"

This puts them on notice: Now they know.. that I know they're
there, and am not afraid to be direct with them. This also gives me
a distinct advantage of body position and my hands free should they
become aggressive.

In both cases all I got was: "No man..I was just curious about what
you were doing/finding."

Whatever their motives, they both went on their way and I went back to
detecting.

Both those cases were over 20 years ago, and in today's world (and
at my age) I'd have to think a bit before I'd take such action today.
In today's world, if the person appeared threatening to me, it would
be "Hey Siri, call 911 on speakerphone".

Then, without acting aggressive towards the person, I would
prepare to defend myself should the need arise.
Last edited: Sep 13, 2021

Nice assortment of finds you had going for you, before you left.
It kind of sucks and throws one's mojo off detecting when it happens.

Back in the 70/80's seemed like I had the most occurrences while detecting parks.
I got to using a big old hunting knife for digging in the soils/lawns for retrievals.
It seemed when the thick 6in. blade started to be shown-the creepers soon departed.

Only once back in the late 70's I was detecting with a family member in front of a city hall. There was like every town/city a cenotaph erected to honour the fallen.
This guy that had too many kept going on about me digging up the dead, and politely we explained there were no graves.
The result was he tried to kick me in the head while I was down digging a find, I saw it coming and he missed the melon.
I struck out and hit him in the centre chest with the big screw driver.
Well to my surprise he went down like a sack of rocks, flopping around on the edge of the sidewalk.
Lots of folks witnessed this by now, police, emergency ambulance, and me sitting there explaining what happened.
I guess my hit stopped his heart-but it was self defence as many said I was only defending myself from this idiot.

So many have posted up the fears of the furry four legged creatures that roam around-but it's the brain dead two legged ones that one has to be aware of actually.
You must log in or register to reply here.