I was helping find a lost log chain when I found this. I didn’t recognize it at first thinking it was some kind of weirdly shaped ball for a valve. When I cleaned it up I realized it was hollow and is likely a crotal bell. I found it halfway between a dumpsite probably from the 40’s and a Indian site that could run into historic times. So I’m curious how old this bell is, could it be from the 1600’s making it native around here or is it closer to early 1900’s. I’m just starting looking into it but the first bit of information mentions the way the loop is all part of the bell that it’s likely from 16-17th century. Any information would be appreciated so I can figure out if I’ve got an early trade item or a turn of the century utilitarian bell. Don’t be thrown by the patina i cleaned it with a brass brush to see if I could find any markings. There is also what I think is an iron clapper inside I don’t know if that relevant for an age determination. 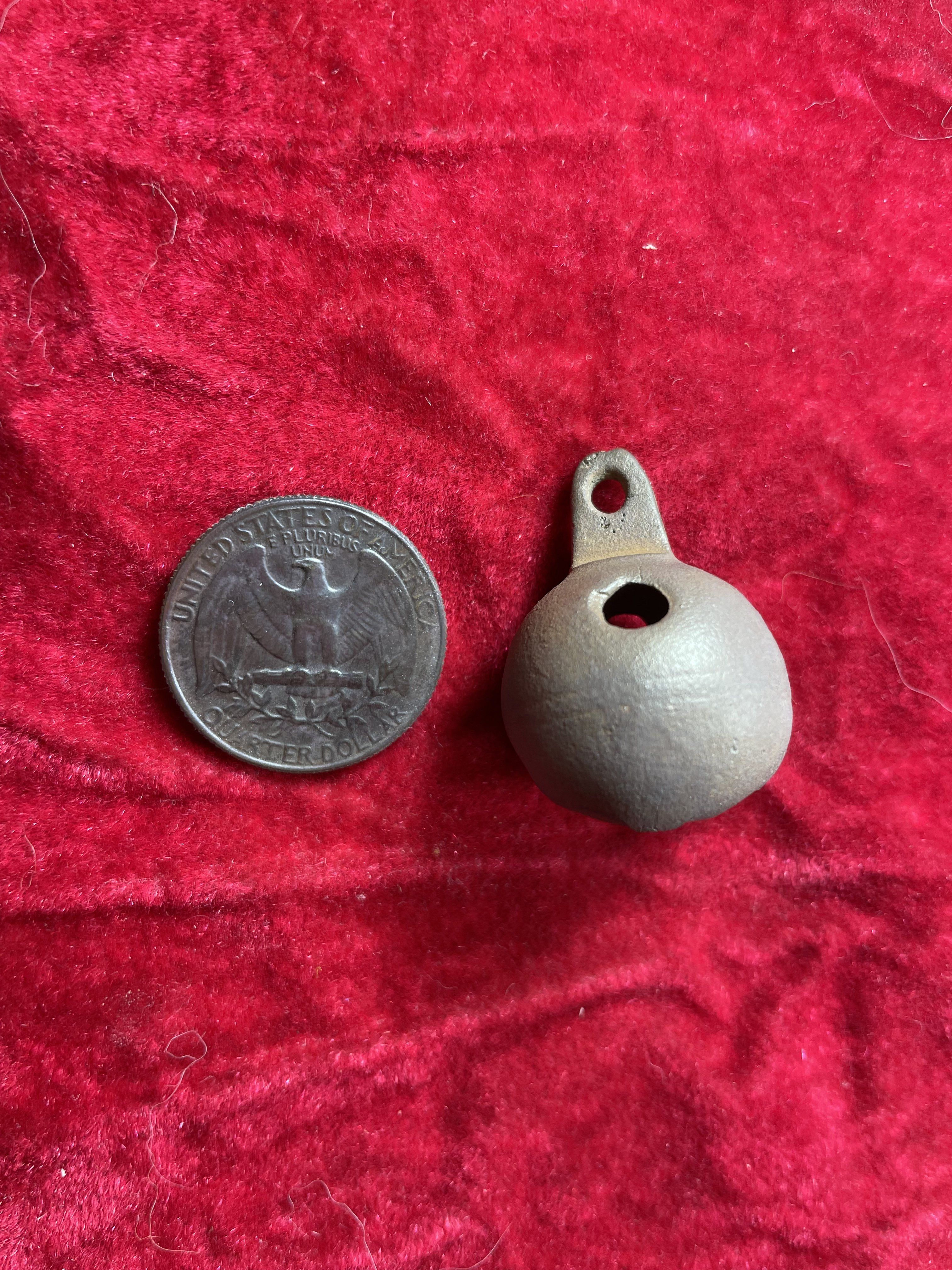 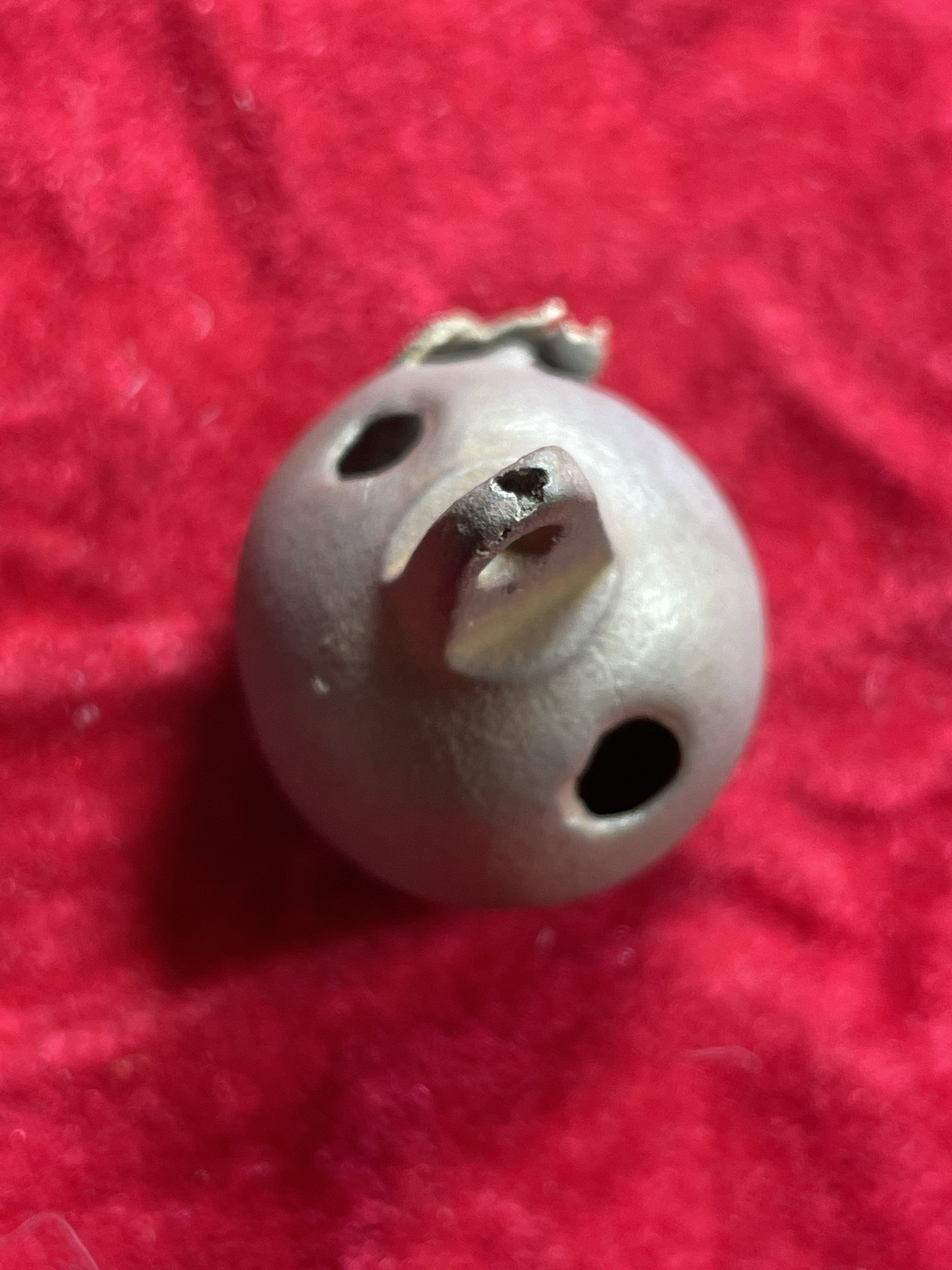 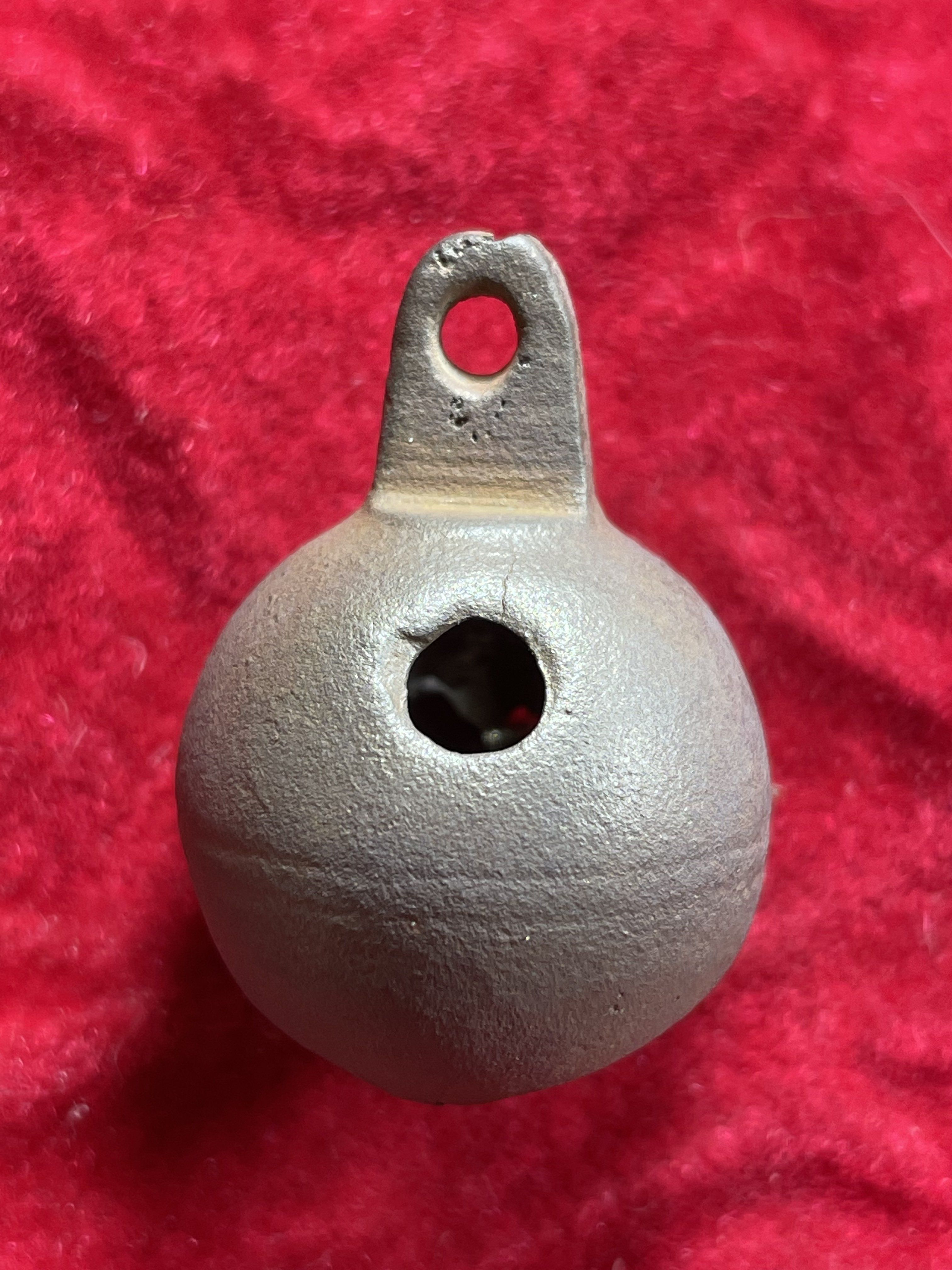 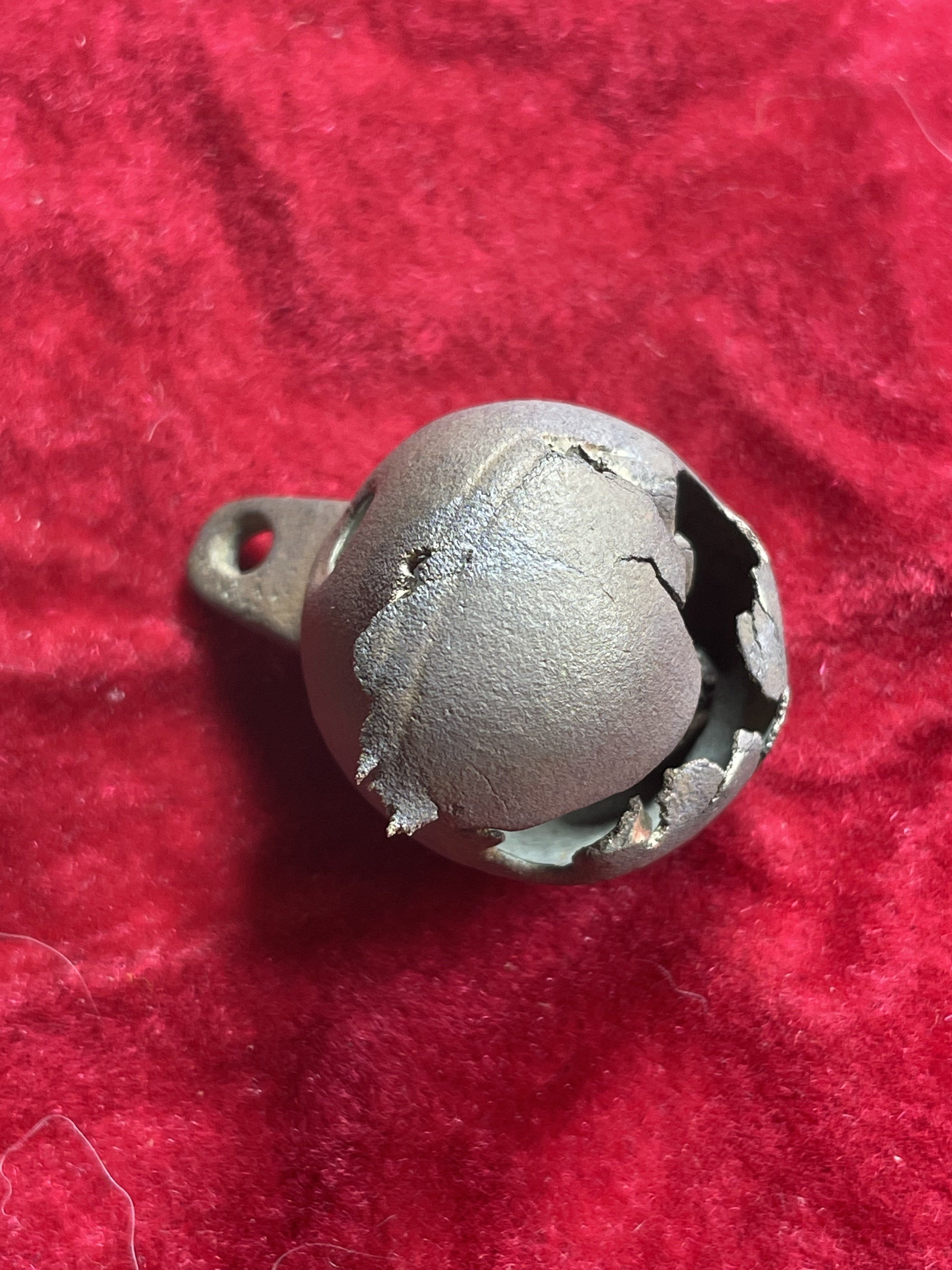 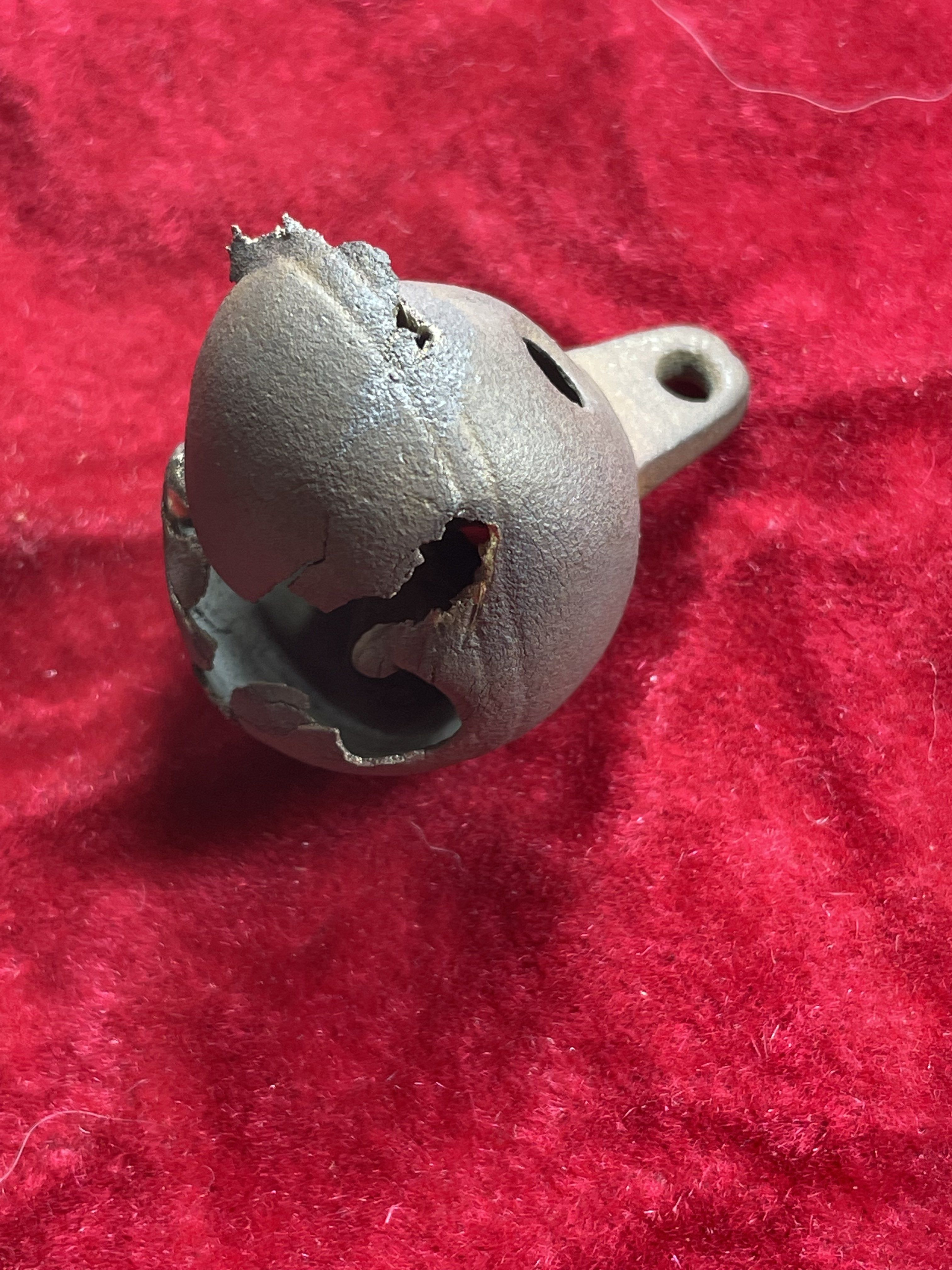 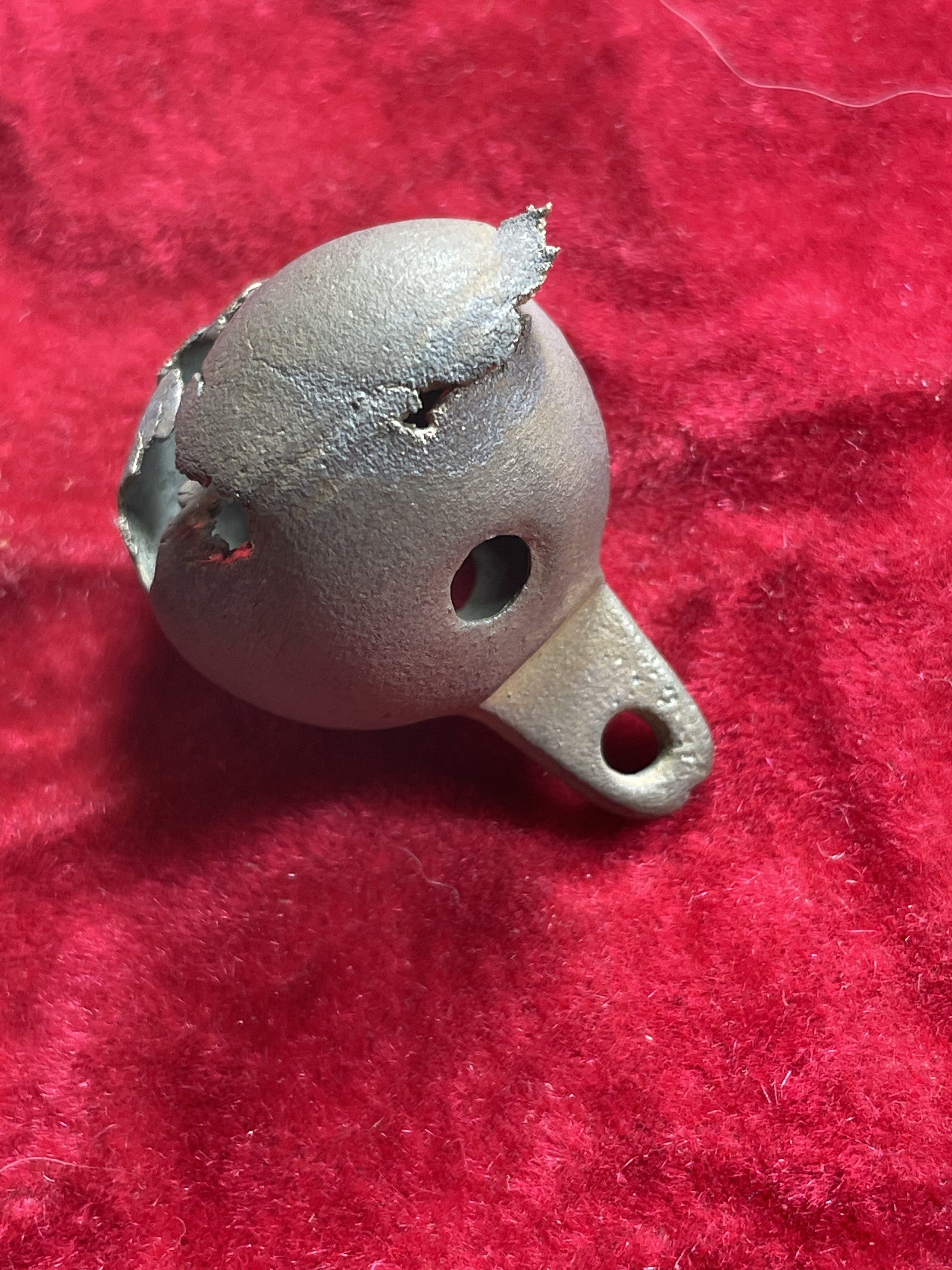 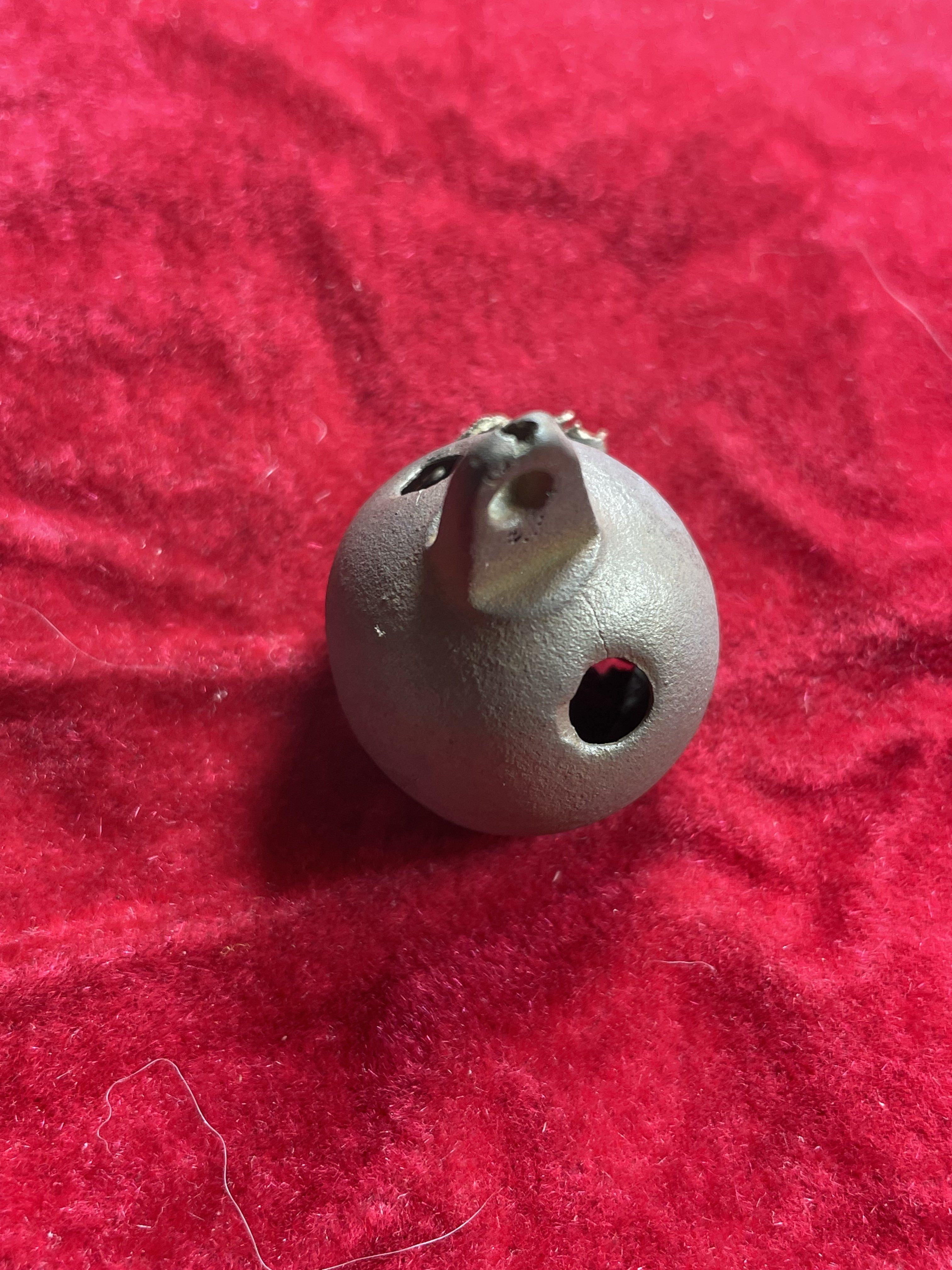 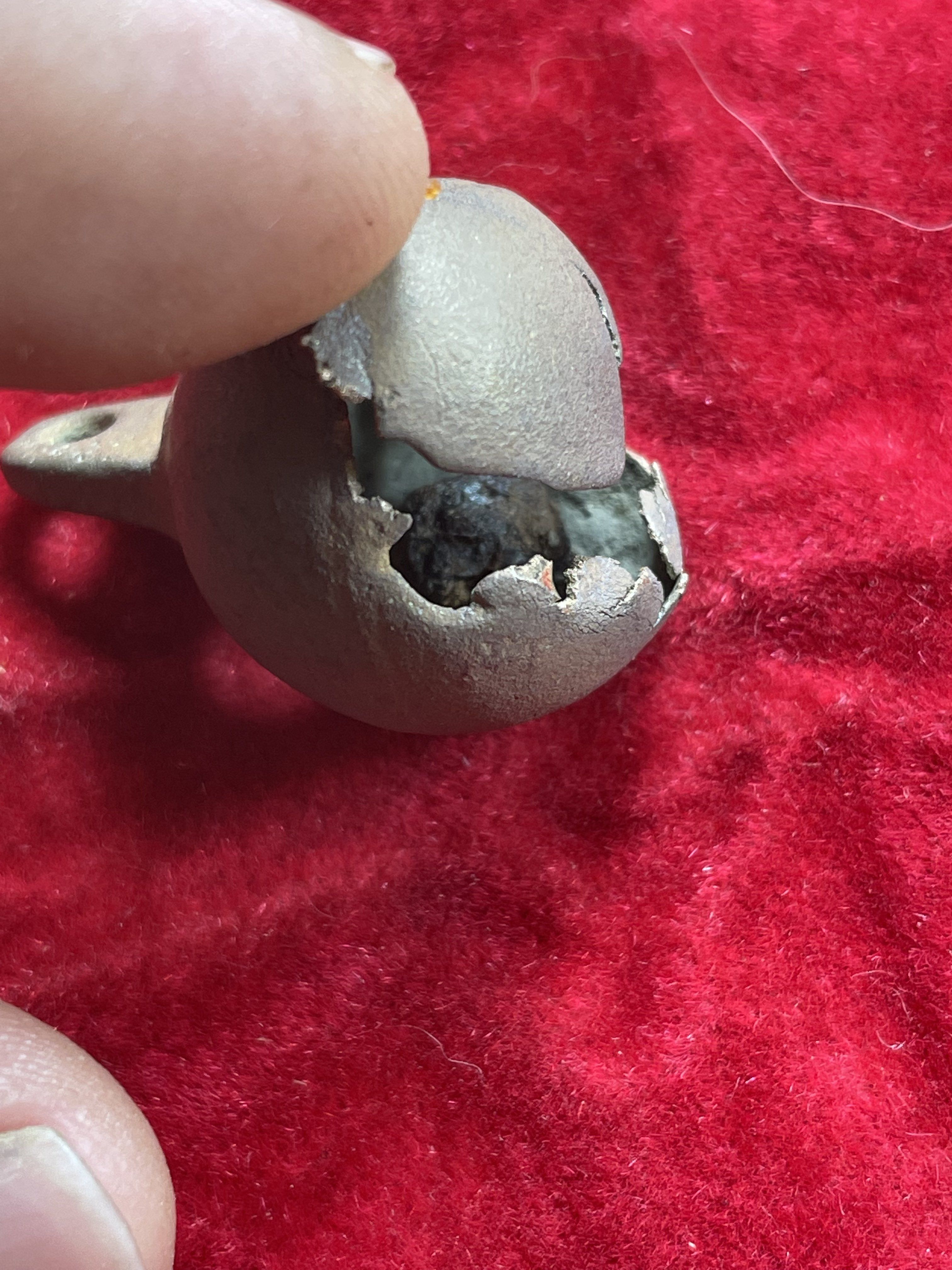 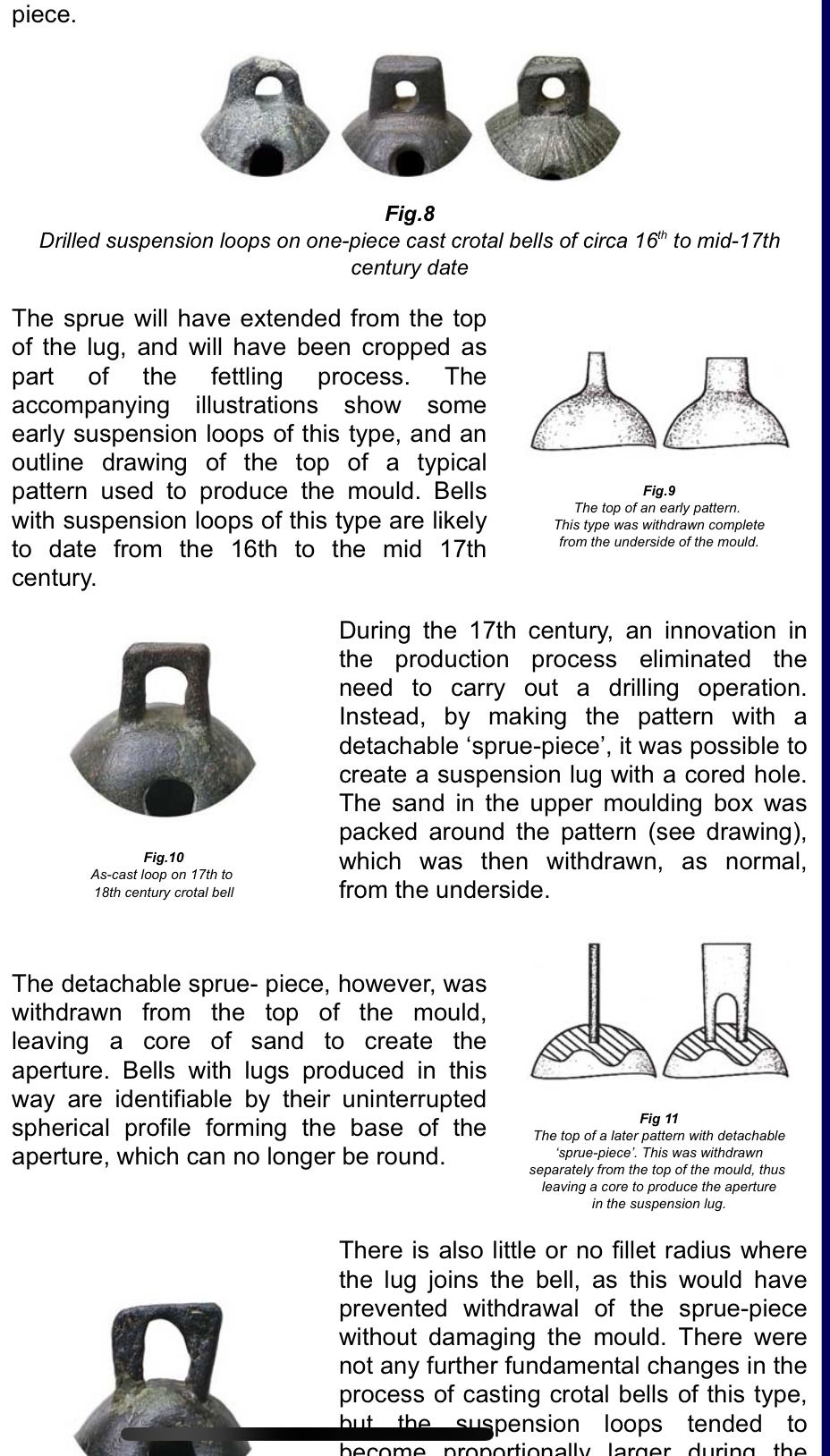 Well I’m not finding any exact matches, I want to say it’s a one piece cast bell with the iron clapper, it matches all the descriptions except about every example I see has an actual ridge around the body, closest examples I can find all point to 16/1700’s but I’m skeptical, mostly because I don’t want to get too excited the general distribution of metal objects on the property would heavily favor 1900’s… the attachment point seems to be an unusual style here’s a few I’ve found with similar attachments 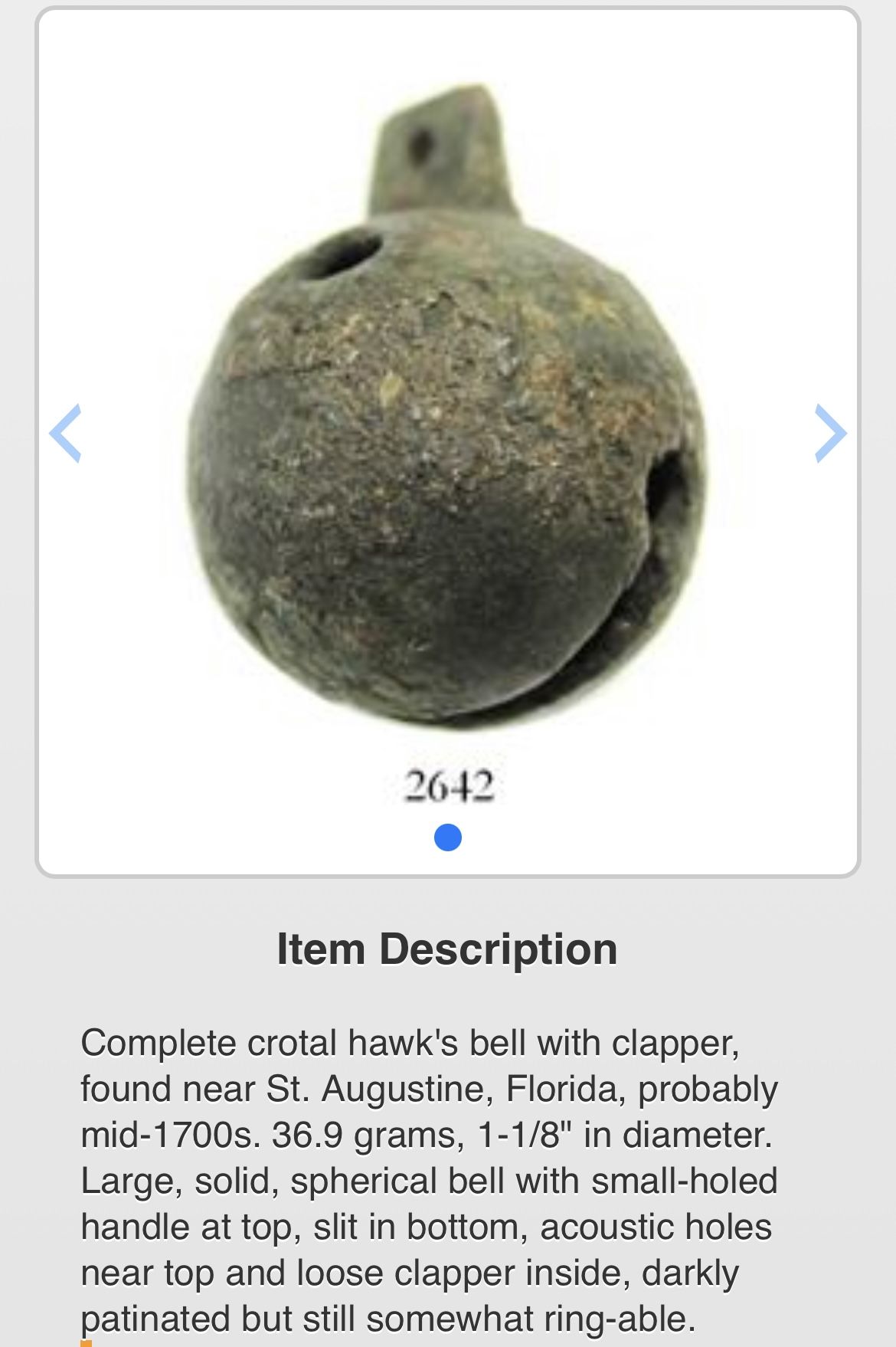 I’ll give it one shameless bump maybe some knowledgeable folks were busy last weekend, I’ve looked several times and I think I’ve found about as much as I can, I feel like it being cast may hint it’s old. There weren’t many white people here until around 1860 so if it’s much older than that it was likely native. But the “hawk” bells I see have a different style attachment. For what it’s worth I also found a couple smashed round balls nearby as well as a few modern rounds.
Upvote 3

I see you've been doing your research on the UK Detecting Database Website, I'll often refer to this site as I too find a lot of crotal bells here in Canada. I'm thinking this example most closely represents the bell you found, so possibly an Indian trade bell.

Many of the early bells were cast in alloys that have a distinctly white or grey appearance and they are often casually described either as being of pewter or having a tinned surface. On closer examination, however, neither of these descriptions would appear to be correct. Pewter is a lead/tin alloy, but the corrosion products, where they occur on these ‘white-metal’ bells, are green, thus indicating the presence of copper. If the bells had a tinned surface, it would be evident when examining fracture surfaces, but this is not the case. The metal is white and consistent across the section. The most likely interpretation is that it is a high-tin copper alloy, possibly with a small addition of lead to facilitate casting. For the present purposes, the point to note is that bells cast in this white metal are unlikely to post-date the 17th century. Apart from their colour, bells of this type tend to have a thicker cross-section than their later counterparts and are correspondingly heavier in relation to their size.

Later bells are more readily recognizable as being of copper alloy and are invariably found with a characteristic green-brown patination.

Cool appreciate the feedback, Ill be sure to keep it safe incase it is a trade item… beyond that one site there’s not a lot of info (I could find) lots of the other stuff always seemed to lead back to that site. It has great information but I feel better when I can get a few sources that agree.
Upvote 1

Older The Better said:
Cool appreciate the feedback, Ill be sure to keep it safe incase it is a trade item… beyond that one site there’s not a lot of info (I could find) lots of the other stuff always seemed to lead back to that site. It has great information but I feel better when I can get a few sources that agree.
Click to expand...

I hear you about the lack of information available out there on the types of bells we find here in North America. I would've thought someone would've published a book on the history of these, I guess you and I are the only folks who find these beauties interesting.

Last year I bought Bill Dancy's latest book - Discovering Virginia's Colonial Artifacts, as there maybe some information in there. In all honesty, I haven't even had time to open it.

Odd Metal Holder with Clay Marble In It?