Gotta love the D.B. Cooper story. Here is an update on some of the money....

Im confused -
where did they get the originating serial numbers from?
Why would cash with recorded serial numbers be on a aircraft.
Im sure theres an explanation but would like to know
Sorry to sound so ignorant
Brady

It was Marked Ransome money From the FBI

In 1971, D.B. Cooper hijacked and threatened to blow up an airliner, extorted $200,000 from its owner, Northwest Orient, then leaped from the airborne 727 with 21 pounds of $20 bills strapped to his torso. 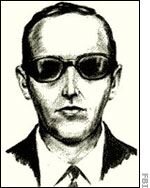 A recent guest on Coast to Coast radio thinks he has identified D. B. Cooper as a now deceased Viet Nam veteran with specialized parachute training. He's forwarded the info to the FBI for verification before publishing the suspects name, but photos, which resemble the sketches, can be seen here:

It will eventually be solved as the FBI has DB Cooper's DNA.

Some think that he hit the water and quickly drowned if he wasn't already dead- hence the money floating downstream.

This would make for an interesting movie plot:

What if there really was no "D.B. Cooper", but instead the crew of the plane cooked up the highjacking and ransom, then threw a parachute and a wad of bills out the door to throw off investigators, while they hid the money on the plane to divvy up later...? (Wow, I'm good!)
K

Zephyr said:
This would make for an interesting movie plot:

What if there really was no "D.B. Cooper", but instead the crew of the plane cooked up the highjacking and ransom, then threw a parachute and a wad of bills out the door to throw off investigators, while they hid the money on the plane to divvy up later...? (Wow, I'm good!)
Click to expand...

I think Cooper was real, but that WOULD make a good movie plot. Good thinking.

Check out... "Without a Paddle" funny movie

After their friend dies, three men decide to fulfill their childhood promise by going on a camping expedition for the lost D.B. Cooper bounty, with calamitous results.

Treasure Bunny Tails said:
So the FBI didn't record all of the serial numbers of the money handed over to Cooper. What stupidity on the part of the FBI. Someday some hiker is going to find Cooper's skeleton. I hope it's soon, I'd like to have an ending to this story. I remeber so well when it happened. He started a whole new and unpleasant trend - skyjackings.
Click to expand...

Old saying from our area FBI = Fr*#ken Bunch of Idiots. Ya gotta love the FIBIs

Your tax dollars hard at work

Here is my scenario of D.B.Cooper highjacking.
Prompted by NSA, CIA or FBI possibly to alert airports about security problems, or by financial gain by a floundering electronics corporation Litton Industries, the then CEO Roy Ash was D.B.Cooper.
Roy Ash, an Army Air Corps veteran from WW2, buys a plane ticket underneath the name of a cartoon character D.B.Cooper. He highjacks the plane with a fake bomb. He chose the Army parachute since he was well familiar with it. He opened the back cargo door which was how old Army was trained to jump from. He threw out the bag of money and all other evidence over the mountains of Washington as a decoy to FBI. Unfortunately the bag of money hit the river. What are odds of that? Then, Roy Ash(D.B.Cooper) remained onboard the plane until they were over Nevada, where he safely parachuted out onto a flat plateau area since it was night. On his way back to Work at Litton Industries in Santa Clara, CA, he stopped in Sacramento to mail the taunting letter.
Was it about airport security or financial gain? That is the question since the new airport scanners used electronic components from Litton industries. It was never about the measly $200,000 because Litton made millions on the new contracts. 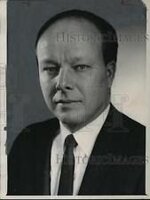 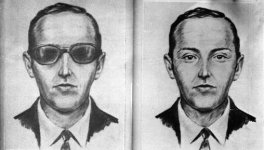 Zephyr said:
This would make for an interesting movie plot:

What if there really was no "D.B. Cooper", but instead the crew of the plane cooked up the highjacking and ransom, then threw a parachute and a wad of bills out the door to throw off investigators, while they hid the money on the plane to divvy up later...? (Wow, I'm good!)
Click to expand...

Fun thought, but reality is the Federal Reserve prints money sequentially number coded for each bank where issued. None of the 'measly' $200,000 showed up except for the few bills found on the river bank.
H

The rest of the money is still out there.

Charlie Farrel and his team started out with some good clues, but it all went fubar ... 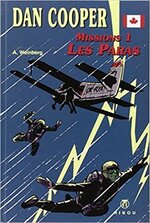 published in french only.

D.B. Cooper: Everything you need to know in 5 minutes


I believe this was 'bout as close as they ever got.......http://www.air-america.org/index.php/en/16-members/in-remembrance/150-charley-moseley

"When he was first at Alabama as a freshman he met another student in one of the cafeterias, this is the story as told by him to me, and the guy was talking about going to the Pacific Northwest to put out forest fires for a part-time job in the summertime," John Moseley said. "He'd grown up in southwest Alabama where my grandmother managed a large game estate, and we did controlled burning of the forests down there."

A fan of dramatic Zane Grey cowboy stories, Charley pursued the opportunity and worked the first summer on a ground crew, but met a couple of smokejumpers who parachuted into remote areas to combat fires. It's still considered one of the best ways to extinguish or contain blazes before they become a major problem, and has inspired numerous movies over the years.

"He just thought these guys were bigger than life," John Moseley said. "He wanted to try and be one and ended up being selected for the training."

After graduating, Moseley worked for Air America in Southeast Asia, which was covertly owned by the United States government. While most military personnel were already tied up with escalation of the Vietnam War, civilians with extensive parachute experience were in demand, especially smokejumpers that could pass the security screening.

"That's kind of originally where they started recruiting from, and it was all word of mouth," said John Moseley, who was subsequently born in Bangkok, Thailand. His father's job as a "kicker" was to deploy cargo out of the back of a flying plane (while making sure he didn't accidentally go with it). 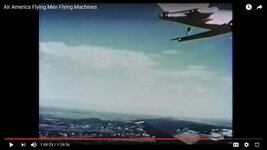 The second most used language in Laos, especially Vientiane, was French.
So "Dan Cooper" comic books may have been locally available and read by a few of those employed by Air America.
And "Dan" himself might have been back on duty in Vientiane or Lon Tieng, IMO, before they even got their search fully up to speed.

bakergeol said:
It will eventually be solved as the FBI has DB Cooper's DNA.

Some think that he hit the water and quickly drowned if he wasn't already dead- hence the money floating downstream.

I agree with you, he is dead, but not buried.
You must log in or register to reply here.

GET A LOAD OF THIS (HITLERS GOLD)

The tense truce between detectorists and archaeologists...