Dredging above the Arctic Circle..

Hi,
I just aquired a 6” dredge for my operation above the European Arctic Circle. Looking to have it sucking a river in the summer of 2022 after some modifications and a lot of paperwork has been filled in.

Nice.
Are there still places in Europe where it's Possible?

Now there's a job that I could handle !!

Yes there are still places to dredge, UK is a definate no-go though.
John.
OP

2700 litres per minute with both pumps running but looking to change to a single Mercedes 190 diesel and a German fire pump.... 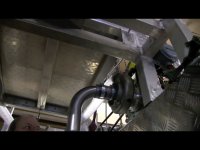 Aquatek said:
Yes there are still places to dredge, UK is a definate no-go though.
John.
Click to expand...

i'm more down south/central europe.
I switch locations,depending on the harassing levels i experience.
No motorized or mechanical means allowed,so i started Gravity dredging back in 2012.
Despite having obtained written Permit for my system,out of 8 holydays seasons i got called rangers 4times on me,sadly everytime by other "prospectors".
Sometimes Rangers see my permit and leave,sometimes they are not willing to accept and start looking for other ways to make work for me impossible.
Highlight was 2018.
River acces for motorized vehicles shut down,parking 1km from location and if if you leave the car there you will find it broken in to.
New rules ,no more free camping allowed,even sleeping in your car or camper outside of designated areas, which are miles away,which means leaving your gear for everyone to steal.
I had to leave after 2 days of consecutive bulliyng but..
I accepted the fight,checked for nearby farms,found a farmer on the opposite side of the river,asked for acces permission and to place my tend and got it.
Third day i a row they came to check me out,saw me on the other side on private ground and decided that in this case i had to take down my little riverrcobble dam ,which was the deathblow for my ops because the river i worked was flat and to increase suction i had to build a 40 cm (16 inch)high dam .
So for 2019 i started looking for a mountain river that would provide enough natural occuring droplevels to run a gravity sytem -and found it.
Even better ,there are nice nuggets there.
However 2020 again some very "correct" prospectors,again, called the rangers on me.
After looking at my permit they said that they would check.
Never heard again from them but another day was lost and the stress in those moments is a pain in the rear.
While i was not there,the "prospectors" also took pictures of my gear and posted it on theyre very correct facebook page of theyre very correct and enviromental friendly goldseekers club.
Just in case,i contacted a lawyer and let them know throug a friend because i don,t do facebook.
They took the pictures down,together with the whining,outcryes ,comments demanding burning me alive.
Another battle won but its getting tiring.
Also with the "European harmonization "of laws and regs ,Agenda 21pinciples,i think its a matter of time before they turn every last bit of freedom in to nostalgia.

Thats why i,m interested about your location countrywise and also paperworkwise,because maybe i will have to switch location in the future.

No problem if you feel need to keep it to you,and sorry if i kind of highjacked your thread.

Btw,here,s a vid of my 8 inch grav,dredge,which i don,t use currently because of the sudden death of my mining buddy and it,s a bit bulky for time restricted ,one man ops.
Dredge display starts at 1.17 min ,gold can be seen at the end of vid.

If you have vids of your dredge operating or pics of your set up/riffle system,would also be very interesting.

Interesting build Aquatec! Looks very well though out & put together! Cant wait to see pics of gold in the box!
Don't forget us

Aquatek said:
2700 litres per minute with both pumps running but looking to change to a single Mercedes 190 diesel and a German fire pump....

2700lpm is stretching it quite a bit, 3500lpm would be acceptable , moving up to the diesel is a great idea. If you haven't bought the dredge yet, take the pumps and motors out of the deal, it's just not enough

Aquatek said:
2700 litres per minute with both pumps running but looking to change to a single Mercedes 190 diesel and a German fire pump....

What's the brand name of that pump?
OP

Pumps are made in Sweden by a company called "Perfecta" however I have no contact details, it's just what I've been told.

The Mercedes transplant will go ahead on the dredge so the two pumps may go onto a smaller second dredge....

Having a big/small dredge can be a good combo, run your big dredge for overburden stripping and bring in a smaller dredge for cleaning up the bedrock, less flow better recovery of the fines.
R

I used my 2 inch Proline dredge to get my hole started for my 4 inch dredge. I normally don't have deeper water to start off with . I get my hole deep enough to keep my check valve from sucking sand then I bring in my 4 incher !
D

Chest waders or such for shallow water dredging?