I found this eagle button today. It is a 2 piece button with EXTRA QUALITY on back. I cannot find a matching one online. Thanks in advance for the help. 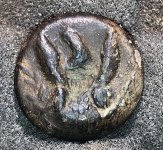 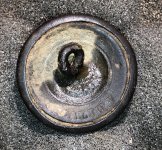 What a cool find! With the back post intact. Tell us the story behind the find.

Cheers and thanx for sharing.

Found in Massachusetts, about 6 inches down, using my hf elliptical coil on deus in a real iron trashy field.
Upvote 0

Old house , park, field? The history is equally as interesting to me as the find sometimes I wish the recoveries could talk to me.
Upvote 0
OP

Trashy field, littered with nails so most likely an old home site. No house on 1870 maps, found Kg in same field.
Upvote 0

Congratulations! Your hard work paid off? I’m sure you were excited when you first saw it after all the trash...
Upvote 0

Your find is a US Army uniform button manufactured between 1854 and 1874 for use by Enlisted-men's ranks (sergeant, corporal, private). The eagle had a different shape before 1854 and after 1874, which enables us to time-date your button to that specific 20-year period. However, instead of having the manufacturer's name as its backmark, it says simply SUPERIOR * QUALITY * in "serifed" lettering. That specific backmark is most often seen on civil war era eagle-buttons, when the US Army needed so many millions of them, the peacetime requirement for having the maker/dealer's name as the backmark seems to have been temporarily suspended.

If you are wondering how your civil war era US Army enlisted-man's uniform button came to be lost in Massachusetts, the answer is, every state's troops were issued their uniforms and underwent some "in the field" training IN THAT STATE before getting shipped of to combat locations in the Confederacy. For example, more than a few civil war Military relics have been dug at Mustering-In encampment sites in states like Iowa and Wisconsin, which never saw any civil war combat action. You might be digging at or near a Mustering-In encampment in Massachusetts.
Upvote 0
OP

Just saw this, late on thank you.
Upvote 0
You must log in or register to reply here.

Can somebody help date this button backmark please