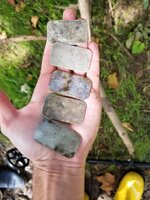 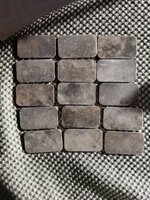 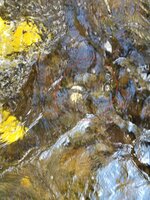 On the 20th I posted about detecting a waterway with mid 1800s homes along it. Bridge however is later 1800s I believe. It is not part of a state park, national park or protected historicly. It is public. Would describe it as sort of in middle of nowhere. Lots of 1970s clad, fishing lures, weights and bullets in general. On the 20th it was the usual and a wheaty. Then I found a troy ounce bar under water in the rocks of the rapids. I joked in that post about going back for the rest of them. Boy did I not expect there to be any more of them let alone eighteen. I thought the first find was just a fluke.
After the first bar was recovered on my 2nd trip there the area flooded. The water was too high and fast moving to get to. The area I wanted to be in was past well past knees and impossible to even swing the detector back unless you used both hands. Five days later after the water went down ten bars were recovered on one trip this week. Yesterday I went with my detecting friend and we recovered another seven bars. He found three. I found four. One was filed and tested with nitric acid. File spot turns white. I also tested them for paramagnetic behavior which they do exhibit. Also they melt ice pretty fast. My detecting friend and I are completely gobsmacked by this hoard. Unsure yet on purity.

As of this post 18 bars have been recovered. we cannot locate any more in area where 17 of the bars came from. And there are no more in the rapids for now..... at least until it floods again. Were they tossed off the bridge and then slowly burieded and the unburied by the floods? That's seems most likely at this point. After the flood they were only 2 to 3 arrows deep on the equinox. All jumping between 33 to 38 target idea. Very loud signals. They seemed to settle in the lower divits in the rocky bottom often with big iron. Two were stuck together with water. Three were visable by eye site. Two shown in photo with red circle. They all definitely have patina and pits from nocking around in the rocks and gravel for a long time. No markings left that I can tell. My guess is 20th century because they are so uniform and they are pressed bars? Anyone have any idea? My detecting friends mother an ultrasound tech believes she found some writing on one of the three my detecting friend found. Waiting on update and photo. Would be great to date these roughly.
Any updates will follow. Now where are the gold ones? Lol. Group picture only shows the 15 I've recovered myself. Three of the 18 my detecting friend found. He helped me with a bottle site and a park I found my first one reale and first large cent so figured I'd share. We definitely are going back after heavy rain. Really ought to buy waiters because the water is on the colder side and I keep flooding my boots.
Last edited: Oct 7, 2021
Upvote 65
OP
R

yaxthri said:
Wow what a find! Congratulations and go back for more!!!
Click to expand...

It was completely flooded Sunday so was a no go. Could hear the water raging when I pulled up. Bar zone water would have been at my waist and barely 60 degrees. So when it goes down and I get rid of this dang kidney stone I'll get back there. Still will be chilly but usually it's just below your knees.
L

Did you ever find out if they were pure silver and how much there're worth??
OP
R

Ladybuggz said:
Did you ever find out if they were pure silver and how much there're worth??
Click to expand...

Worth about $23 a bar. Test pretty close to 99% silver.
You must log in or register to reply here.

found this but not sure what it is.