This is the Rock Cut. One of the best hidden secrets of the Upper Peninsula. Most have never even heard of it, let alone visited it. Even with directions from a local, it took us 2 days of attempts to locate it. When we parked at the right spot, it took us 2 hours to find the entrance, which was only about 100 yards from my Jeep. My friend Zach is pictured walking through it, to give a sense of scale.

Deep within the Huron Mountains, this is one of the few remnants of the Iron Range and Huron Bay Railroad, which cost millions of dollars to build (In the 1800's!), but was never used to transport a single pound of cargo before the mines in the area started to dry up, and the investors of the railroad ran out of money. The railroad company quickly went way over budget, since building a railroad through a mountain range isn't exactly easy or cost effective. This railroad had twice the recommended max vertical grade of railroads at the time. The Rock Cut was one of the most expensive parts of the railroad, as they needed literally tons of explosives to blast through the incredibly hard granite rock in the area.

Once the railroad was deemed a failure, it was disassembled, and the materials were sold off to recoup some of the costs. Afterwards, the chief engineer of the railroad fled to Mexico to escape fraud allegations, and was never heard from again. 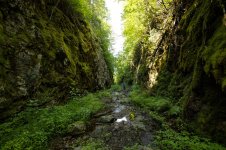 Nice photo and story, Walleyeman. Thanks.

I've come across a lot of RR cuts, but nothing that massive. Here in Penna, they had Italians digging cuts with picks, mattocks, and shovels.

Do you have morr

Mchigan
You must log in or register to reply here.

that was a Cool Sweepstakes !