Haven't been on in a while but figured this was worthy of a post! Got off work with the intention of digging some bottles but that didn't work out so I went to plan B. Went by a site I've found some decent relics and coins at. Wasn't going to detect this spot again and almost wrote it off but they had scraped a lil more dirt so decided to go ahead and beep a lil and see what comes up. Well not even 10 minutes in and my Deus rang a sweet sound. Dug about 1 inch and out popped this square piece of metal and didn't think much of it until I rubbed a lil dirt off and saw a bit of "Charleston" and "Servant" and "1818" at this point I was just in shock, which quickly turned to "OMG" I can't believe what I just found!!!!! An 1818 Charleston Servant Slave Tag. Life doesn't get much better 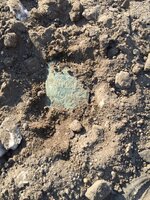 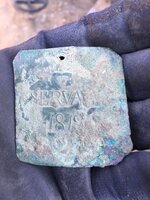 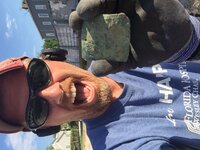 oh and congrats on Banner
S

HECK I WOULD HAVE BRUSIES ALL OVER ME FROM DOING CARTWHEELS FROM A FIND LIKE THAT .CONGRATS AND ITS A BEAUTY .

congrats on the find of a lifetime!

it don,t get any better than that tag, congrats from s.c

Great find! That's on my wish list, but where I live I'm more likely to see E.T..

Wow what a conversation piece .. And a stellar find to boot !!! Congratulations !

Fantastic find! Hope there is more there!

Whoa! Good thing you stopped for a closer look at that. Sweet find!

Awesome find! Glad to see the thread come back to unreal find. A couple posts on the last page were pretty pathetic.

Not a big fan of those artifacts , but...

villagenut said:
I suppose it would have pleased some of you better if it had been worded "the age of the Americas" but truth is slavery has been a terrible ingredient of man since the beginning as least as far back as the Jews enslavement to Egypt, the Spanish explorers towards the Natives here in America and yes the list could go on and on and does exist even today in many forms. Without pointing fingers at Egyptians,Spaniards,Plantation owners or even the "black man"you mention, it is a sad idea that ANY person at all has had to be owned by another human whether you were one who was hired out wearing a tag for Identification or whether you are a child working in a sweat shop for pennies. The problem with this whole idea of who started it all, really amounts to skating around the issue,thinking that it was not a travesty at all but just a finger pointing session that ignores responsibility whether you are white,black or whatever color your skin is.I am sure that all of our ancestors at one time may have had the ideology that slavery was just a fact of life and acceptable. I would hope that for most of us, we can begin to see the need to not tolerate such views...and I am not a black guy and you probably are not either...thus your viewpoint.
Click to expand...

First off congrats what a historic find. I wish this above quote can be voted for best written post of the year.
A

Love this piece of history. I understand you're excitement, this is a truly significant find. For me, a great grandson of a Dachau victim, slave tags are no different than Nazi concentration camp Tatoos. Important, but sobering. Not sure if smiles should be so easy, or appropriate.
You must log in or register to reply here.