Hey guys! Well As you may have known, by now I have been perfecting my skills with the SE. I have become great friends with the machine and knowing all of it's beeps and blips that the machine makes. I am happy to say that today was another great day! I had planned to go metal detecting at a 1920's house with Nate(JuJu) at 9am in the morning. He told me that I could arrive a little early, so we could make it over there and still have enough time to hunt before dark.

Nate, His wife, and I packed up their car and headed out! It was around 10am when we got there and Nate and I were really excited to start hunting! Nate and I agreed to start at the right side of the house which turned out to be great!

I know it sounds crazy but my first ever hit was a 1958 wheatie! Nate was amazed none the less about me getting a wheatie on the first hit. After getting regular pennies for awhile I got another wheatie hit. By this time Nate had also gotten a wheatie and a game token (He will post his finds).

We circled this part of the area for awhile and I had found nothing but clad and one more wheatie. That put me up to three wheat pennies. Nate had two by this time. At the very edge of the lawn Nate got a very old button. We have no idea what it is but he is hoping to get some answers.

Nate then went to the left side of the house and started hunting there. I had already skimmed the surface and got a lot of the clad. I changed my variable (I think thats what you call it) settings on my detector from 8 to 10, thinking that it would help a little bit. Well it sure did!

I heard a little beep, as I passed over the ground. I decided to dig the hole and get whatever coin that was underneath the ground.

To my surprise listening to that little dime beep helped!

I saw a glimpse of the dime on edge and it shined like SILVER! I was amazed when I pulled out the dime and revealed the date to be 1952!!!

I was so happy!

I rushed to Nate, like I was a little kid, who had just won a full day of shopping at toys R us! Hehe!

He congratulated me and then we went back to hunting! I filled my hole and went to the left side of the lawn, where he was.

10 minutes had past since the silver dime had been found. I had been pulling up tons and tons of trash, and some regular clad. I got an iffy foil hit on my SE. I thought it would be a nickle but it wasn't. I lifted the plug out from the ground and saw what looks like another silver looking color. This time It was not silver. BUT! I did get a THIMBLE!

My first ever thimble! I had wanted this one for a long time! Another item that I have checked off my list!

It was getting dark, so we decided to go home. All of us thanked the owner for letting us hunt her yard and she said that we could come back anytime we wanted

Oh and for anyone who wants to know the wheaties range from 1954-1958, nothing special and I have four of them. 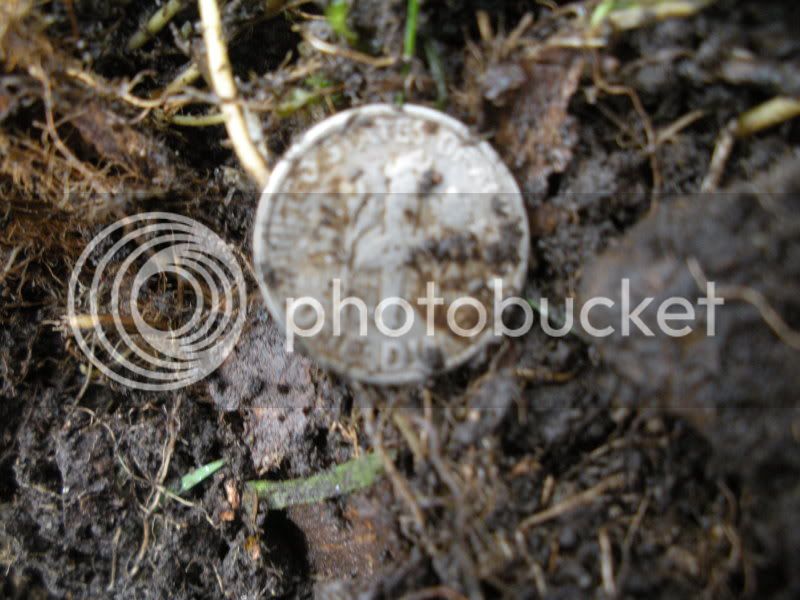 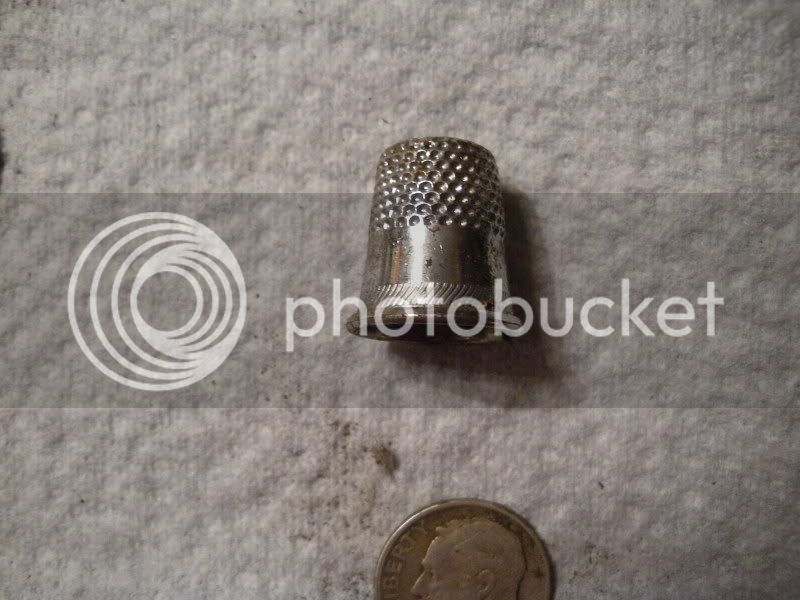 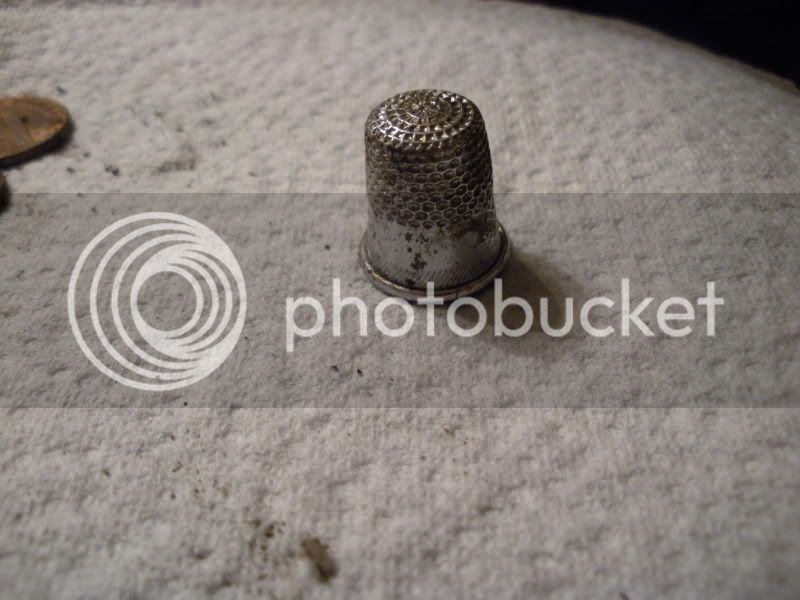 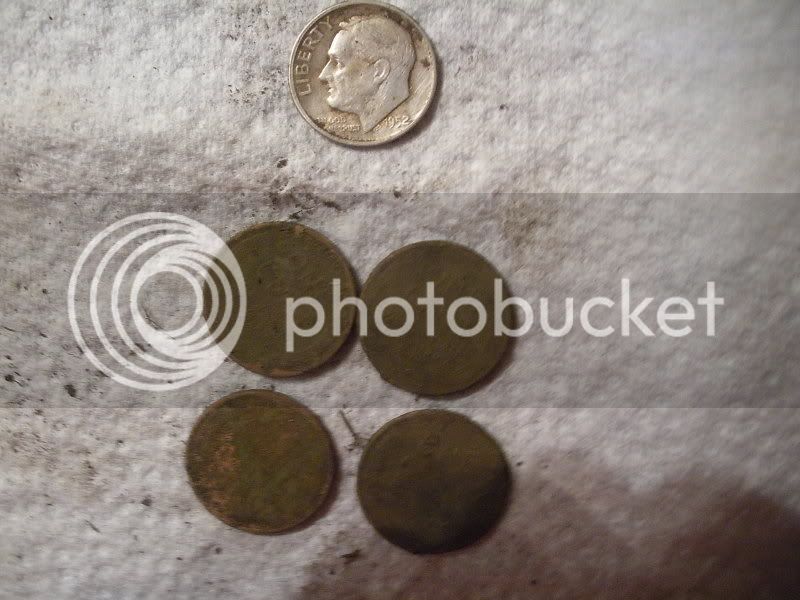 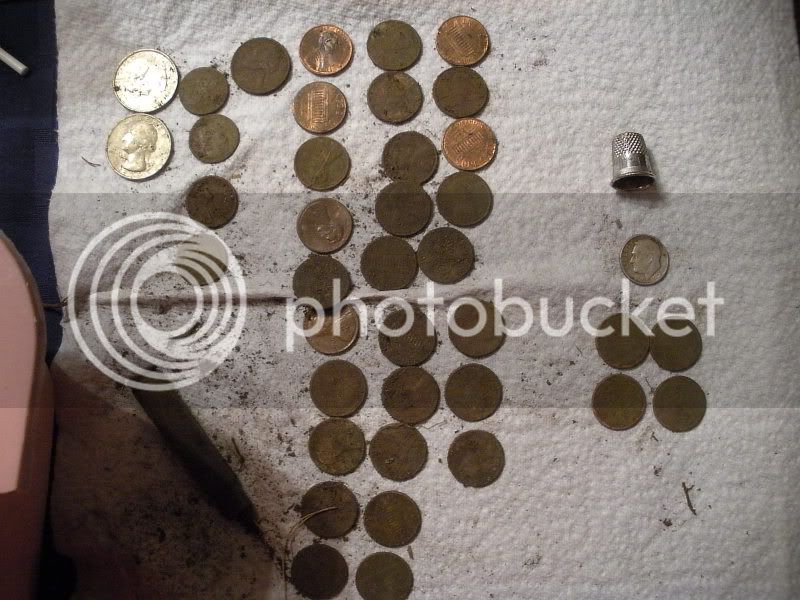 Tommorow, Nate and I are heading out to the 1928 farm to do some more detecting!

I hope everoyne got out and detected on this sunday!

Nice finds - that silver in the mud is a sight to see! What is that green grass

Don't know what that's like here- considering we are covered in snow!

Nice finds, so it the thimble not silver it looks really good. HH
JDD

Nice going, DF! Glad you were able to score on your hunt today.

I can tell you're getting better with your SE.

Your Variability setting on your SE controls how much "variation", in tone, targets of different conductivities will sound. The higher the setting the more different a low conductor (pulltab, foil, nickels, etc.) will sound from a higher conductor(copper, silver, etc.).

Re: First Thimble!!!!, Plus 2nd silver rosie, and 4 wheaties! Had an awesome day

Great hunt!
Sounds like you're getting the hang of that machine.
Keep at it!
Mike

WTG I had a great day also. Big congrats on your silver dime. I am lookin forward to tommorrow.

I always enjoy reading about you and Nate's hunts...I like to see what the "local" guys are digging up! Good stuff!

Congrats on that silver.

Cool thimble too. I haven't found one of those in some time now.
-MM-

Love finding the thimbles, makes ya wonder who used it & how they came to lose it!

congratulations!! I can't wait to find my first thimble.

You are just kicking on those finds there DF. Great job and hope to see more finds before the weather turns to crud. WTG...

Those thembles are nice to find. Its really in good shape. I found a couple at my site that are very old, and in that good a condition, but it was a thrill to find them.

You are getting to be an old pro when finding a wheatie is nothing special.

LIKE THE THINBLE. SILVER AND WHEATES. THAT WAS A AWSOME DAY.

Nice huntin' D.F. I jacked up my variability to 10 and just left it there from day one. When I run accross deep silver...the sound just stops me in my tracks.

Nice job DF. Good luck on your next hunt. HH and Happy holidays. Looks like you are about to get a taste of winter out there
You must log in or register to reply here.

A couple of leads from the old briar patches.