First time out with the Equinox 800 and my heart almost stopped!!!

I’ve been detecting for about a year and a half. I cut my teeth on a whites DFX, a great machine that has provided me with many many hours of fun. But after seeing everyone post awesome finds with their Equinoxs’, I decided to bite the bullet and get one myself. I downloaded the newest update as soon as it arrived last Thursday. I recently scored a new permission at site in my hometown in northeast Georgia. My mom and I hit it early Saturday morning (she too has an equinox 800). The land owner came out and showed us a pristine 1899 barber dime he had found in the front yard and told us that his friend had found an 1827 large cent in the same area. That got us really pumped! Things started out slow, only two wheat cents in the first hour. I was running park 2, iron descrimination, recovery speed settings of FE zero and F2. My mom was next to strike with her first ever silver coin, a 1949 Roosevelt dime, we were so excited! 15mins later, I had a slamming 34 signal 8 inches down just off the driveway. Of course the signal was directly underneath a three inch wide root. I nearly gave up on it (I suspected it was just a beer can or a large piece of iron). Thank goodness I didn’t!!! I couldn’t believe what I was looking at once it came out of the hole!!! I never put a Morgan silver dollar on my bucket list, as I never thought I would be digging in a place what would be hiding one! That just goes to show you never know what’s there until you dig! At the end of the day, I ended up with a handful of clad coins, 5 wheat pennies, a slicked 188? Indian head penny (my oldest coin), a 1936 quarter, and the 1889 Morgan silver dollar. I had no idea Morgans were so big! Keep digging and happy hunting!!! 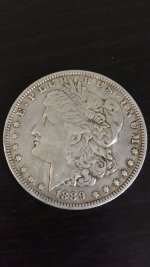 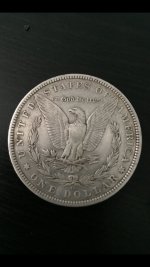 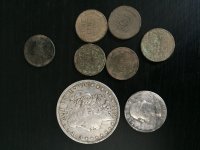 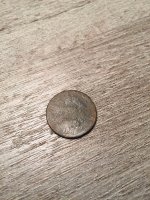 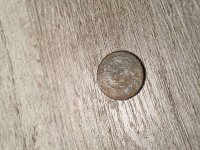 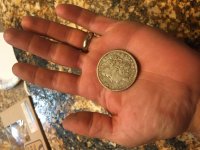 Congrats on finding such a big and glorious coin. Still looking for my first Morgan dollar. Hope you find more great coins and some relics. The Equinox is great for it.

Congrats! On the giant hands, as well as the tiny morgan dollar.

Congrats on the fine hunt and large silver!

I do not think your DFX would have missed that huge coin!

What a beauty congratulations and I know how wonderful it feels for you to have that big piece of silver in your hand that’s been laying on that route for so long and you’re the one that found it and now you own it, it’s all yours. I know what a great feeling that is congratulations you deserve it you fought that root and won great job [emoji1360]
X

Outstanding! It’s so cool that your Mom is into detecting.
T

Goodnight what a great start with your new machine.Welcome to the silver dollar club.

Congrats on a great coin.

Detector(s) used
Garrett AT Gold / AT Pro / Pro-Pointer AT

Huge congrats on your huge silver!! My one and only Morgan is an 1889 also, so yes.. I know the feeling! Sounds like Mom had a good day too... nice coins, you certainly saved some history! And that Morgan is a stunner, btw. Thx for sharing, Ddf.

Congrats and welcome to the silver dollar club. I dug an 1896 way back, and you’re right- they’re bigger than you expect! Glorious!

Congrats on the silver dollar and the quarter.
1 1/2 yrs and you can check it off the bucket list.

Being trying for 50 more than that-and I can't shack that monkey off the back it seems.

You broke into a whole new realm most of us will not see lol...congrats on the Morgan. I used a DFX for years and just got a White V3i, now use it almost extensively. Have thought about getting an Equinox 800 but feel the Whites are as good in the right hands. In your opinion is the Equinox better machine than the DFX ? Let me know and good finds !

Professor of Engineering said:
I do not think your DFX would have missed that huge coin!

I think you are probably right!
You must log in or register to reply here.

I got two in one shot

2 hours at Jones Beach this morning