Today, Pomona Park is the site of the annual Fruitport Old Fashioned Days in May. A carnival sets up in the park and bands perform in the band shell. South of the band shell is a pay boat launch facility which is busy during the summer months. Beyond the boat launch the park boundaries next to Coops Party Store and beyond lies Norris Creek. The small Fruitport Library is on the Northeast corner of the park, Bands perform in the library basement occasionally for teens. Directly west of the library is a fenced in play ground for children.

Across the street from the park is “downtown" Fruitport consisting of a pharmacy, tavern, bank and video store. Fruitport recently had a severe wind storm which damaged some of the trees in the park and the roof for the picnic table shelter in the center of the park. The east side of the park once had a Greyhound bus stop that quit running 40 years ago. 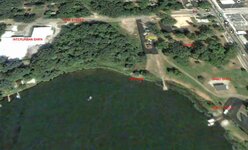 New location for me cool thanks
You must log in or register to reply here.