So my family is going on a trip soon to Cozumel, Mexico, and I’m wondering if anyone knows of any treasure stories there. I plan on metal detecting the beach a lot. I did see that articles say that Jean Lafitte and Henry Morgan came to the island, but I have also seen articles that prove that the claim is false.
D

Yeah, I got a treasure story a fishing story, and a boat story all rolled into one-

Back in the nineties I went to Cozumel with my brothers. We wanted to try out trolling for billfish, Mahi mahi(which they call "Dorado", and wahoo. Well the way it worked is the island of Cozumel has two marinas. One is north of the downtown pier, and one far south of the downtown pier. The one at the north end is where you go if you booked a trip with a travel agent American Charter captain operating in Mexico. But if you speak the Espanol, take a taxi to the south marina. Tell the cab driver you are looking for a fishing trip. They will hook you up on an old tub of a boat for 1/4 the cost of a foreign boat operating out of the north marina. When we were looking for a captain and boat we only had two requirements- Penn International fishing reels, and a working marine radio. Two engine boats are preferable, but the slower the boat the less fuel it will burn and the lower the cost.

My brothers and I booked with Captain Antonio and his mate Raul. Captain Tony's boat was a converted motor sailor with a single 70hp diesel, outriggers, and a fighting chair in the cockpit. I can't recall the name of the boat but it was Spanish for "The walker". In three days fishing we caught a blue marlin, a few sailfish, and a few white marlin, two wahoo, and the dorado were a downright nuisance. Including a very generous tip the cost was equal to only one day fishing on an American boat operating out of the north marina. The captain releases all the billfish, they are his bread and butter, and he keeps all the dorado to feed the locals. But, the boat will give you a portion of the catch so you can get it cooked in a local resturaunt. Only take twice as much as you need for dinner, the restaurant might keep some for their menu.

I caught a blue marlin, a white Marlin and a sailfish, a.k.a. a Grand Slam, along with enough dorado to wear us all out. It was a blast! And I will always treasure those three days fishing with my brothers off of the Yucatan Peninsula. Not sure how it is now, this was thirty years ago.
OP

That sounds like a great time! I think me and my family might also go fishing, so I’ll have to look into that!
D

Most of the Island is a marine wildlife sanctuary. Do NOT fish from shore even if you see locals fishing someplace. The Mexican Federales will seize you bodily and it will take a substantial bribe to get out of the possible prison sentence. You don't want to be eating chicken necks and fighting for your life in a Mexican jail. Don't even bring a fishing rod, the boat should provide them.

Second, DO Not purchase any black coral or sea turtle shell objects. They are prohibited from possession in the U.S. by the Lacey Act which is federal law. Violation of this law can result in fines in the tens of thousands of dollar.

Third, there is a risk of intestinal dysintary. Do not drink the tap water, beware of ice cubes, and do not eat any uncooked fruit or vegetables. If you want raw fruit, whole unsliced and unpeeled fruit from the market is okay, so long as it is washed in bottled water with a bit of soap before consumptuion. Take a dose of pepto-bismol tablets before every meal it will protect you somewhat but make your crap black.

Instestinal Dysintary- try to get a prescription from your doctor for two tablets of Lotimil. Lotimil is basically The Ultimate Cork and for emergency use only. It will stop the crapping only, it is not a cure for dysintary. You just got to crap that dysintary out if you catch it and let it run it's course. Stop with the pepto-bismol if you catch the dysintary. But the Lotimil will allow you to travel and bug the heck out of town back to the States.

Look for a domestic beer called Supe'rior (it makes Corana or Dos Equis look like worthless junk), and a domestic soda pop called Crystal. Coke brand cola down there is made with cane sugar instead of high fruitcose corn syrup and far better than the cola at home. Order a Ron y Coka sans ice cubs. Limit yourself to two alcoholic drinks a day, there are currently problems in Mexico with counterfeit booze and you don't know for sure what you are getting.

And that's all I know about that.

I went to Cozumel in 1995 on my honeymoon. That was before the cruise ships showed up and it was a glorious place back then. Have been back several times since and it loses more and more of it's charm each time. That said, it's still a great vacation spot. Have fun.

Good Day TreasureHuntingPug and Welcome To The Show!


TreasureHuntingPug said:
So my family is going on a trip soon to Cozumel, Mexico, and I’m wondering if anyone knows of any treasure stories there. I plan on metal detecting the beach a lot. I did see that articles say that Jean Lafitte and Henry Morgan came to the island, but I have also seen articles that prove that the claim is false.
Click to expand...

The Oceans around the Yucatan Peninsula are loaded with Treasure Stories... as are the Mayan Cenotes located in the interior.

Having lived on and off for 20 years in this area... I can advise some interesting locations having many stories told of Pirates.

Isla Mujeres a quaint little island up from Cozumel was home to the Pirate Mundaca…who used it for his home base to exchange African Slaves onto the Caribbean and Americas...prior to being buried there...he had to have done something with all the gold he accumulated? 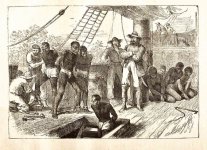 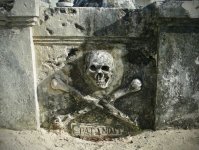 Rio Lagartos - an out of the way fishing town frequented by Pirates such as Jean Laffite as they raided the walled Spanish town of Campeche along the Yucatan Gulf...see my writeup under thread...Beyond Oak Island! 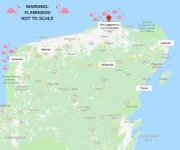 If wild fishing is what you are after... find a local fishing boat usually by the restaurant and offer $50.00 for the day along with cases of cold beer to take you up the river...you won't be disappointed... offer that he and the local restaurant can have all the fish caught... for the price of a free meal cooked of the chosen catch of the day.

PS. be careful of what may also be fishing there! 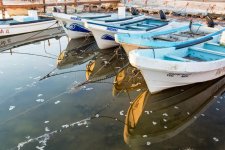 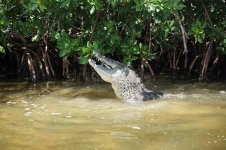 Cenotes - many undocumented ancient wells located near here...used by the Maya for sacrificial offerings made of gold... good for underwater detecting. 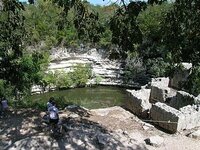 Mexico is a land of Treasure where many lasting Dreams can be found!
Last edited: Feb 23, 2021

Stay away from here if you want to get ANYTHING done

Back in the day, when the lighthouse at the southern tip had a lightkeeper. I had a great experience with that man and his family.
In exchange for providing him with a case of beer and some other adult beverages, his wife would cook us an 'all you can eat' lobster dinner, fresh from the sea. He had only one light bulb hanging across his living room with hammocks strung all about. Very memorable.

The treasure story if from a friend who also visited that family, got on their 'good side' and he was shown a water cistern filled with Spanish coins. Since the keeper had neither a car nor boat, we figured he just walked the shore for years picking up the coins. No, I never saw them, but if I ever get back to that area, I'll walk that same beach with my MD and see what happens.

RTR said:
Stay away from here if you want to get ANYTHING done

I don't know that it's still there, but Carlos and Charlie's was on the second floor with a concrete volley ball deck in the back. When you enter and go up the stairs turn around and look behind you. There was a sign on the bottom of the stairs that you are not supposed to be aware of when you enter.

It lists all the injuries to date, and most of them did not happen on the volley ball court. But don't worry. They aren't any rougher than any corner bar in the Midwest. Not at daytime.

If You Are Ever At... Carlos And Charlies?


Duckshot said:
I don't know that it's still there, but Carlos and Charlie's was on the second floor with a concrete volley ball deck in the back. When you enter and go up the stairs turn around and look behind you. There was a sign on the bottom of the stairs that you are not supposed to be aware of when you enter.

It lists all the injuries to date, and most of them did not happen on the volley ball court. But don't worry. They aren't any rougher than any corner bar in the Midwest. Not at daytime.

Whether at Cancun or Cozumel...mention my name...For my long loved friend..."Tarzan"... who runs the establishment.. He will know me as the nick name...Roberto...Roberto!... and his nick name as Jose... Jose!

And no Treasures can compare to this!
Last edited: Feb 25, 2021
You must log in or register to reply here.

Where to sell my gold?