Gold Discovery near the confluence of the Colorado and Virgin Rivers

Thomas L. “Pegleg” Smith is associated with two lost gold deposits. One occurred near the confluence of the Virgin River with the Colorado River during the 1826-27 trapping season. The second gold discovery was allegedly somewhere in the Southern California desert during the 1828-29 trapping season. The reason I say allegedly is because researchers have difficulties verifying that Thomas L. Smith entered California via a Yuma to Los Angeles route in 1829. That is the reason why there are so many alternative theories about the time and place of the gold discovery. To add to the confusion, there are stories that two other men known as “Pegleg Smith” finding gold in the Imperial Valley area.

The gold discovery during the 1826-27 trapping season

For a better perspective of the 826-1827 trapping season, the following three documents can be downloaded from the internet. Search for:

Hutchings’ California Magazine (HCM) seems to have the only biography on Pegleg Smith’s life (that I can find online) printed before he died in 1866. Unfortunately, the story of his life only continues to March 1828 at the time he was healing from the amputation of his leg. 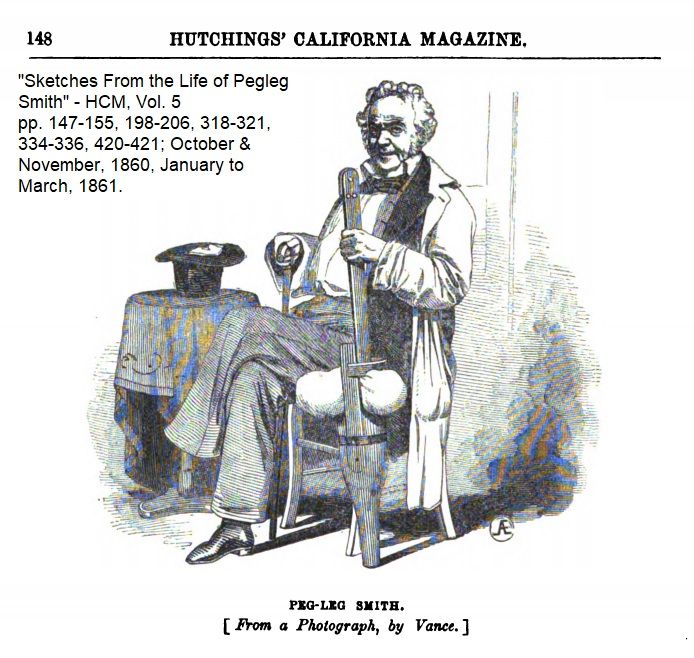 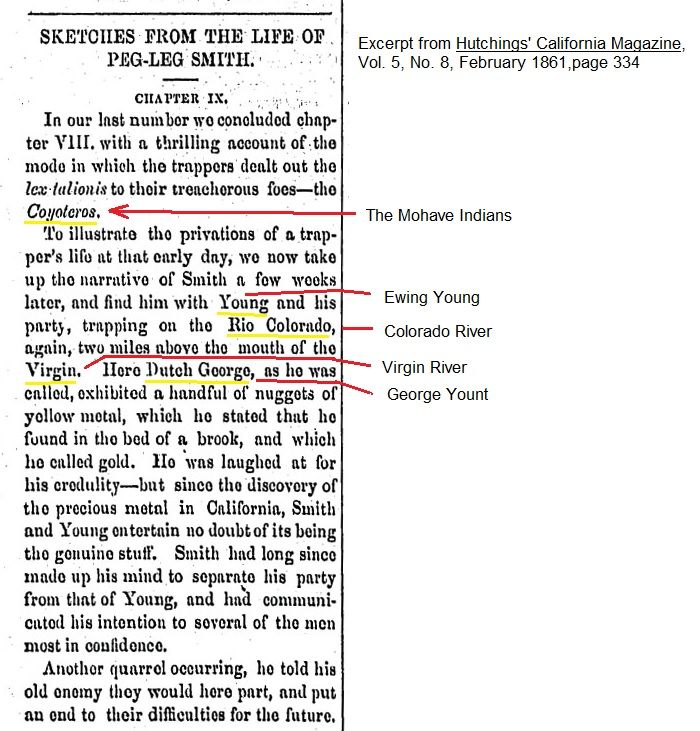 This is an excerpt of Sketches from the life of Peg-leg Smith (Chapter IX, page 334

According to the HCM article, Thomas Smith and Ewing Young did not get along and “Another quarrel occurring, he (Smith) told his old enemy they would here part, and put an end to their difficulties for the future.” Thomas Smith and his original party (Stone, Alexander Branch and two New Mexicans) split from Ewing Young’s party. Building a raft, they crossed the Colorado, while the remainder of the party returned to Santa Fe.” According to Sardis W. Templeton, George Yount temporarily joined the Smith party for a few days before returning to the Ewing Young party.

The Lame Captain (Pages 58-59), contains this statement: “Finally around the great bend of the Colorado, and free of the Mojave savages, one of the men of the company came upon a deposit of metal he believed to be gold. It was found in a ‘dry canyon leading down into the Virgin, two miles above its mouth.’ Smith called the nuggets copper. Whatever they were, the finder, whom Smith calls Dutch George, had a pocketful, and asserted he could have loaded a mule, had he had one along. Given a day to return to the deposit he couldn’t locate it again, and Smith cursed him for being a stupid Dutchman. This was a mild exchange for a trapper camp, and Dutch George – George Yount, or Jundt, as the name should be spelled, one of the best known of the earliest American settlers in California – remained a lifelong friend of Smith, and convinced to the end of his days that wealth immeasurably lay along the banks of the Colorado and the Virgin. Twenty-seven years later Smith led a prospecting party numbering eighty men to the Virgin, in an effort to find this deposit, known then to California miners as he Dutch George placers.”

Sardis W. Templeton seems to have acquired the additional information from an article “The Story of an Old Trapper: Life and Adventures of the Late Peg-Leg Smith,” published in the San Francisco Bulletin (October 26, 1866).


This would place the “Dutch George Placers” along the Virgin River. A check of Mindat.org (website showing the location and geology of mineral deposits) shows that the only mines or prospects along the Virgin River in that area are almost totally non-precious minerals, primarily salt mines.


In Golden Mirages, Philip A. Bailey, combined the gold discovery by George Yount during the 1826-27 trapping season with the 1829 gold discovery in Southern California. Mr. Bailey gives the date of George Yount’s gold discovery at the confluence of the Colorado and Virgin Rivers as the spring of 1828. On page 29 is a statement that Ewing Young, Pegleg Smith, George Yount, and other trappers were “camped on the north bank of the Colorado, a few miles east of its junction with the Rio Virgin.” In the Story, Yount claims he found gold nuggets “’Bout two miles this side o’ where the Virgin runs in. ‘Twas in the bottom of a dry creek.”


From The San Diego Union, May 15, 1891, there is a story that W. C. McDougall claims he heard from Pegleg Smith in 1852: “On one hunting excursion a Dutchman of the company came into camp one night and displayed quite a lot of shining yellow metal. He said he found it on level ground in a valley, and not near any mountains.”
OP
A

What did George Yount say about his gold discovery? We don’t know because his memoirs do not describe this particular gold discovery. The reminiscences of George C. Yount was narrated to Dr. Orange Clark around 1854-55. Unfortunately, there are many pages missing (the pages were not numbered) from his memoirs and this critical piece of narration, if it did exist, is not available. You can read parts of his memoirs in: 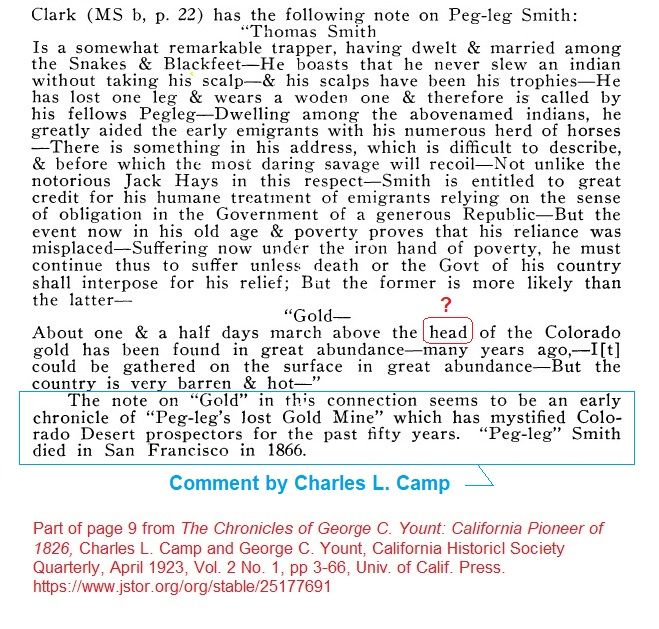 The note on “Gold” (in the blue box) is conjecture by Charles L. Camp. Another writer speculates that the statement “About one & and half days march above the head of the Colorado” is an error and actually should have been written the “bend” of the Colorado. Note that the Colorado River generally flows north upstream from Yuma, Arizona until it reaches the vicinity of Hoover Dam and then changes direction (i.e., bends) to the east. By changing the word, the writer than could place the gold location in the vicinity of the Dutch George placers.

The manuscript also contains this reminiscence by George Yount when he was the leader of a 1827-28 trapping party traveling down the Gila River and up the Colorado River: 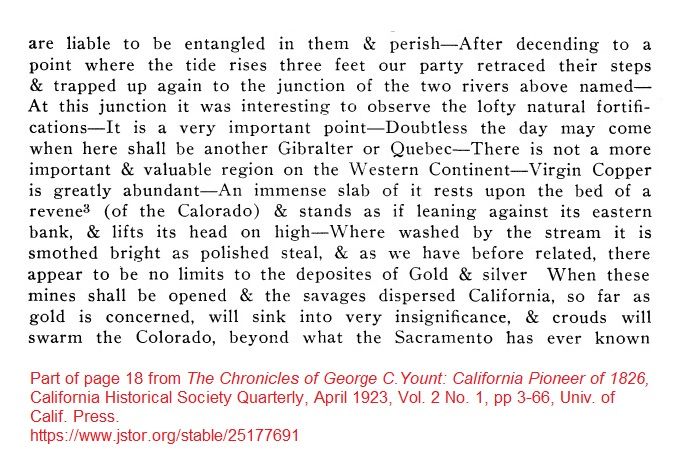 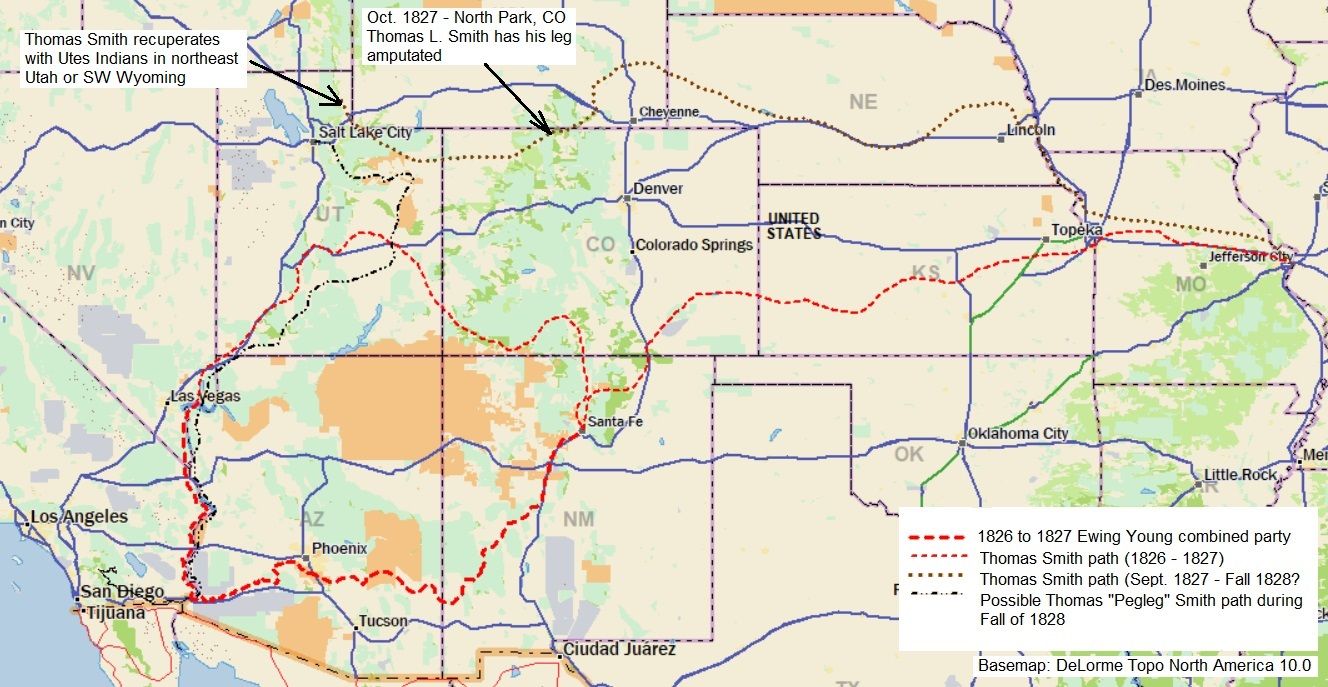 I put together a map showing the general path of Thomas L. Smith during the 1826 to 1829 trapping seasons. The routes I depicted are guesstimates.

Heavy red line: Pegleg Smith, Stone, Branch, and two New Mexicans started from Santa Fe, New Mexico to trap down the Gila River and up the Colorado River. The party was attacked by Indians and retreated back to Santa Fe. The party joined the Ewing Young and Pattie parties and set out again. The combined parties continued up the Colorado River to the confluence with the Virgin River. At this point, the Thomas Smith party separated from the Ewing Young party. Thomas Smith trapped up the Virgin River and the party made their way eastward and then south back to Santa Fe, New Mexico. Thomas Smith had to smuggle his furs out of New Mexico and transported them to Missouri.

Thomas Smith traveled up the Platte River to trap in Colorado. He was shot in north-central Colorado and had to amputate his leg. He was transported to the Green River in southwestern Wyoming or northeast Utah to a Ute Indian cap to recover. Thomas “Pegleg” Smith may have attended the June 1828 Mountain Men/Trapper Rendezvous at Bear River. Jedidiah Smith was at the Rendezvous and Pegleg Smith may have heard stories about Jedidiah’s travel in California.

Unverified reports that Pegleg joined a great basin trapping party. I speculate that the party trapped in Utah and eventually down the Virgin River to the Colorado River. Since he was again at the confluence of the Virgin and Colorado Rivers, Pegleg may have commingled events from both expeditions (i.e., the gold discovery of George Yount occurring during the same trapping expedition as the trip to California). I have read only one account that says Maurice LeDuc was part of the 1826-27 expedition. If Maurice LeDuc was in the 1828-29 trapping expedition, it is possible that Smith and LeDuc separated from the other members of the 1828-29 party and continued down the Colorado River and on to California. It would be beneficial if someone could find a memoir of Maurice LeDuc life on file somewhere.
OP
A 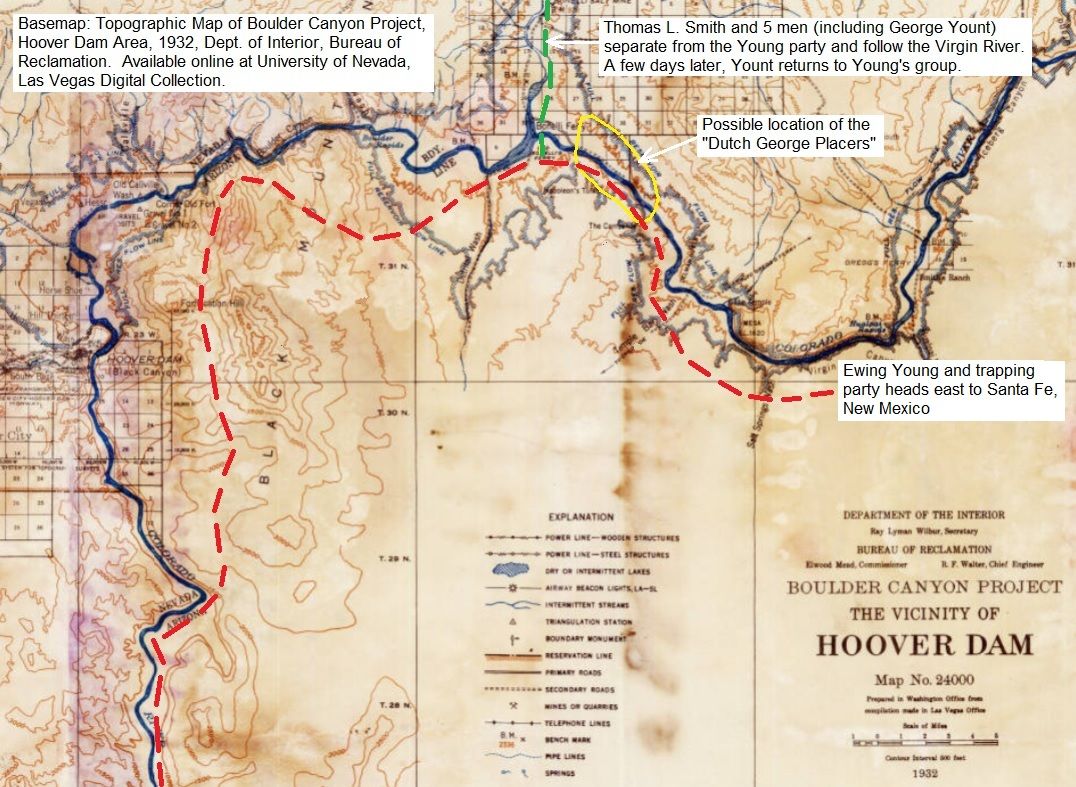 Back to the 1826-27 trapping expedition. The red dash line indicates the expedition traveling north to the confluence of the Virgin and Colorado Rivers. The yellow line potentially encloses the area that George Yount claimed to have found the placer gold deposit. The green dash line indicates Thomas Smith’s party separation from Ewing Young’s party. The Ewing Young party travelled east and eventually made their way back to Santa Fe, New Mexico.
OP
A 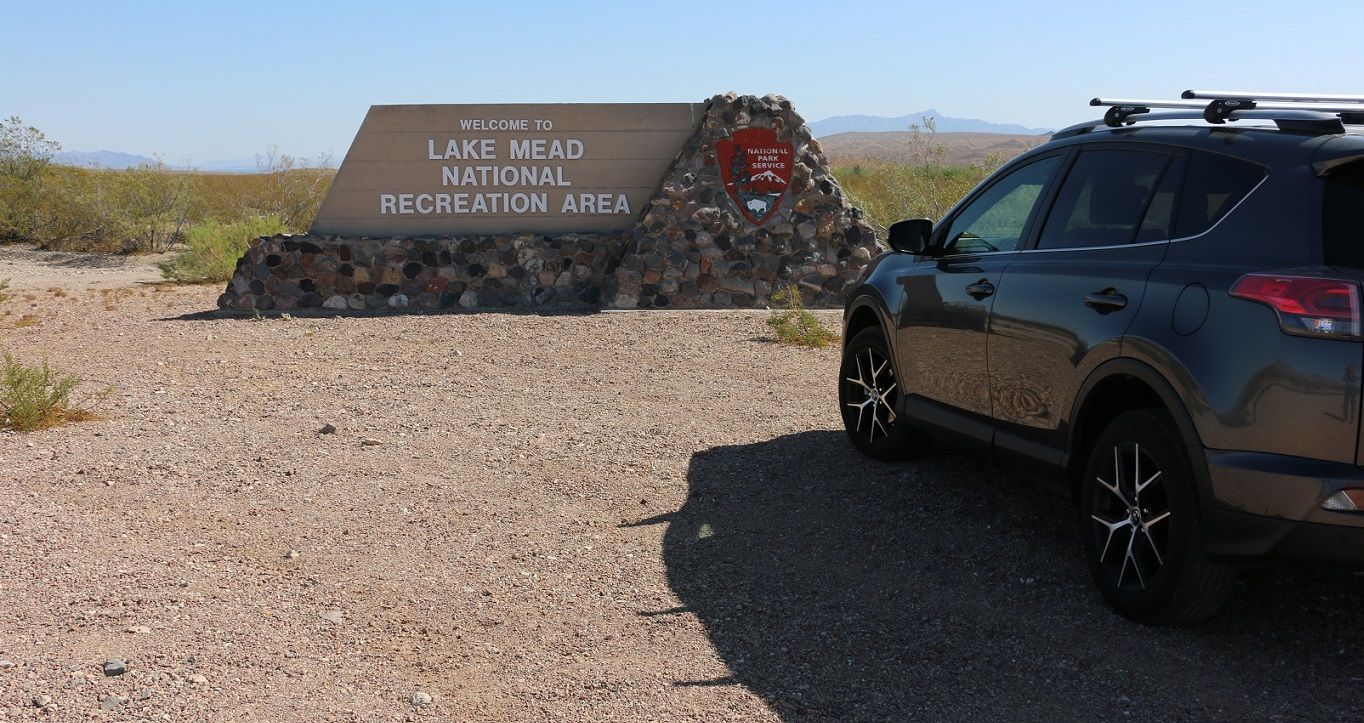 The estimated location of the Dutch George placers is now underwater within the Lake Mead National Recreational Area. I drove to the general area see the type of topography those trappers traversed. The closest I could drive to the confluence of the Virgin and Colorado Rivers (without 4-wheel drive) is Temple Bar Marina. 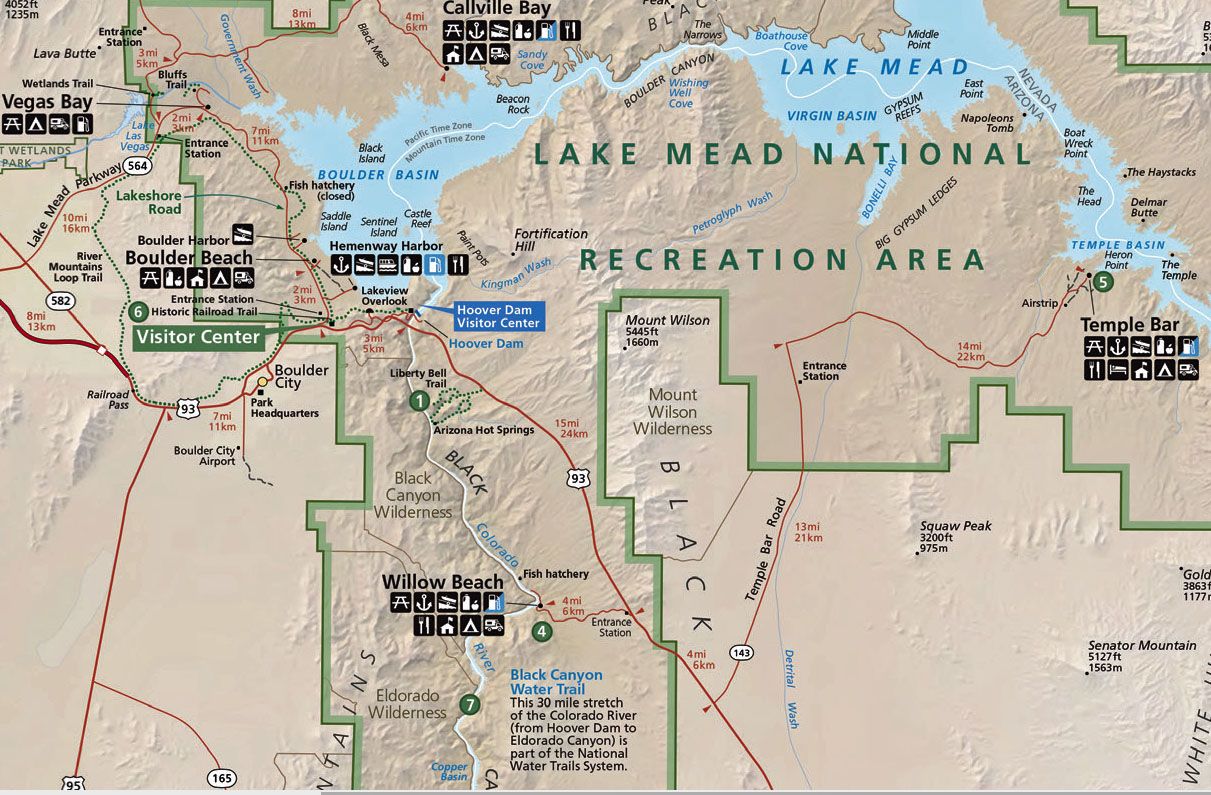 Part of the National Park Service map. Temple Bar Marina is located in the upper right side of the map. 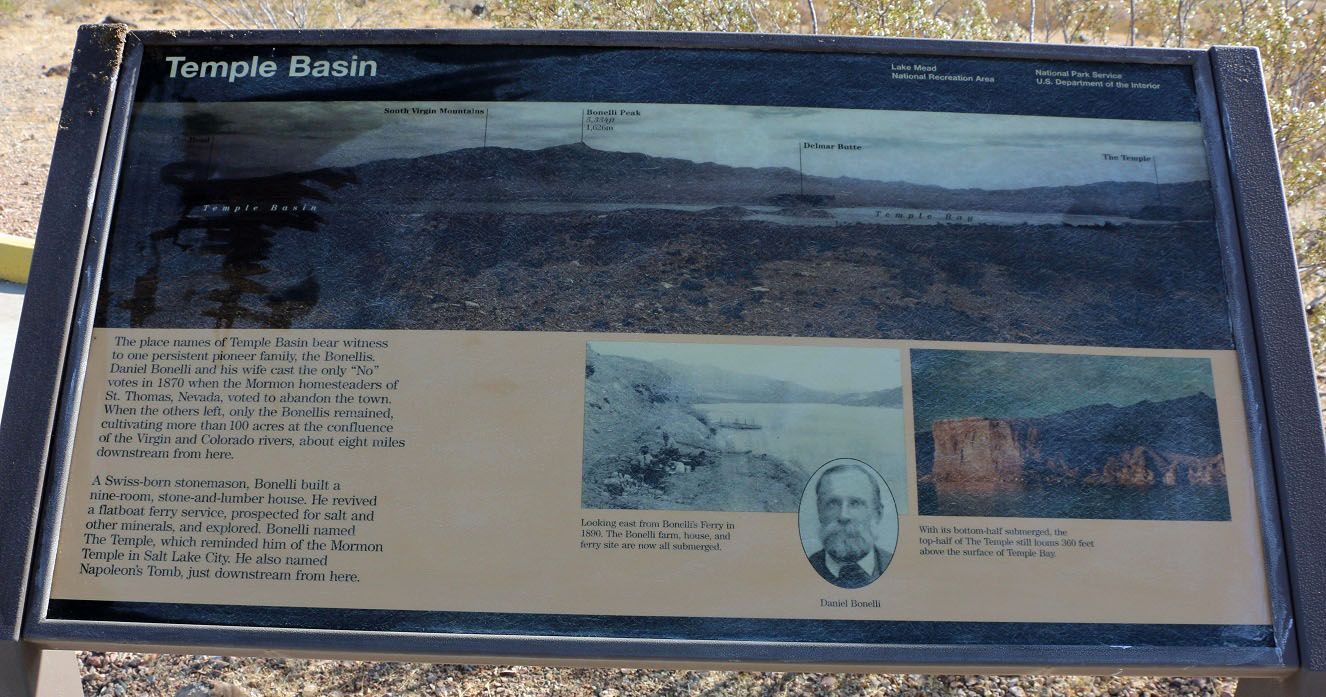 This plaque describes some history of Daniel Bonelli. He chose to stayed in the area after Brigham Young recalled the Mormons back to Salt Lake City. He built and operated a ferry across the Colorado River, mined salt, and built a home. 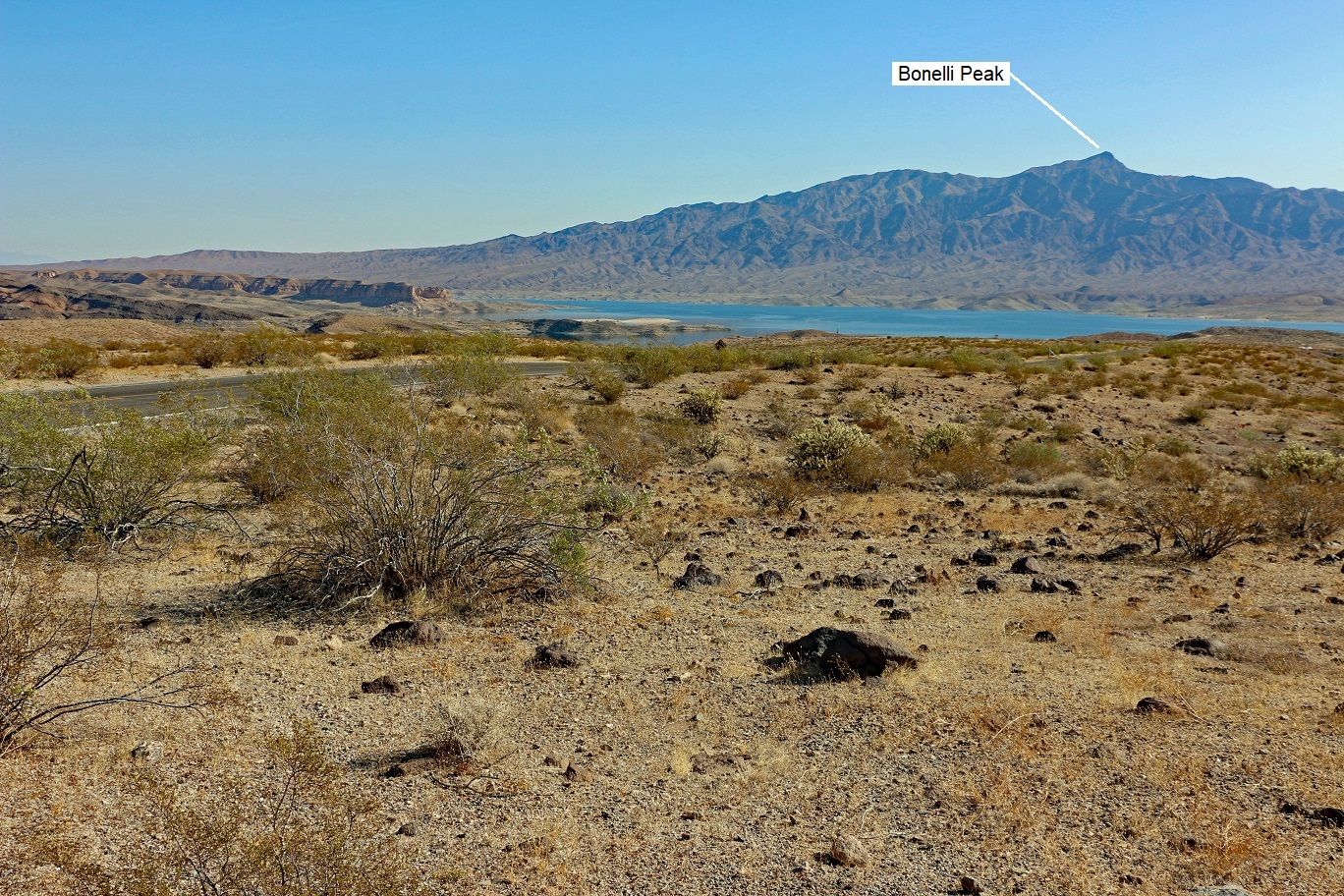 The road to Temple Bar Marina looking north. Bonelli Peak can be seen across Lake Mead.
OP
A 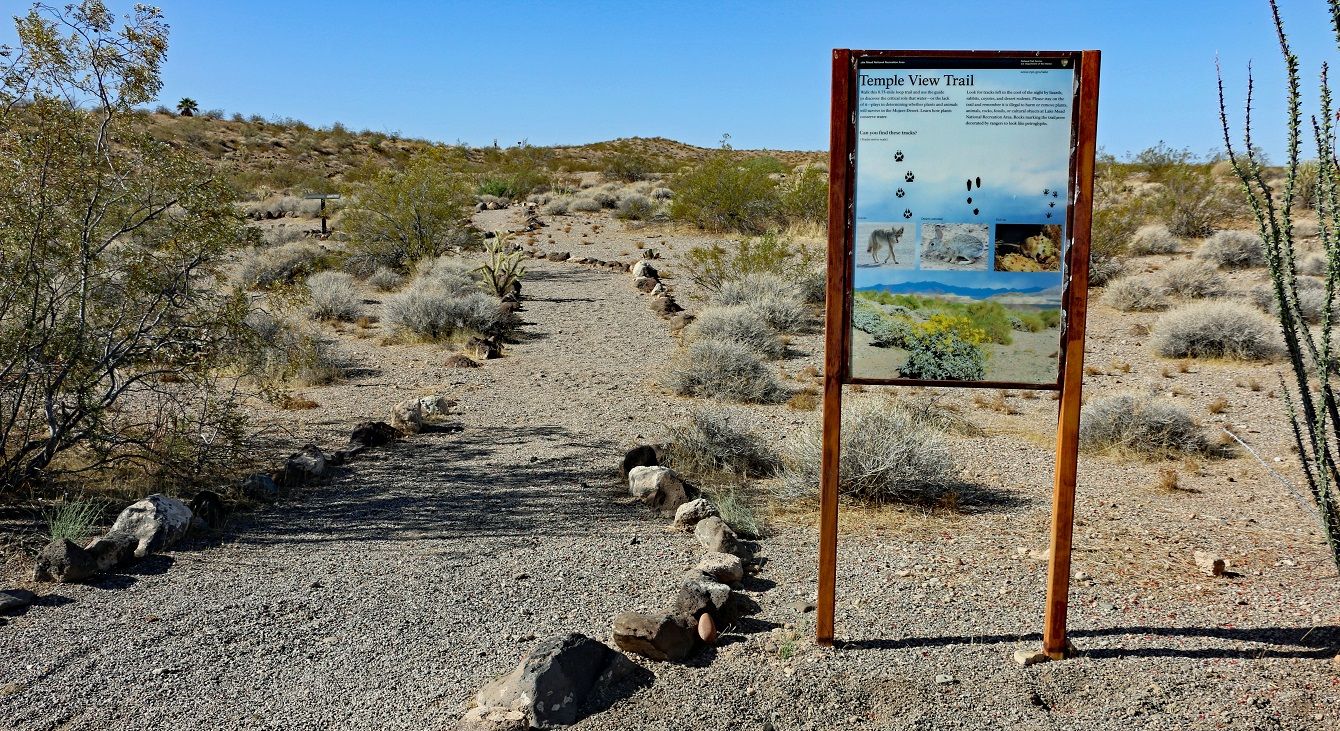 Next to the Temple Basin Ranger Station and Visitor Center Is this nature trail. 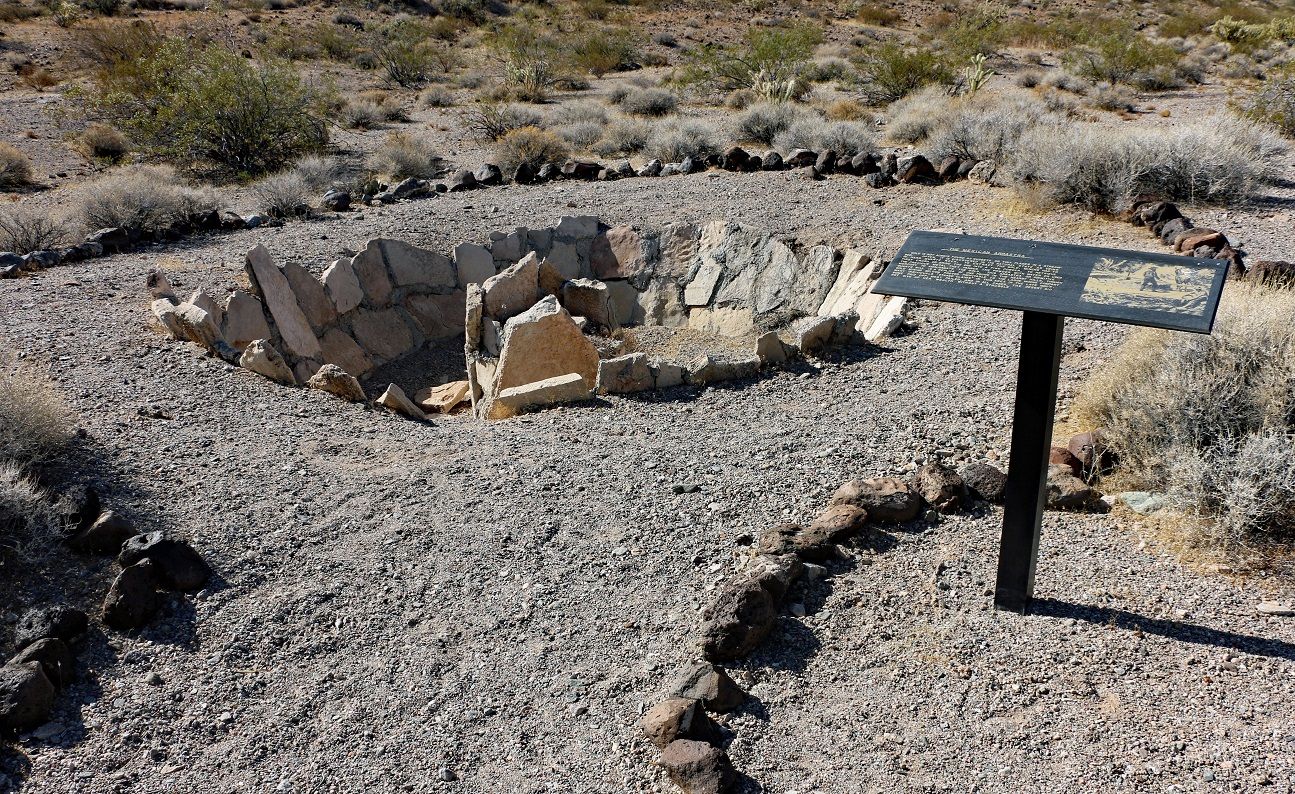 The first exhibit is an arrastra, a primitive method of grinding rock and ore.

A National Park Service archaeology report of the area indicates that the arrastra was relocated from a site to the west. 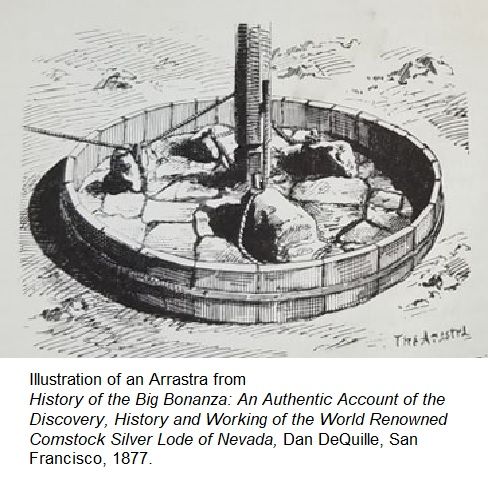 Illustration showing a clearer example of the drag stones used in an arrastra to crush the ore.
OP
A 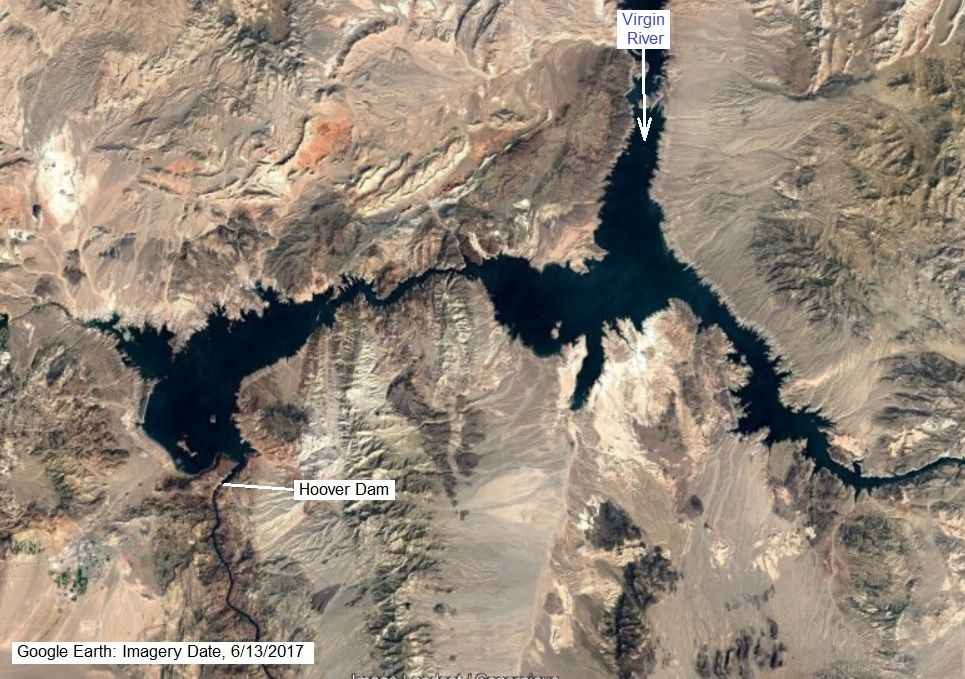 A recent aerial view of the water level in Lake Mead. 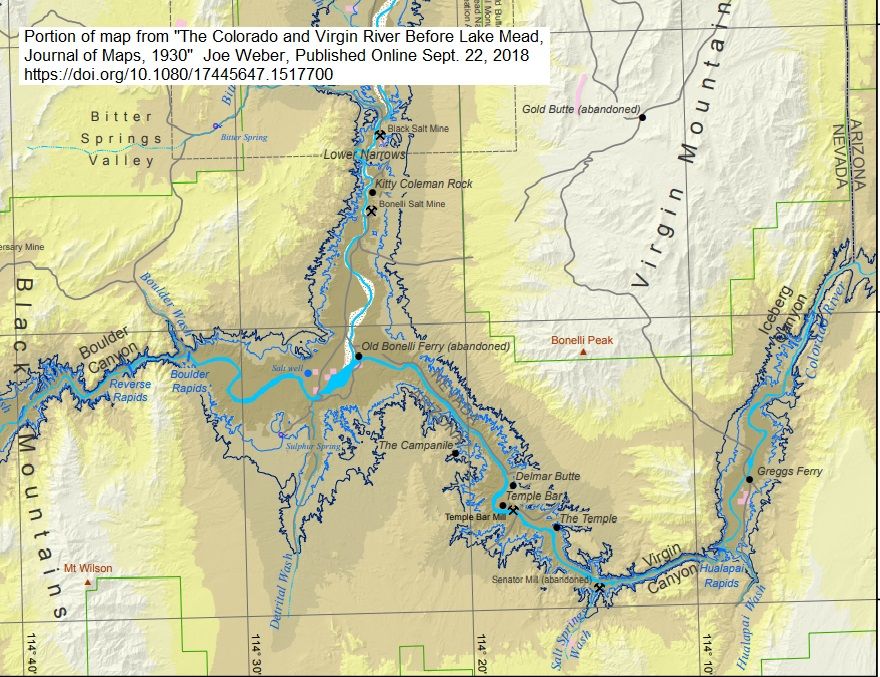 This is map showing the water level of the Colorado River and Virgin River before the construction of Hoover Dam. Note that at Temple Bar is the notation “Temple Bar Mill” and upriver there is “Senator Mill (abandoned).” The National Park Service Historical Report did not mention what was being milled. They might have been constructed to process gold ore from Gold Butte, NV to the north and northeast and/or the mines at White Cliffs, AZ to the south. 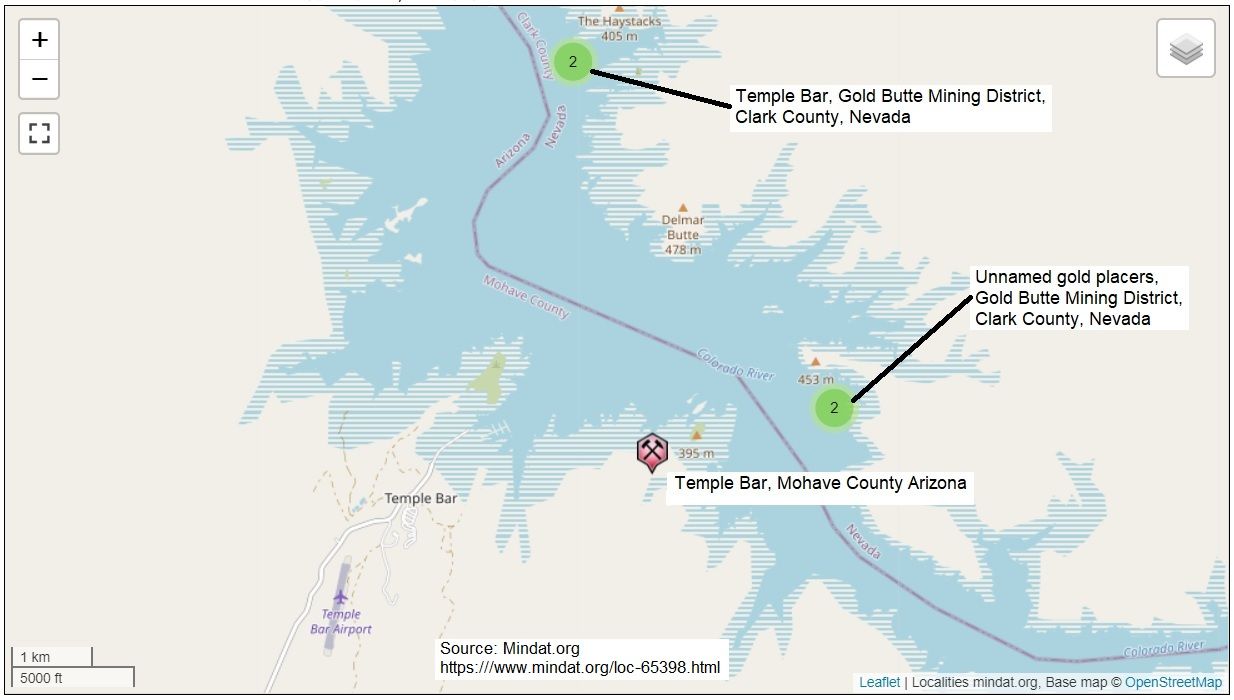 Information from Mindat.org indicates gold placers at and around Temple Bar. 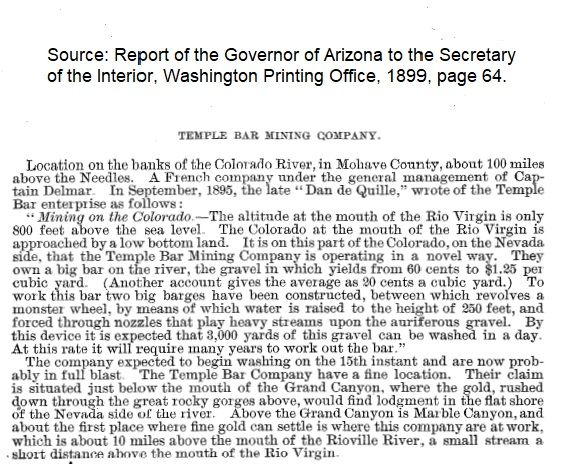 This is a report of the gold mining operations at Temple Bar.

Information on the Gold Butte District (now a part of the Gold Butte National Monument) from the Western Mining History website
https://westernmininghistory.com/library/38089/page1/

“In the summer of 1967 the gravels around Gold Butte were placered with the aid of a steam shovel, and the Temple Bar area was being worked for both lode and placer gold, which were transported from the area by barges (P.M. Blacet, oral communication 1967)” 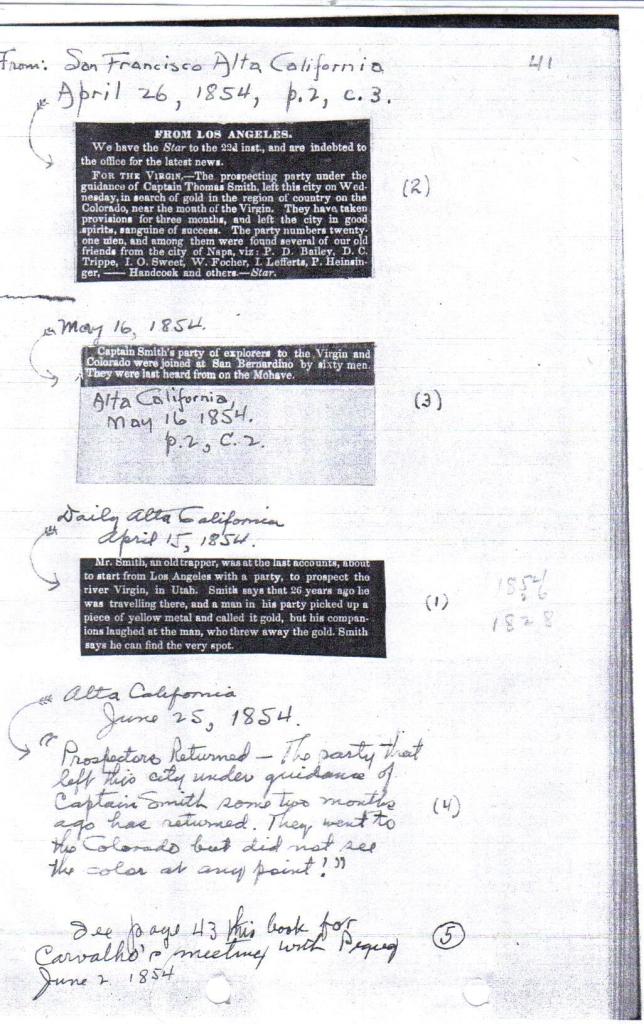 This page from Philip A. Bailey's research notes was posted by Pegleglooker.

This information provides credibility to the claim that George Yount actually found gold in this area. If Pegleg Smith did not abort the trip to the confluence of the Colorado and Virgin Rivers, he would have led the group to a low yielding gold placer deposit.
You must log in or register to reply here.

The Discovery of Black Gold Nuggets in the Imperial Valley Area