I was curious why the 24K uses a Ni cad pack instead of NiMh ?

Does not seem to be much info on the 24k. I bought one a few months ago and have just now started using it. Not sure how to compare it to the equinox 800, which I have used longer. But I would say both have their pluses and minuses. With the equinox I have found gold and native silver and I have learned the tones. I have not found gold with the 24k, and I have gone to the same spots.

I did get discouraged at first because my signals would all of a sudden vanish, one of the problems I also had on the equinox until I took it off auto ground balance. But this weekend I think I may be slowly getting the hang of the 24k, found some Native Arizona copper and Silver, the copper will shine after is goes in the ultra sonic cleaner, I've found many samples in the past, sorry about the phone photos, not as clear as they should be. 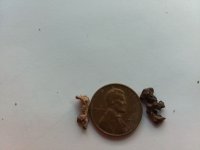 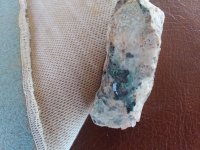 And no it is not magnetite just because it looks black, I have plenty of that lying around.
You must log in or register to reply here.

ALL NEW Garrett Goldmaster 24k Metal Detector is out!!!