This tale is taken from Barry Storm's book, "Thunder Gods Gold." I'll first present the pages as they were printed, then I'll later present some personal comments. 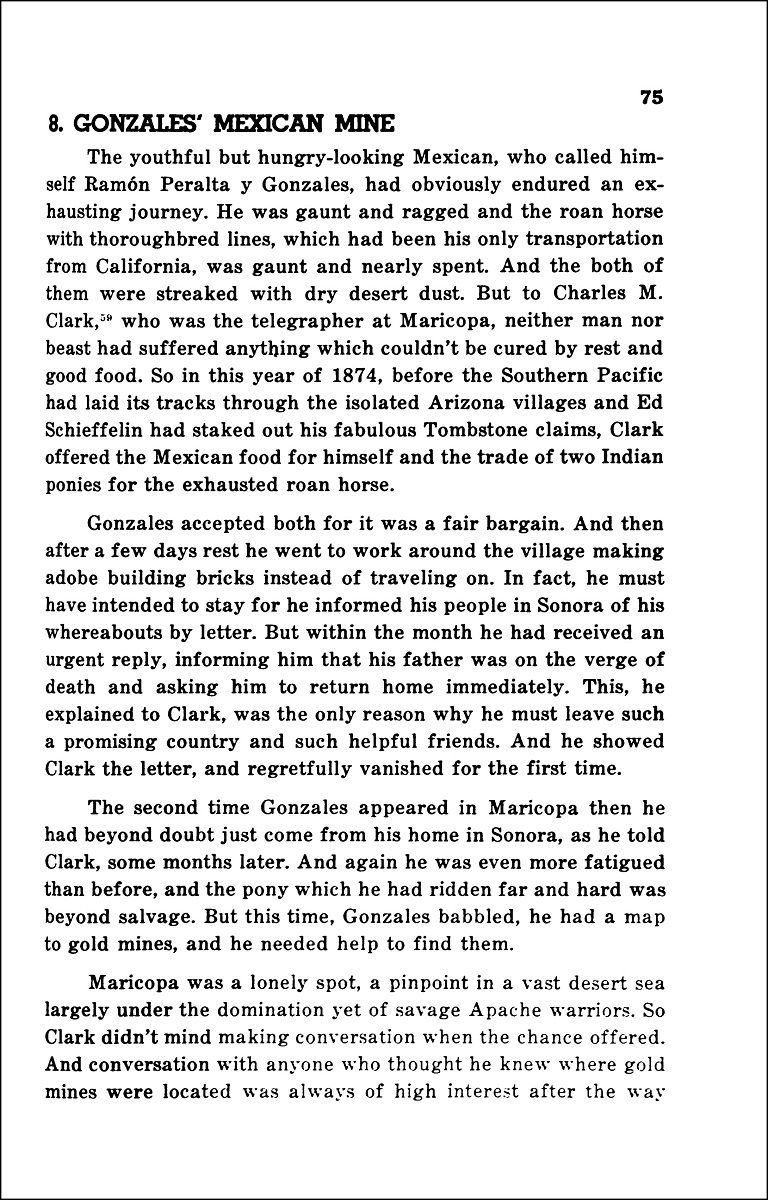 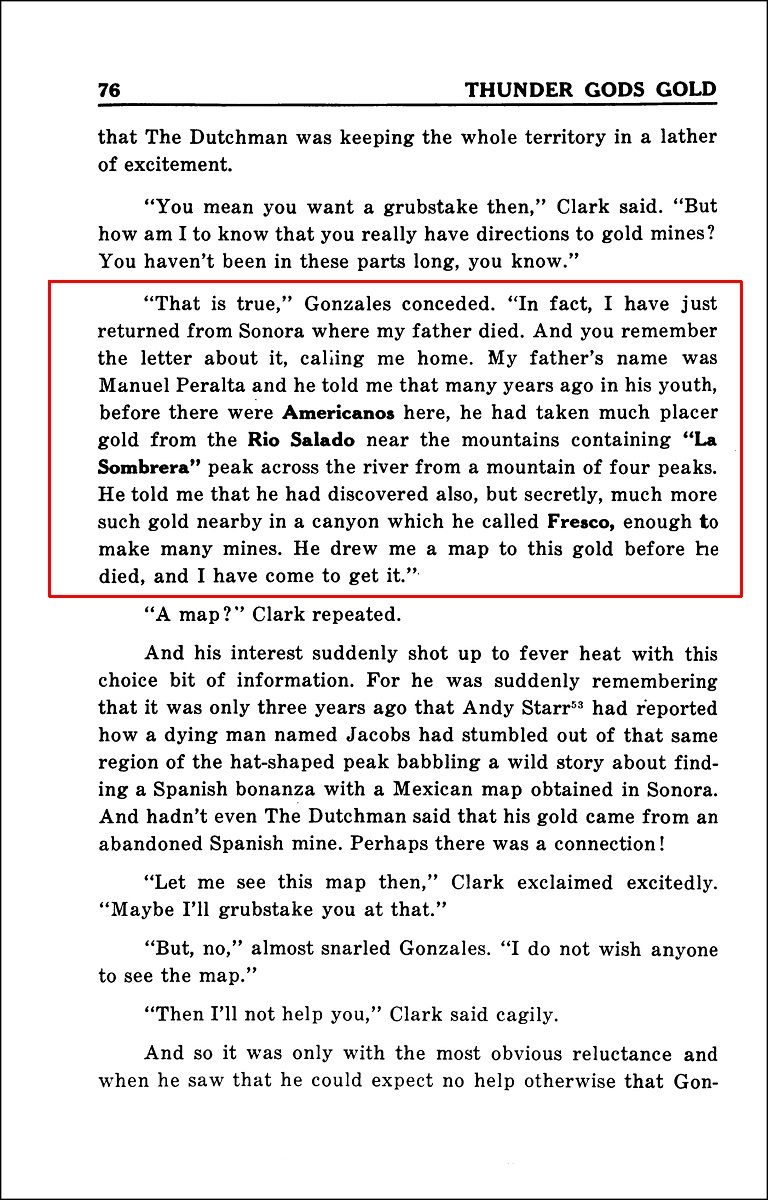 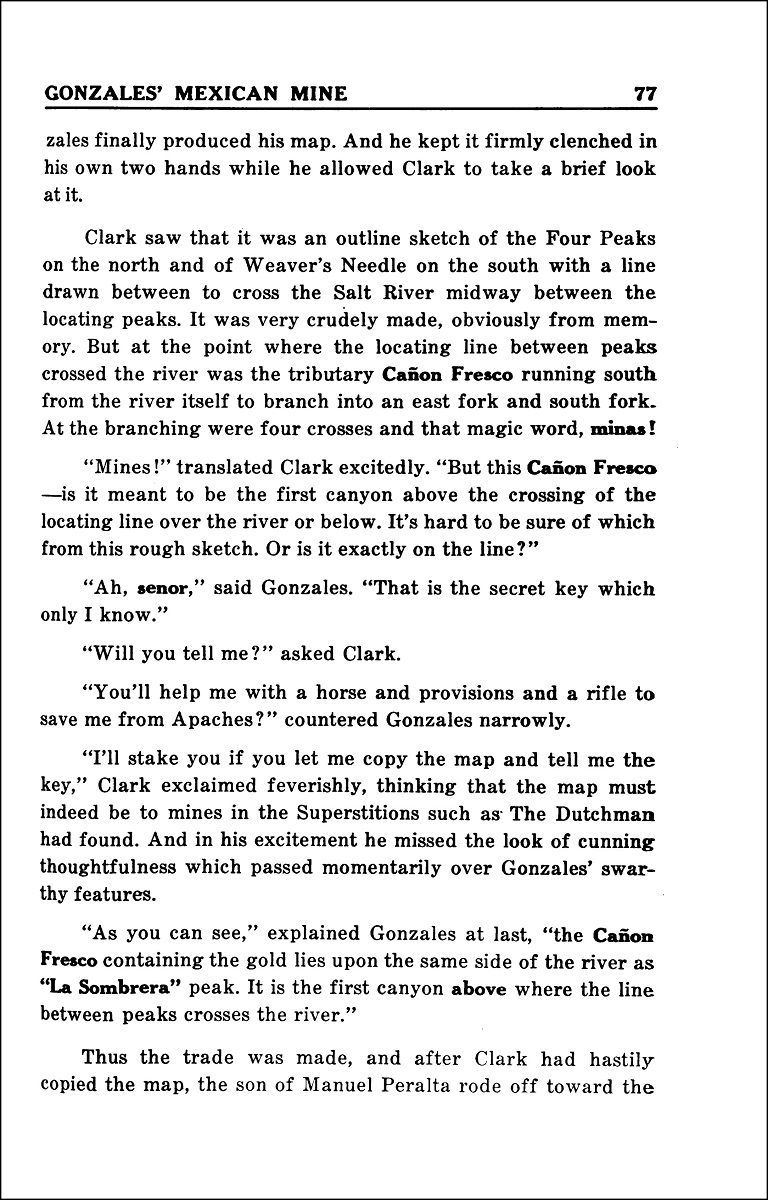 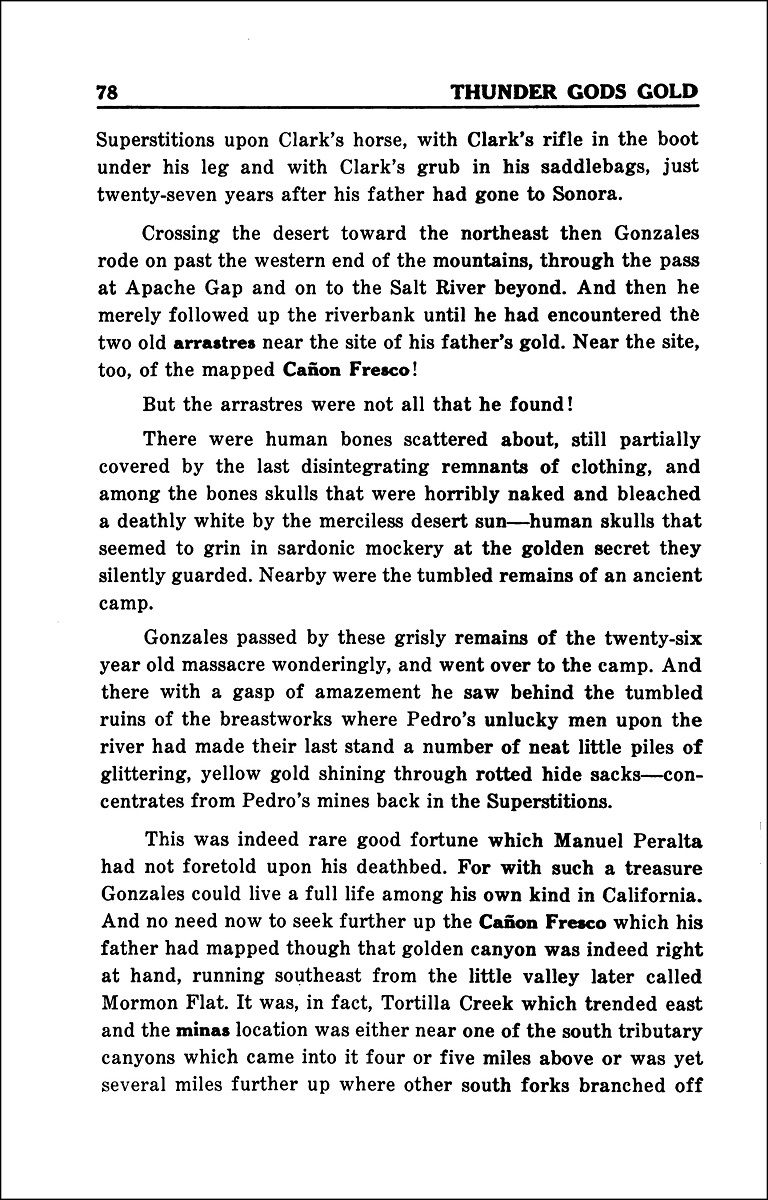 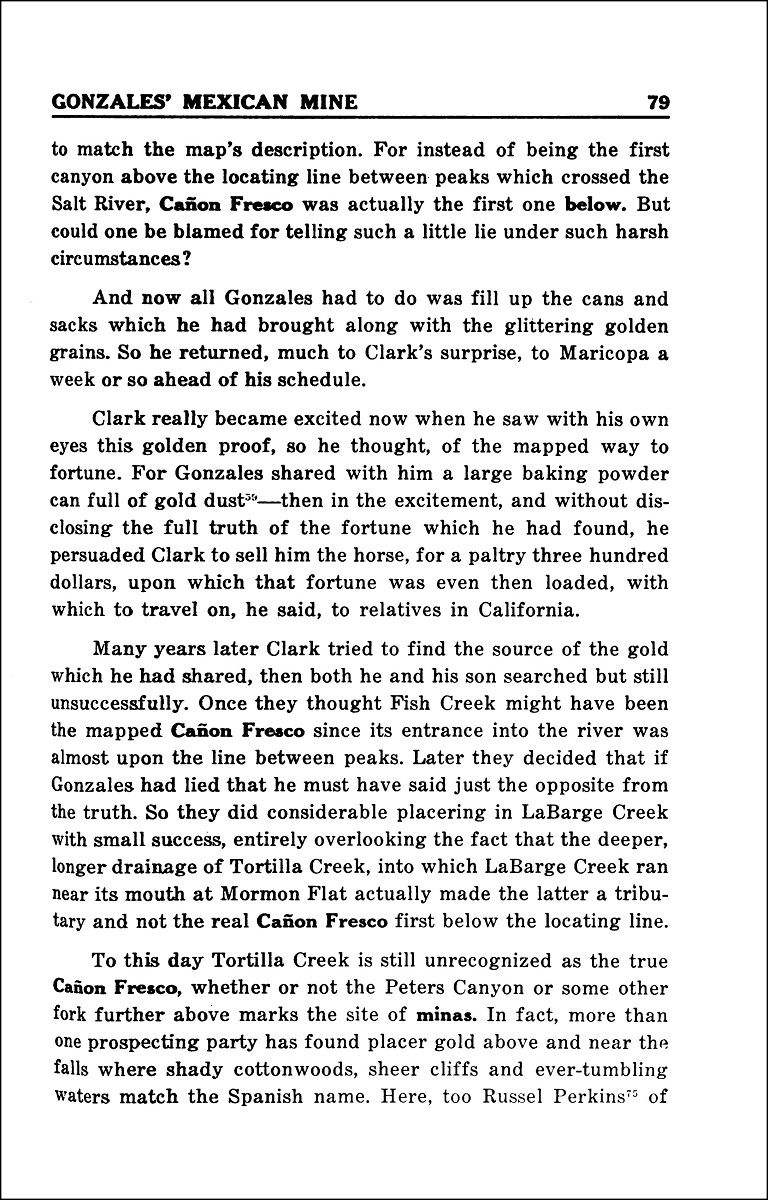 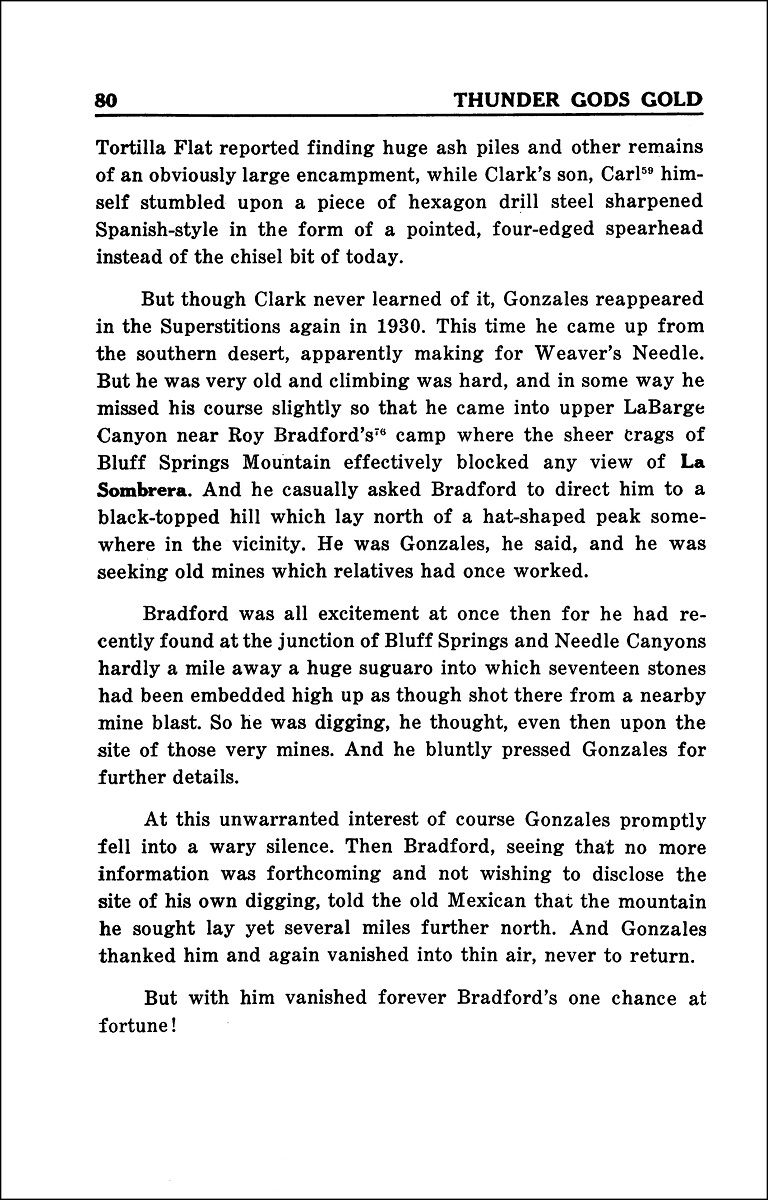 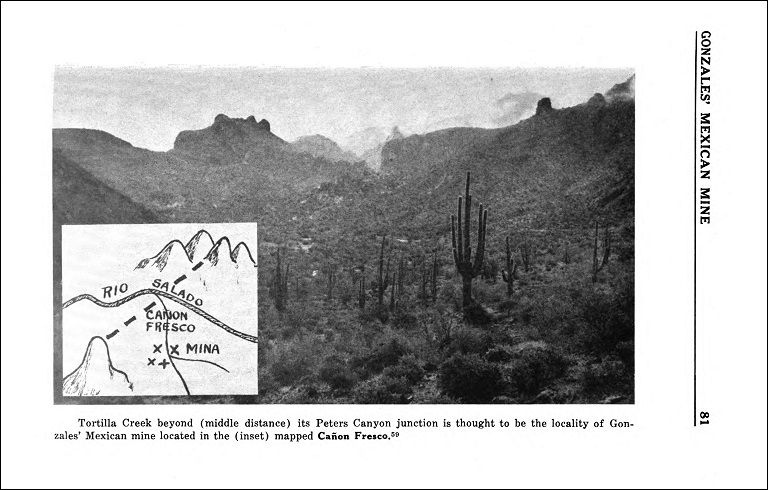 The hand-drawn map, shown as an inset on page 81, is very crude. The first thing I noticed was that the line on the map connecting Four Peaks with Weavers Needle is not oriented correctly on the compass. In the GE image below, I've rotated the map to the correct orientation. Doing this makes the clues "above the line" and "below the line" even more vague than in the original text. With the map rotated, "left of the line" or "right of the line" would make more sense. I've concluded that the map is useless for locating the mouth of the canyon where it joins the Salt River.

What is useful on the map is where it shows "mina" at the junction of Canon Fresco with a tributary. What is useful in the text is the mention of placer, not lode, gold. So, I've concluded that "mina" marks a field of placer deposits. While that placer gold was probably first located by panning close to the surface, higher yields were undoubtedly found by trenching much deeper. Some placer gold in Mohave County, Arizona, near the Colorado River, was recovered by digging shafts and tunneling into the compacted river gravels.

If we have to take the map as a common map made by a kid or an ordinary person who wanted to describe a region he has hiked or searched, then the map shows as Canon Fresco the Fish Creek.
But here enter the other clues about the Peraltas and their mining regions:

First, all their maps are coded and what you can see, represent different regions than what you believe.

Second, the Peraltas never have a camp at or ever reached Fish Creek. Their research was for something else which has a close relation with La Sombrera peak ( Weaver's Needle for the mortals of today ). So, they panned all the canyons which came down from Weavers Needle, in seach for an important source of gold which was related to the Spanish king's fifth. They never found that source but were very close, and in that process , they found many gold outcrops and opened mines.

Their camps were: one at the junction of Tortilla Creek with LaBarge Canyon, another one was in Needle Canyon close to the junction with Bluff Spring Canyon on the east side of Black Top Mesa, also this camp later moved in LaBarge Cayon close to White Spring, another camp was on Bluff Spring Mountain in the valley just a quarter mile south from the Bluff Mountain Spring and about 120 yards up a side canyon to the west, and the last camp was in East Boulder Canyon in the Laurel grove just southwest from Black Top Mesa.

As i mentioned in another threads concerning Gonzales mina and map, this map is coded and it's very difficult to decrypt for a person who is not familiar with Spanish/Mexican treasure map's codes. Myself, I grew up with these kind of maps under my pillow. It's like the Ohm's law for a physicist.
I will give some clues about the Gonzales map:
- The line was drew for the location where it's crossing Canon Fresco, and to use it in combination with a code written on the map
- the canyon on the map it's not Canon Fresco but a side canyon which starts where the line it's crossing Canon Fresco.
- the " Xs " on the map represent 30x10= 300, and are degrees for the side canyon, from where the line it's crossing Canon Fresco
And now a clue concerning the Gonzales story written by Barry Storm: the camp Gonzales has found, was not that which was close to Salt River. Gonzales lied to Clark about the map's key and the route he followed. The truth is, the very rich gold placer that Gonzales was talking about, it's at the junction of the side canyon from the map with the Canon Fresco. Gonzales fooled again Charles Clark, when he drew a map for him for the rich gold placer, using a mirrored image. Maybe he wanted to play " treasure codes " with Clark, keeping the secrets of the gold mines and placers for himself. He didn't know in the future would be developed a science concerning Spanish/Mexican maps decryption.
Last edited: Dec 3, 2022
You must log in or register to reply here.