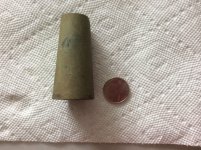 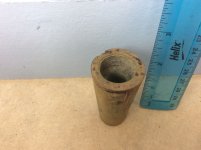 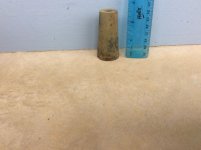 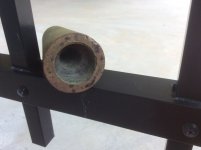 I found this while metal detecting a site that has seen Army encampments dating from 1850s thru post WWI. It is very heavy. Any guesses?
Sort by date Sort by votes

Reminds me of a sand blasting tip.
Upvote 0
C

USNFLYR, your guess that your "heavy solid brass" find is an Artillery relic is correct. Specifically, it is a US Army artillery "driven" (not threaded) Seacoast Defense Watercap (waterproof-cap) fuzeplug. The screw-in waterproof cap (a thick brass disc with threading on its sides -- see photo below) is missing from your fuzeplug.

Your find was manufactured during the 1850s through 90s.... but of course, very few were made before or after the war. The army artillery Driven Seacoast fuzeplug came in two sizes. The version you found is the smaller size, made for use in 12-Pounder (4.62"-caliber) through 32-Pounder (6.4"-caliber) cannonballs. It was not used in cylindrical-bodied shells, just in cannonballs.

The term Seacoast Defense referred to major harbor fortifications and their defensive artillery, which was operated by the Army. The US Navy had its own version of Watercap fuze... which had a threaded body, for screwing into a shell's fuzehole. Your "driven" fuze is shaped like a cork, so it could simply be hammered (driven) into a non-threaded tapered fuzehole.

Sidenote:
Although the larger size of brass Driven Seacoast fuzeplug is quite rare, your small version is even more rare. If it wasn't missing its watercap (disc), it would be worth about $500. You might want to hunt the spot where you found it VERY carefully, in case the missing brass watercap disc is nearby. Was there any civil war combat at that location?

To help you recognize the watercap, here's a photo. It is the brass disc at upper right. The two holes on the rim are spanner-wrench holes, for screwing the disc into the fuzeplug's main body. The smaller holes in the disc's recessed center allowed flame from the cannon's propellant powder blast to penetrate the waterproof disc and ignite the paper-bodied timefuze inside the fuzeplug's main body. (Actually, the one in the photo is the Confederate version, because I do not have a photo of the yankee version, which looks very similar.)

Again I want to thank you for your informative and timely response. You remain one of the reasons I read this forum, as your guidance and expertise broadens my education about the Civil War.

I'll certainly strike out to area where I found this this fuse and search for the missing disc.

USNFLYR
Upvote 0
You must log in or register to reply here.

Iron hook/tool from CW cavalry camp. Anyone recognize it?