I love collecting pincherettes and I have several chrome plated ones. However I just purchased this brass one that has China on the bottom and some symbol. I?m thinking 1940s to 1950s, but maybe someone could chime in with a more accurate determination. Thanks. 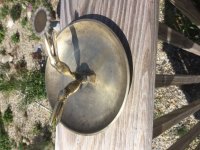 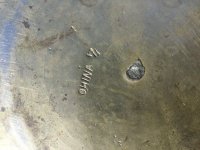 Made in china
Upvote 0

That’s a fun item. I don’t know what the Chinese character might be, but there are three possibilities for dating:

1. That particular design was registered by Ray R. Hutcheson for Diecasters, Inc. of New York, NY on 16 December 1935 and granted for a term of 7 years on 18 Feb 1936. There was a later ‘crocodile’ version too.,, both produced as chrome-plated and they carry the relevant patent numbers. As far as I can tell, that design patent wasn’t renewed and so could have been copied by a Chinese manufacturer after expiry in early 1942. Certainly the design was copied by others in the 1950s but there was no formal trade between mainland China and the US after the Chinese revolution of 1949, so that would give you a narrow window between 1942-1949. 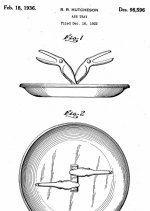 2. US trade with China resumed in the 1970s, so it could have been made after that (although the appearance suggests not). Also, by this time “China” had become the People’s Republic of China and the marks used for export generally reflected that change, rather than just using the single word “China”. So, I think that’s unlikely.

3. If it had been made prior to Hutcheson’s design patent registration and exported to the US then it would have had to be marked with more than just country of origin in English after 1914 (as per the McKinley Tariff Act). The Act additionally required the words “made in…” in English, although that part of the requirement wasn’t rigorously enforced until around 1921. The requirement for “made in…” was dropped in the 1930 revision to the Act. So, it could conceivably have been made in the windows between 1914 and 1921, or between 1930 and 1936. I think that’s also unlikely since Hutcheson shouldn’t have been able to get a design patent for an item which already had “prior art”, unless the design was exclusively his to begin with and simply hadn’t yet been registered.

Red-Coat. This is what I was thinking also. I am keeping your discourse on “Made in” handy because I believe it is relevant to so many items.

Today I learned our old ashtray handed down is a pincherette! Thanks!

Lenrac2 said:
Today I learned our old ashtray handed down is a pincherette! Thanks!

Yup, they are interesting. Here?s a few in my small collection.. 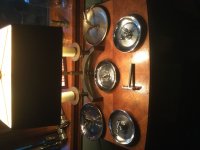 Interesting stamp. Rotating the image with the word China shows the character 么 me. 么 me is a suffix used in interogatives, pronouns and adverbs. For example 什么 shenme (what) 那么 name (like that; in that way; so), 这么zhema (so; such; this way; like this) However it can also mean the character 幺 yao or mi which is a surname in Chinese or could mean youngest, tiny, small. The character is generally not on its own but with another character. 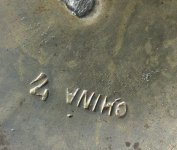 Guess it could be but not a very good engraving on the mould. 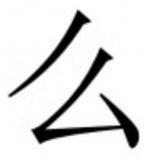