Help with I.D of a awesome flat button

Found this flat button today, I’ve tried looking it up online but I can’t find anything about it, the back is plain. Any help would be greatly appreciated! Dug in north central Ohio 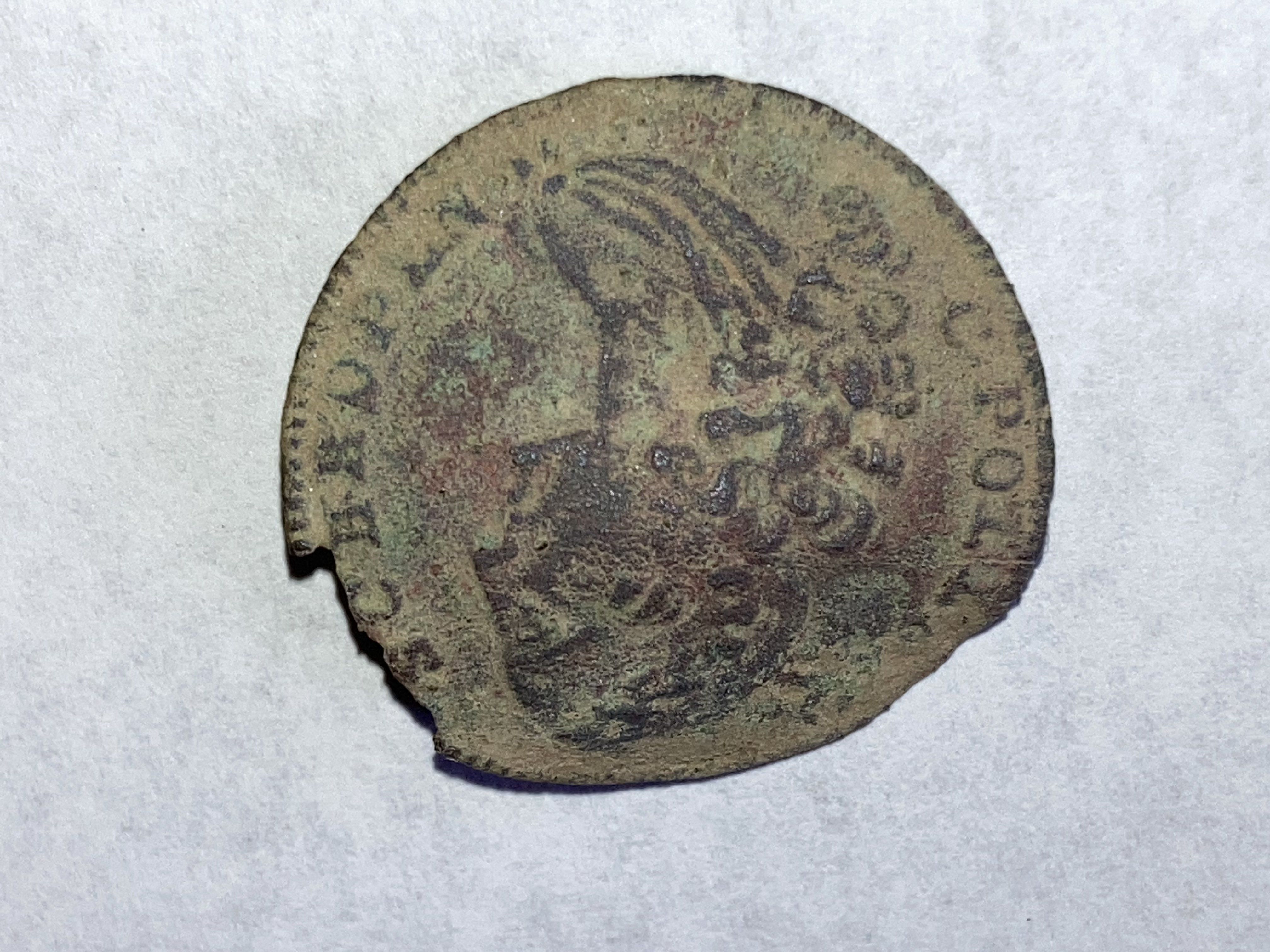 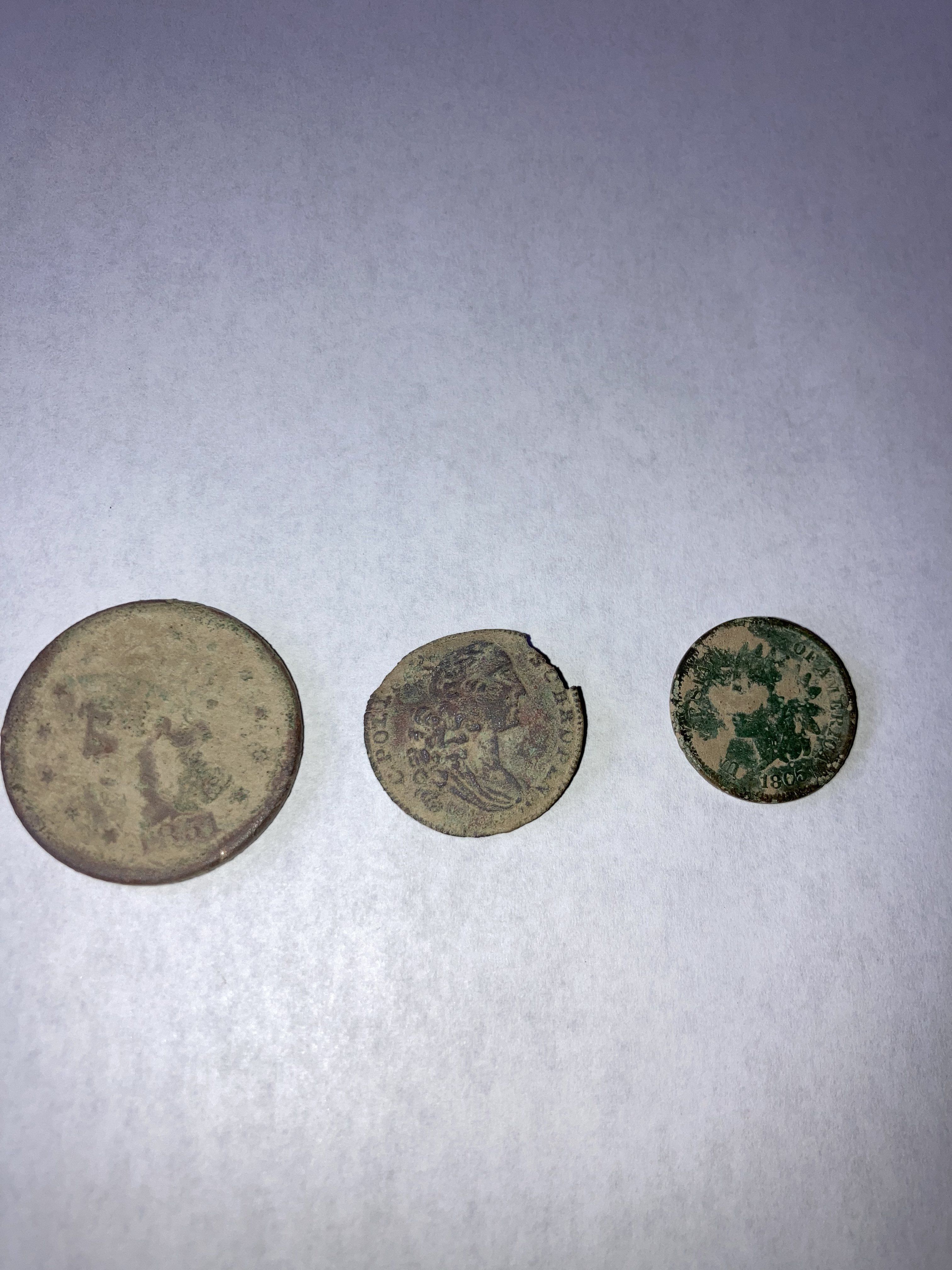 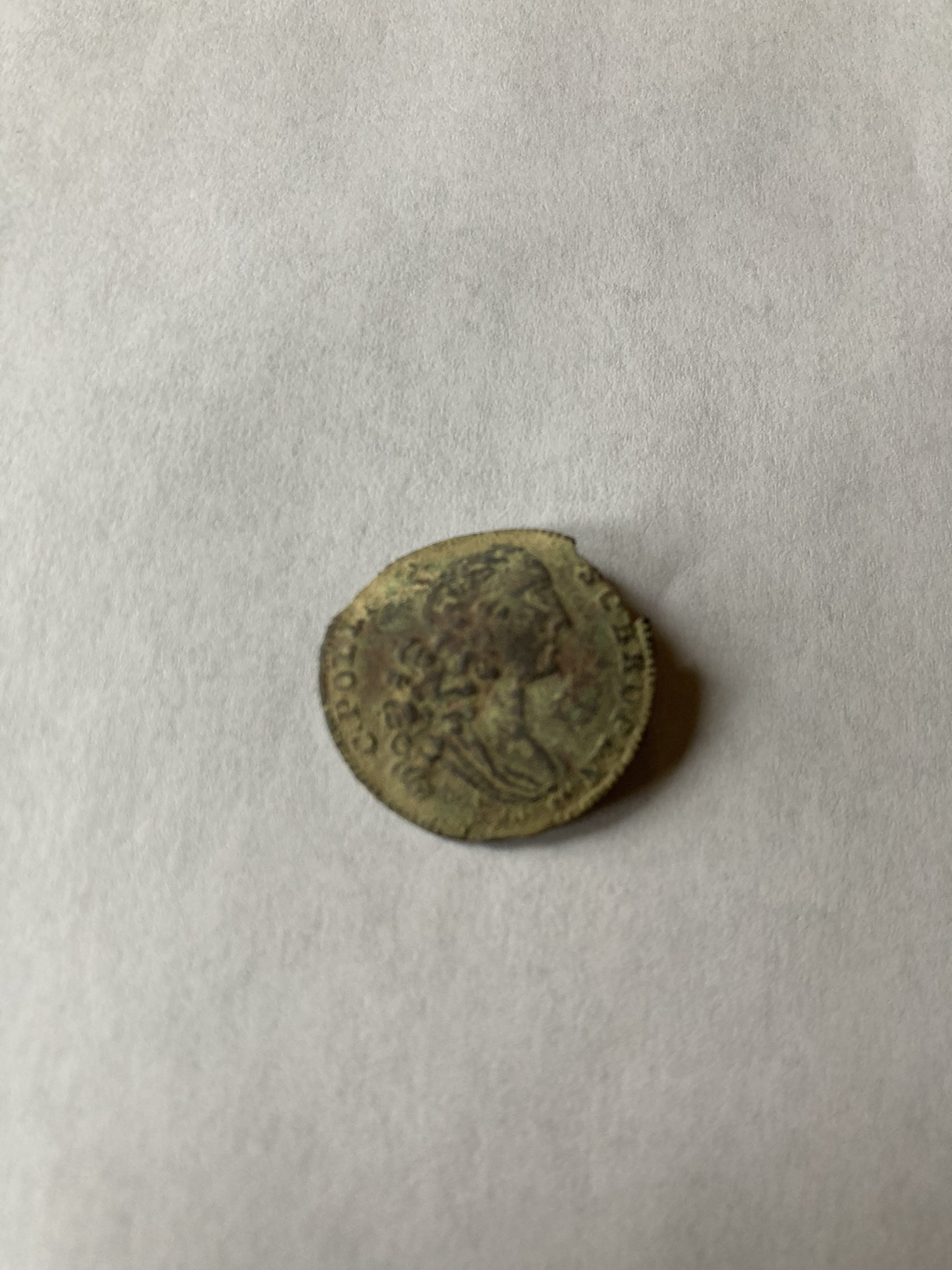 Does it have a backmark and could we see it please?
OP
F

BuckleBoy said:
Does it have a backmark and could we see it please?
Click to expand...

No backstamp, it’s really thin, may of been hammered?

Can't help with ID, but nice!

I somehow doubt that this is a button, or at least doubt that it started life as one.

I'm not seeing it as a coin, but perhaps some kind of trader's advertising token? As far as I can tell, there seems to be a name as "C. PO..." (perhaps "C. POLL..") and then a word that looks like "SCHROPEN".

None of that rings any bells for me in the world of coins or tokens. All I can offer is that "schropen" is an old fashioned German word for "currycombs" (plural), as in horse-grooming.
L

That's really cool! I hope you find out more about it!
S

We need to see the reverse for clues, looks like a Jetton to me.

CRUSADER said:
We need to see the reverse for clues, looks like a Jetton to me.
Click to expand...

Yes, I toyed with that idea too, but couldn’t find a satisfactory comparison. The portrait looks to me like it might be Friedrich Wilhelm II of Prussia, which would put it in the second half of the 1700s (or a later nostalgic piece).

Since 1713 parts of the Low Countries which are now within the Netherlands were ruled by the Kingdom of Prussia. As well as the “currycombs” meaning of “schropen” that I mentioned, in the archaic vocabulary of the region it also had a general meaning of “scrapings” in the sense of scrap/waste not regarded as having any value. In the context of coinage, such as in “geldt schropen”, it then takes on the meaning of fake/counterfeit money or more liberally “worthless/not real money”. I wonder if that’s how a token (or a jetton) might be marked it were made in resemblance to a coin, to prevent accusations that it was intended to deceive.

A bit of a stretch I know, and that’s assuming the word is actually “schropen”. There is no place of that name as far as I know, apart from the Schropen Pass (now referred to as “Schrofen”) which traverses the current German/Austrian border. It could conceivably be a surname (and therefore also potentially a business name) but the "C. PO..." letters look more like a name, which is then followed by “SCHROPEN”.

Might is be SCHRUPEN which in German means Rough? But whatever it is, a reverse shot is needed by the OP if we are going to take this further....
OP
F

Here’s a picture of the back, that is a IHP beside it for size comparison 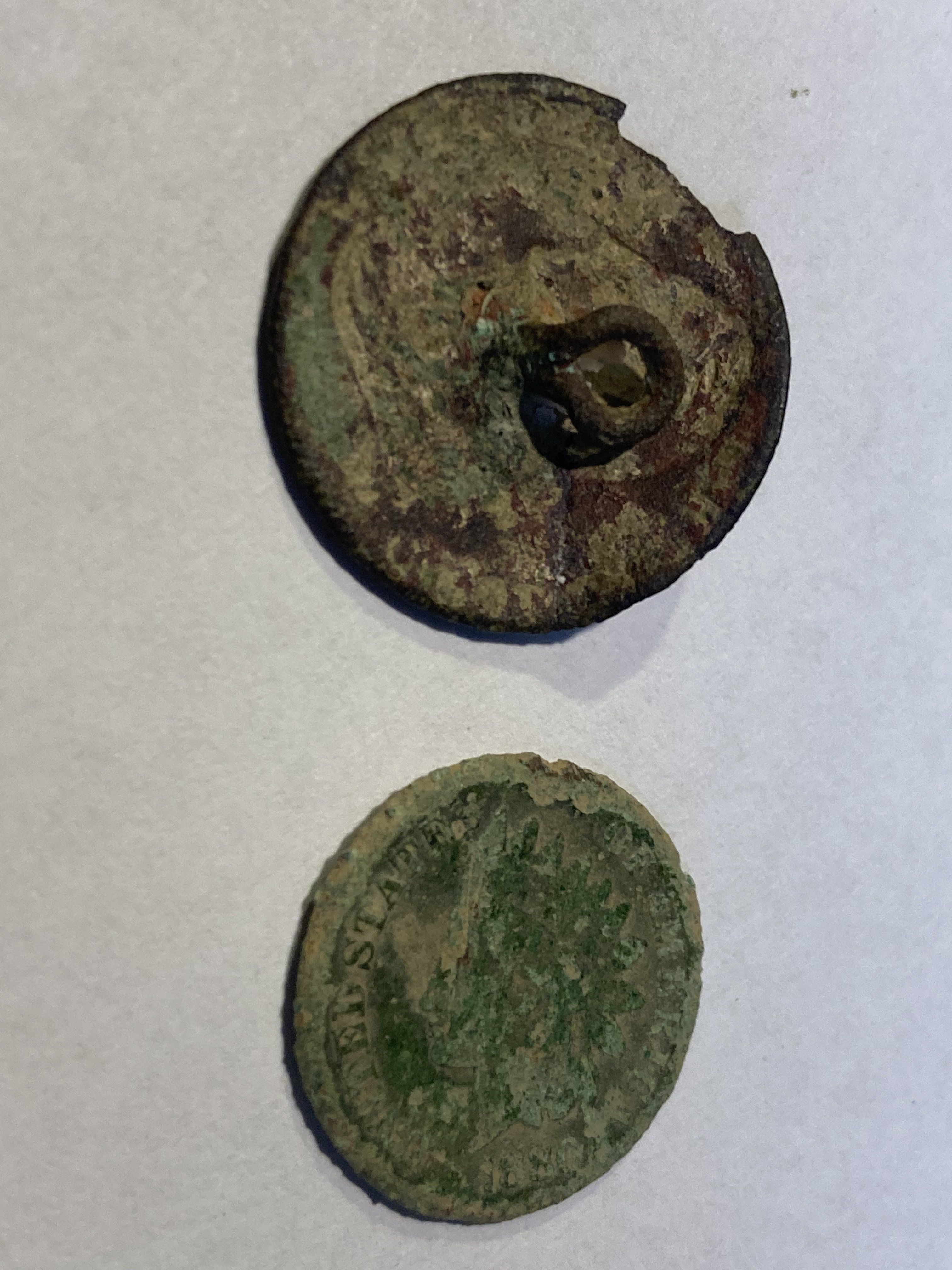 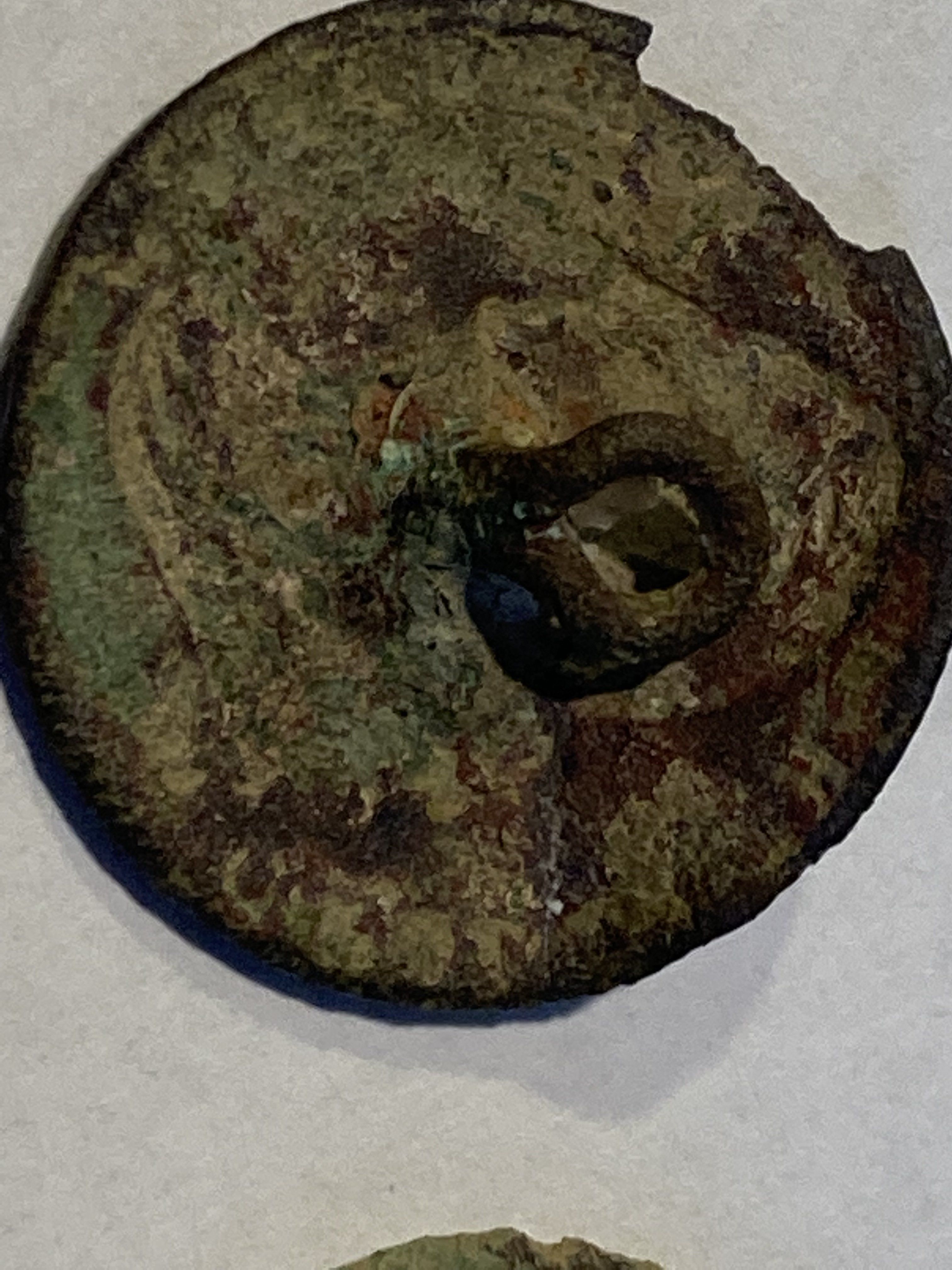 Your now adding to the analysis.
It's a thin pressed sheet brass/copper construction, which is odd for the type of applied shank.
A right mix!
The sheet pressed construction implies late 19th C & the applied shank implies 18th C.
I'm stumped, other than we now know it was likely designed as a button & not adapted later from another coin/token/jetton etc.
Assuming RedCoat is right with this:
" (perhaps "C. POLL..")''
We can add by the impression on the reverse:
C. POLL?? H
You must log in or register to reply here.

Live ammo in a schoolyard - notify the police or not?

First hunt for me

Any Russian Linguists Out There?
2