How Do Coins Etc "Migrate" Into the Soil?

I am sure there are more than a dozen variables, but ignoring the "Butterfly Effect," what do you think causes coins to migrate deeper into the soil over time? Is there a rule of thumb that can be applied? For example, in the same lot, if a quarter is down 2 inches and another quarter is down 4 inches, what would you guess the difference in time between the two to be?
Upvote 0

From my days in the archaeology, they coins get covered. Theoretically if you did a time lapse of the coin, and set a measuring device down about 6" with another 6" out of the ground, with the coin sitting on the ground flat. Eventually the coin would migrate down into the ground, it gets covered up, it doesn't sink. Now with the rain and all the water in the soil the mud can wash over the coin quicker and cover it faster. An animal stepping on it can hasten the process.

You can also have soil added or scraped away to level out a lawn. I have dug 100 year old coins from less than an inch and dug a clad coin from 6 inches deep, all from the same yard.

You can also have soil added or scraped away to level out a lawn. I have dug 100 year old coins from less than an inch and dug a clad coin from 6 inches deep, all from the same yard.
Click to expand...

I've seen this question come up fairly often. Consensus? - too many variables and no general rule.
luvsdux

it's like whenever they pave a street...when the paving crews leave you have a lip at the edge of the pavement an inch or so high but as time passes, in a couple or three years the dirt will eventually be level with the pavement again

Ultimately too many variables, but here is my hypothesis...you are going to find older coins at a more shallow depth on small private property sites because most home owners keep their lawn cut and other yard waste and organic matter (leaves, etc.) off the yard. In parks, farms, large homesteads, and the woods where debris are less of a concern or no concern at all...items dropped are going to be buried further down.
Last edited: Dec 25, 2013

smokeythecat said:
From my days in the archaeology, they coins get covered. Theoretically if you did a time lapse of the coin, and set a measuring device down about 6" with another 6" out of the ground, with the coin sitting on the ground flat. Eventually the coin would migrate down into the ground, it gets covered up, it doesn't sink. Now with the rain and all the water in the soil the mud can wash over the coin quicker and cover it faster. An animal stepping on it can hasten the process.
Click to expand...

I agree with Smokey here. I don't think coins really sink much at all. I have found too many 200 year old coins at 5 inches or less. I think the reason many find clad or any other coins deeper is from landscaping, re-sodding or re-grading. I have found early coins in both the sandy soil of New England coastal areas and the thick dark dirt of N.Y. state, and all usually less than five inches deep. I started with a BFO around 1970, it had no ground balance or discrimination and much of the soil here in lower N.Y. state is fairly hot, robbing depth. Being the first in my area with a detector I found lots of coins and relics. I have gone back to some of the sites I hunted back then with a PI and an FBS machine and not really found many deeper targets. I have a friend who believe coins are actually pushed up by frost, but I disagree with him, I think they just lie there.

As an old tombstone setter,People claim that their stone has sunk. Really what has happened, the world is getting fatter, grass clippings rain wash,is the culprit.
OP
U

So based on these outstanding and insightful responses, it seems clear that coins are where they are and you just have to suck it up and look for them at whatever depth they are. In a way this wisdom is comforting because if you could have given me a rule of thumb to use, I would have asked if you also could tell me why I have so many orphaned socks. A prosperous and rewarding New Year to all. Thank you !!!

Now hold on... I've had it in my mind that in SW Florida, the soil is very soft and sandy, coupled w/ the 4 month long rainy season, that coins would sink. Is this just my noobie imagination, or do I have a valid point, given my location. other posts here have harder, more compact soils, from what I see in your locations.... thx for your help w/ this ...BWD

BWD, I have hunted a lot on a Massachusetts island that is mostly all very sandy soil, and still found colonial coins at less than 5" deep. I doubt that the Florida sandy soil is much different. Coins mostly get deeper than when they were dropped as I and others have said due to natural build up of soil over time from wind-blown dirt or sand, leaf or grass dying and becoming soil or man-made changing of the surface via grading, re-sodding etc. I think there is more than necessary interest among MDers to attain great depth if they are coin and jewelry hunters on land because having gone from early BFO machines to the latest VLF FBS machines I still don't find most of my finds below five inches if the site hasn't been re-landscaped at some time. I thought I'd go back to areas that I had scoured years ago with a modern high tech machine and get all the "deep stuff" I had missed with the early machines and actually found very few deeper targets at all. These places were private property owned by family and friends, and had not been hunted by anyone other than myself. If you're not finding it deep it's because it isn't there, just as if you're not finding it at 4" it isn't there. Gotta get the coil over a target to find it. I think that in general your Ace 350 will find as much coins and jewelry as an etrac or Deus at undisturbed sites if you use it to the best of it's ability. The super sensitive high end machines will outdo machines with lesser capabilities where there has been grading, re-sodding, etc, and small coins on edge that are deeper do to the man made changes to the surface.

the best way to describe soil in old ft myers is 'dry quick sand' , especially during now this our dry season.... thx for the insight, God Bless

Found this today. Residential Property. Small Yard. 1 cm down!! Once the detector "detected" it, I waved my pinpointer over it and identified the target. Yes that's how shallow it was! Before digging, the pinpointer detected it! Stuck my finger in the soil, and BOOM! 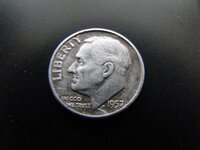 Lot of variables like everyone said, but as a general rule from my (albeit limited) experience the main question to ask yourself is, "Are debris (clippings, leaves) in this area picked up regularly or is this a space (farm, field, some park areas, woods) that sees limited (or no) maintenance?" If the space is maintained, you can expect finds at a shallow-er depth. If it's a "wild" area, expect to dig - deep.

IMO 95% of the time these coins aren't moving...they're just getting covered up with yard debris over the years.
N

I was detecting in a soccer field today and it's only been there 10 yrs. I found coins on the surface and all the way down to 6" deep. In this case i am sure it has to do with mowers and soccer players running on and over the grass. I am certain it not build up from mowing etc. It is from the soil being soggy at times and the pressure from the wheels on the mower forces the coin down because it can't go anywhere else.
G

lonesomebob said:
As an old tombstone setter,People claim that their stone has sunk. Really what has happened, the world is getting fatter, grass clippings rain wash,is the culprit.
Click to expand...

You're right Bob, I've noticed the same thing with concrete sidewalks, and driveways. Everyone wants them flush with their yard, I try to keep the concrete above the lawn 2 or 3 inches, in 8-10 years it will be flush, and eventually slightly low.

Too many times I've seen sidewalks with water on them because the sod has risen.
You must log in or register to reply here.

One Week to Detect...But Where?