One War in the Pacific and one Marianas W. Will get pics later, going to have a happy nap now. I only got $60 in quarters. 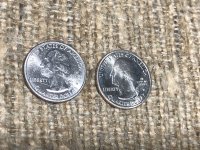 Two in just $60. The folks who have searched many bags without finding one of these may need to be reminded to watch their language if they respond....
OP

There weren't that many 2019's in the batch. The Marianas has significant scratches in them. I went through $20k of quarters, and now am finding them with more frequency.

It really is the proverbial needle in a haystack. I've been hitting the quarters since April. Stumbled on the one box that was solid American Memorial Philly except for 67 Lowell West Points mixed in. I've since found stragglers here and there. For me the holey bottom quarter boxes are the new quarters and rarely find them. Last week, my bank called and said they got 3 of the holey bottoms that I've been looking for and were saving them for me to pick up. I was giddy thinking about hitting another vein of West Points. 3 solid boxes (2 WIP; 1 American Memorial) of Philly quarters except for a single American Memorial West Point in the WIP box. A serious letdown also knowing that somewhere in my area a batch of West Points just hit and I caught a single one.
P

I’ve gone through about 5k in quarters in the last two months. Found 5 W’s.
OP

I’m up to 81 Ws. Best boxes were San Antonio’s that gave up 13 & 8 each. I pulled 7 from a solid American Memorial box. The rest were from mixed boxes and quarters from my tolls at work - 5-6 there.
My goal is to hit 100 before the end of the year.
Good luck all!
You must log in or register to reply here.