I'm reaching the breaking point with Oak Island ...how bout you ?

Next week is the one.
Something really important gets pushed up using that airlift thingy, and it looks like there is a skeleton down there.
Or they alluded there was a skeleton down that shaft.
All right, they just flashed a picture of an old skeleton, surely that means what we all thinks it means...doesn't it?

So far these guys have not found anything of worth, the Ghostbusters people have no real proof they ever came across a real ghost, the Bigfoot people have yet to find Bigfoot, the newer Seeking Hitler guys are doing a lot if traveling but so far guess what, still no proof of anything.
It goes on and on and on, if you are not one of those kind of people that are entertained by this "we think this is something really important and earthshaking" stuff but nothing ever quite seems to develop, style of entertainment, a modern version of the old timey cliffhangers serials from the early days in the movie houses, maybe it's time to do something else with your time.

Here's a thought...
The 1990's X Files show is running on reruns now on several channels and I think you can binge watch the entire thing on many streaming channels too.
Every episode a mystery, most of them get resolved at the end.
Ok some of them get resolved...and the whole series gets wrapped up by the last one.
Or it least it does after they came out with the movie a few years later...kinda.

All right not much is ever resolved, ever, the ending for Lost was a big disappointment too, Heroes lost me halfway through the second season, The Sopranos, yea, that ended really weird too.
At least these were all scripted, written and acted shows with actual actors.
If you thought they were reality that would have been crazy, if you could no longer suspend your belief and quit being entertained by them you just quit watching.
No harm, no foul...no regrets.

Same with this...
Trust me if you quit watching this one, or any other for that matter you will be ok.
The day someone finds actual treasure here, proof of Bigfoot or any ghost or they find proof Hitler didn't die in that bunker but actually spent his retirement years in a much more warmer climate than Germany you will know it for sure.
Any of these developments would surely result in front page news on most newspapers in the world, leading stories on all the tv news outlets, the main story on every news site and feed on the internet and everything else.
If something actually happens you will find out.

Till then maybe go watch a cooking show...they always seem to have a good satisfying ending.
Last edited: Jan 18, 2017
H

Golfer24 said:
I think last night show was one of the worst episodes I have seen. It was so boring and just a filler in my opinion.
Click to expand...

It seem that much of the show was repeats of past shows. Shame on the brothers.
P

One the edge of my seat waiting for another episode of Rick Lagina stroking his beard...

I'd say there's a max of 3 episodes left, producers are not going to pay for anymore. Good thing I was in the hospital for about a week, so everything from here on out is new to me.

Is it just me, or does anyone else think that Edith Bunker lives on and is speaking now thru Zena Halpern

a Lot of Fast forwarding this week again

What a waste of Time.
I could have been sitting here reading Posts

I've been watching it, mostly because I remember reading the Readers Digest story when I was young, and it seems like maybe they'll finally solve the thing. It is getting hard to watch though, when 90% of the episode is just filler and recapping what we've already seen, and the railroad spike being id'd as a part of a sailing ship just really got me. I think the belief that the original pit was nothing more than a sink hole and the people who say the "finds" in the hole were just salted in by people trying to get investors is probably accurate and there will be nothing found there.

At any rate, it's a bit easier to watch than Todd Hoffman saying he "screwed up bad" 10 times a show, so I guess I'll keep wasting an hour a week on it for now...

jeff of pa said:
a Lot of Fast forwarding this week again

What a waste of Time.
I could have been sitting here reading Posts

hang with it, Jeff. Next week they are going to dig a really deep hole. Should be lots of fun to watch.
OP
A

Yeah , I agree with you about Todd - I'm surprised that anybody continues to invest in him. Freddie Dodge is the only real miner on that crew in my estimation . If I hear Todd Hoffman say "Holy Frigg" one more time , I'm gonna throw a shoe at the tv !

NOLA_Ken said:
I've been watching it, mostly because I remember reading the Readers Digest story when I was young, and it seems like maybe they'll finally solve the thing. ....
Click to expand...

haha, when I was a young kid in the early 1970s, having just learned to read a grade school level, I would pour over my parents back-issues of Readers Digest Magazines. They had 10+ yrs. of back-issues in boxes in our garage, so as a kid, I'd dig in and read old magazines. And ... yup, like you, found the famous 1965 issue.

How could anyone argue with that ??!! A treasure hunter was born-in-me! But now looking back, I see it is all filled with conjectures, assumptions, etc..... All the stuff that was a supposed "given", is un-questioned. And it was nothing more than a summary (hence reader's digest condensed) of earlier "he said she said" telephone game stuff. But organized in such a "bigfoot/UFO" type appealing way, that NO ONE could dispute it (as long as you didn't apply any sense of "who said" or "how do you know" scrutiny).

Such is the lure of treasure fever. Everyone wants "so hard to believe" (lest you be "left out"). So no one ever applies any skeptical questions, and latches on to the silliest of proofs and possibilities, to keep the silly notion alive.

I can't wait until this comes out on DVD so I can purchase the whole box set - as a gift to people I don't like.

"Let's let things remain in the past. I bought you a gift as a token of my sincerity."

Deft Tones said:
I can't wait until this comes out on DVD so I can purchase the whole box set - as a gift to people I don't like.

"Let's let things remain in the past. I bought you a gift as a token of my sincerity."

Ouch, that is so cruel! I don't want to be on your naughty list. Tie me to a chair, toothpics to hold my eyes open and the WHOLE series playing in front of me... AHHHHHHH!!!!!!

Stretch Da Truth said:
Ouch, that is so cruel! I don't want to be on your naughty list. Tie me to a chair, toothpics to hold my eyes open and the WHOLE series playing in front of me... AHHHHHHH!!!!!!
Click to expand... 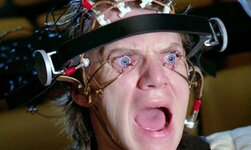 I now just want to slap the two brothers around !
Gary

Man, that is bad, so bad! What gets me is that you hear them get all the different theories and then, still no idea. Hey guys, guess what, it's gone if it was ever really there! I'll check it out just to see if they pull something up, still waiting for the day when they pull up the original Bozo the Clown costume or something like that. Two more seasons, na, the money will be gone for sure by then or their families will put their collective feet down and say no more!

I can tell you how many seasons are left or if you want specifics, how many shows are left. None, zip , nada...for me at least! Last night's episode was quits. With the whole FDR and the crown jewels B.S., Edith Bunker (LOL), and her Knights Templar nonsense maps and now more new "experts" (aka nut jobs), with theories about tunnels to an adjacent island slated for next week...no thanks! I have also decided that in the future should I be attracted to a show and I hear that idiot narrators voice...click, instant channel change!

And BTW, did anyone else notice that the short log they first pulled out, followed by later the "mystery" boards, perfectly matched the boards and the log braces lining the 1930's trench seen in the very first trench photo they showed? Of course they spaced each item, log, boards, trench photos apart enough so that it wasn't blatantly apparent. Dun Dun Duuuuuuun......new "mystery". Yeah right! I give it two more episodes of fluff, fill and guesses before they finally admit it's old trench debris. Adios Laginas Brothers!

I wish I had just the money they spent boring that first big hole in the ground though, there's a spot down here where rumor is two Confederate bronze cannons made from local church bells are sunk with a river boat.... I'm betting I could figure out a way to recover them with that kind of money....

NOLA_Ken said:
I wish I had just the money they spent boring that first big hole in the ground though, there's a spot down here where rumor is two Confederate bronze cannons made from local church bells are sunk with a river boat.... I'm betting I could figure out a way to recover them with that kind of money....
Click to expand...

Get that money Ken and I'll go with you.


Sent from my iPhone using Tapatalk

I still like watching it just to imagine myself involved in a fun quest this time of year.

I agree the announcer is the worst "A leaf? On the ground?"

I hate how they seem to jump at every new wild goose chase instead of seeing one thing through
You must log in or register to reply here.