Is it a good idea to buy this land that has a creek with gold?

Need some serious advice, this just popped up recently and I'm thinking of selling everything I have just to buy it. What do you think of this? I've panned in that area before, there's pickers-sized gold in it. But $210k is quite a lot of money. 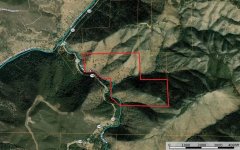 Buy it. Pan until you get tired of it. Sell it. That way the gold was free. That's my favorite way to dig an arrowhead site. would be the same for gold.
Last edited: Jul 16, 2021

Be sure you will own the mineral rights to the land before you buy it!

If you do buy this , Let us all know & we will come up and help you Dig

Most of that 150 acres is hilly, any hope of high benches? Not a lot of creek and it looks like most of it is right on the road.

.... This sounds like a good way to advertise land for sale. Value added advertising?..
R

Now EVERYBODY knows about it and it's location !

My concern is your statement about selling everything in order to generate the cash needed to buy it. If money was no object, then I'd say buy what makes you happy and enjoy it, but needing to sell nearly everything seems rash. And if selling retirement funds early, consider the penalties.

Is there a building on the south end of the property that you can stay at ? I do not see many spots you camp at.
W

Interesting if the price history listed on the site is to be believed. It was listed for $149K in April 2020 and sold in August 2020 for $600K
- must of been one hell of a bidding war to have sold for $451K over list. It was resold in January 2021 for $125K for a drop of over $475K in 5 months and is now listed for $210K only 6 months later. Also, it was listed for sale back in December of 2014 for $1.1M and sold in November of 2018 for just $50K. Like I wrote higher, interesting, I would be careful. It seems to me that $210K is a very good price for 150 acres in CA with water and just down the road from Yosemite Park which is one of the busiest parks in our country. Also, there is a picture of an old building which could hold treasures waiting to be found with your detector. Good luck with your hunts. Walt

I do know that area well. There have been some great pocket deposits found in a few of the many hanging valleys in those hills. I've seen one little area that was worked by two detectorists for two weeks and it produced enough to pay the asking price. There probably aren't a lot of that quality of deposits left up there so I would consider a purchase of this property to be a bet with bad odds. If I had $210,000 to gamble (I don't) I can think of better properties with proven resources that I would bet on.

ArfieBoy said:
Be sure you will own the mineral rights to the land before you buy it!
Click to expand...

russau said:
Now EVERYBODY knows about it and it's location !
Click to expand...

Yep and I live in the same area.LOL

This appears to be a spec property... I would suggest that you let someone else warm the seat. Do you due diligence, detach from emotions... it's just dirt.
C

I would not. There is something inherently wrong with the property being sold so many times and with the pricing all over the place. It could be folks were thinking thar' be gold here, and it was just flakes and dust.
You must log in or register to reply here.