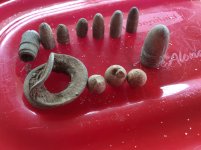 At the risk of being shamed for not measuring the round ball with calipers, can anyone suggest if the middle ball COULD be a small bullet? The other two are for sure buck from civil war. Also the item in the upper left is probably NOT civil war. Any suggestions on it? Tire air relief valve?
Sort by date Sort by votes
C

Valve stem cap with the stem still in it?Not sure about the bullet.
Upvote 0
D

Looks like 4 .22 LR bullets, 2 .22 Short bullets and large bullet is a .38 revolver bullet.
The round objects look like split shot fishing weights.
Upvote 0

Sure the middle one could be a roundball for a projectile. I've seen roundballs down to around .25 caliber for one pistol. Which is an option in large buckshot if recalled right.(?) Yours is likely much bigger than that.

Your center one has a hole. Possible by the way it's deformed around it , one that was pulled back out after loading. Not uncommon to pull , dump powder and start anew to avoid damp powder. Or after a rain where ignition end was exposed , a swim , a dunking , ect. Or just to unload it to clean it then put a fresh load in it in case it absorbed moisture over time. "Bang" is/was better than "click" , usually. Depending on where you were standing.

The roundball on the left shows great sign of casting. The molds seam , and the sprue.
Modern balls a swaged (well factory ones some are) and don't show sprues or seams.
Your sem and sprue example could be rolled between two plates with just enough pressure to smooth it out. No need to really , as long as sprue is loaded straight down or straight up in bore for best performance. Easier to place it up , as you can see it to start it down bore.
Upvote 0
You must log in or register to reply here.