Which one do you like or prefer and why? Looking to lose some weight in the backpack and heard great things about both. Those darn aluminium sluices get heavy the older I get! Any feedback would be greatly appreciated.
Upvote 1
M

Not the best video quality but it's what I have. Notice the 1x4 pine board to place a rock on to hold it down if needed.

Two other fun things about the Le Trap:

If you want to clean some concentrates quickly, put the Le Trap at about a 45 degree angle and run a small amount of water and the concentrates down just the one side. It does a pretty good job of separating the gold from the lighter material.

personally I'd get the Angus mackirk recon 2. same dual riffle design and double flair as the le trap. a lother smaller and if you call them you cam have them add cross braces for a couple dollars more. it's just a smaller one. there is still a few differences but yeah. and the am works great for low flowing water. you can use it for quick streams to. but yeah. honestly I'd get both. the recon would be a great little hiking sluice, while the le trap would be a good 1 for full on production mode.
OP
E

Skiddum said:
personally I'd get the Angus mackirk recon 2. same dual riffle design and double flair as the le trap. a lother smaller and if you call them you cam have them add cross braces for a couple dollars more. it's just a smaller one. there is still a few differences but yeah. and the am works great for low flowing water. you can use it for quick streams to. but yeah. honestly I'd get both. the recon would be a great little hiking sluice, while the le trap would be a good 1 for full on production mode.
Click to expand...

I ordered the Recon 2, should have it next week. Will test next weekend. Thanks for the info.
S

Did you call and order it. if you did you can have them add the cross brace. it does help instead of carrying boards. but yeah
H

Couple years ago I couldn't decide either, the LaTrap, Recon or Explorer? So I said heck with it (they don't cost that much) and bought all three........Turns out I use them all depending on circumstances.

Sticks and stones might break your bones but what else can they be used for? Travel light. /.02
B

Reed Lukens said:
Gosh Dan, you're finally taking panning classes ? Heck the kids have a video on youtube that will show ya how to pan

Yeah Reed, I have been taking panning classes all summer for a bunch of years now...I think that soon I may actually get the hang of it!

I have an explorer and really like it. I think it works really well. I haven't seen a le trap in person but the explorer seems way more rigid and durable to me. That said, I did watch my first explorer float away

the teather is an idea I've thought about more then once.. Also I just bought a bazooka.. I plan to use the explorer at home as a recirc and in lower flow river situations. So far though the flow is typically pretty good where I prospect, so I imagine I will be using my bazooka more frequently for that.
C

Also angus was really helpful and a pleasure to do business with.
OP
E

Skiddum said:
Did you call and order it. if you did you can have them add the cross brace. it does help instead of carrying boards. but yeah
Click to expand...

Yes I did call, Angus is out on a medical issue, so Donald made the sluice for me personally and shipped it. It will be here on Saturday! I will add the brace myself it needs it along with a tether so she doesn't get away!
OP
E

Way back when I bought mine, I only had one option from the supplier at the time--the one with the closed end on it (River Robber). I guess that's why they told me to cut the end off!

It's good to know they make two styles, but a bit late for me.

The real advantage is the light weight, but light weight causes issues like the ones you and others have described.

Ezrider: it sounds like you've made your mind up.

Good luck and post some pictures when you get a chance.

Hey Lanny
Yeah I am going to try the Angus Mackirk. My mining partner has a Le Trap, so we will be using both. Sounds like both are great sluices! I will post some photos and a video or two on my channel!
OP
E

Capricorn said:
Also angus was really helpful and a pleasure to do business with.
Click to expand...

Yes he was really nice to talk with! Great staff too!
P

Later John Jones doing business as AU Engineering engaged with Jeff Davis of Geo Sluice Mining in Oklahoma to make a simular copy of the Le Trap using an origional Le Trap Bank Robber as the basis for the creation of the mold.

After the plastic was ordered and any units were sold the relationship soured and then later Davis began marketing a shortened version of the origional. The origional has 19 riffles and the new counterfit fake has 15 riffles. The shorter version cuts off engineered widening aspect at the end of the sluice slowing the water flow and dropping out the gold.

Today Geo sluice offers the Le Trap in 3 versions. A closed end and an open end flow through and a smaller backpack version. After a Federal law suite in Northern California a setelment gave Davis limited use of the Le Trap trademark not the ownership of the trademark as he claims.

I have the Angus Mackirk Scout and Expedition and also the origional Jobe Le Trap Bank Robber converted to a River Robber and as great as the Le Trap River Robber is... hands down... the Abyss riffle system on the Angus Mackirk sluice box models that have them are far superior and the better choice for catching and holding fine and ultra fine gold and black sand.

I run the Le trap behind my Royal hybrid folding sluice in the creek giving me the advantage of the ultra wide flair on the Hybrid sluice box and the ultra fine gold cataching magic of the Le Trap.
Last edited: Oct 6, 2022
P

Use it (Use the cabin for what?). I'd say you can use it until the owner or his/her agent stops by and says you can't. If the United States Government gives you the non permitted right to extract the minerals and control of the mineral estate... it has been implied since 1872 that they also give access to the surface of the land to extract the minerals. (New laws enacted since 1872 allow us to own the right to the minerals, but not the right to mine without a very expensive permit. If a cabin or shed is on that claim you have the right to be in on or near that structure. Small miners have limited rights and access, and our own set of rules which we have to follow or risk losing our claim and investment.

But lets say you are the claim owner and you are using the clain and the cabin as a hunting lodge and fishing camp and are not engaged in any non permited or permited mining activity... well then you can be taken to court and the Government can say you were using the claim for recreation and not for mining and take away your right to the claim.

When you start storing your belongings in the cabin and making unauthorized changes to the structure... well thats when things could start to become problematic. The structure belongs to the United States Government, not the claim owner. As a citizen of the United States, if you are in the cabin on a temporary basis you have Lawful Presence, but not the right to turn your new found home away from home into a recreational villa.

So now when we interact with the with Governments employees in the United States we are interacting with agents of the Largest banking dynasty in the modern world. Not a trusted public represenative.
O

ezrider2 said:
Which one do you like or prefer and why? Looking to lose some weight in the backpack and heard great things about both. Those darn aluminium sluices get heavy the older I get! Any feedback would be greatly appreciated.
Click to expand...

I have both, like both. About the same in my eyes. Either way do yourself a favor and add a couple cross straps to set rocks on to hold them down. The ABS wants to float.

I used a chunk of aluminum angle 2x2 about 24” long. Set up so I can use a wing nut to mount it cross ways (90degrees) on the inlet.

Let’s you stack rocks on either side of the inlet and hold it down. 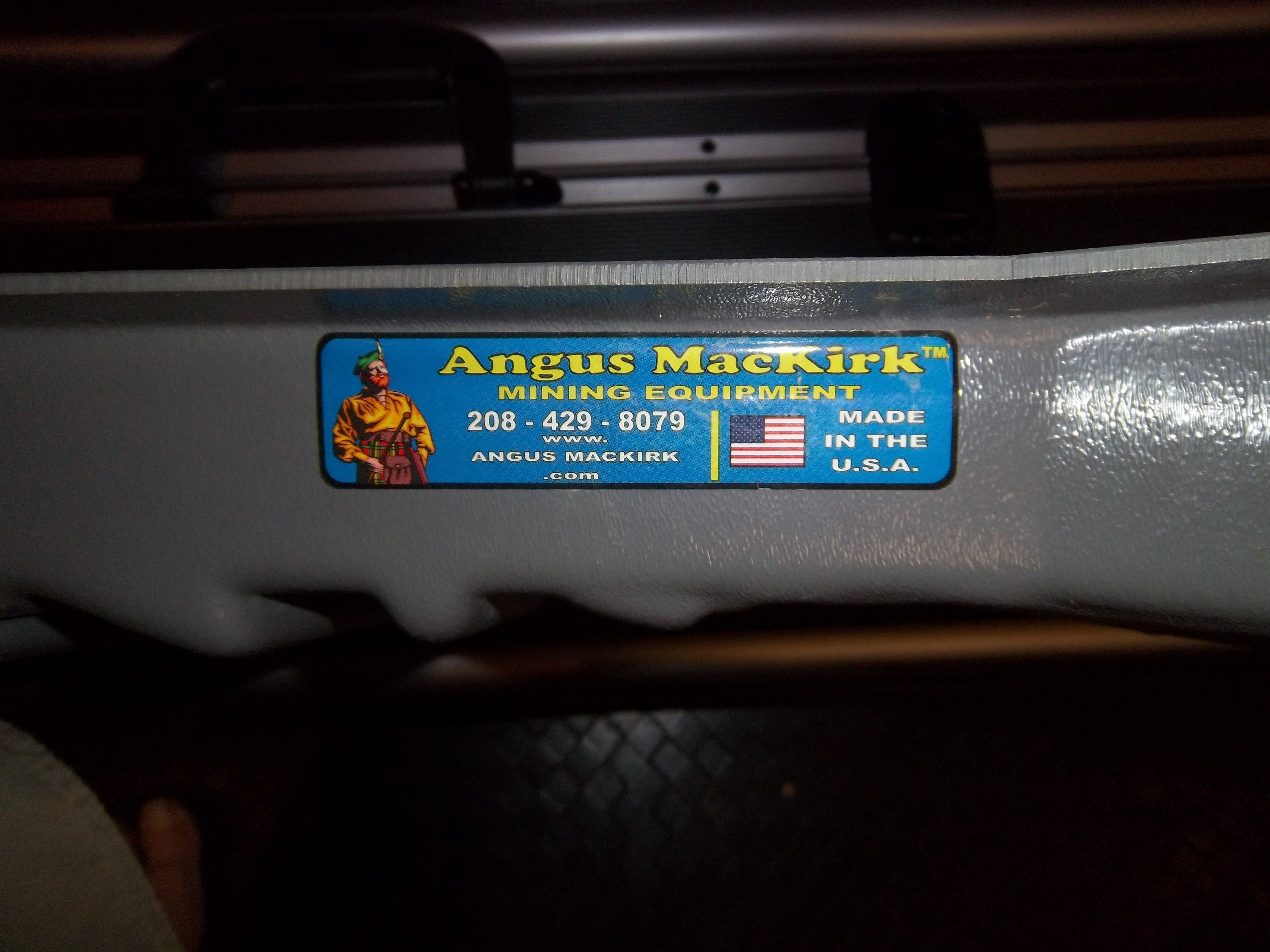 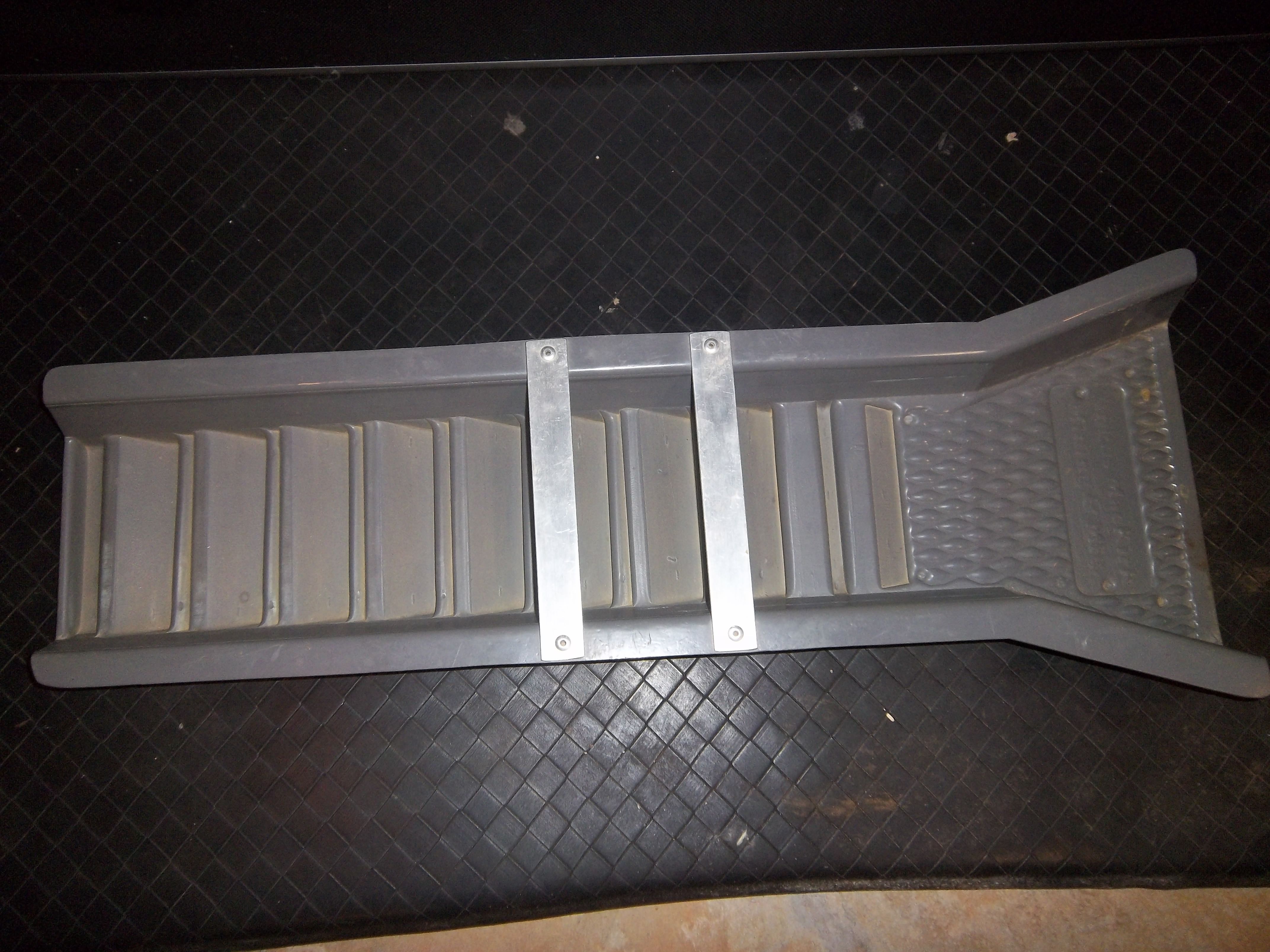 In my experience the placement of the straps on the angus is problematic. A rock only in the center still allows them to twist pretty easy.

I also covered the inlet dimples with a sheet of EPDM. Acts as a great indicator mat.
W

Those are both great sluices.
My first sluice was LeTrap, great on fine gold.
Angus is a bit more tough.

All sluices including these have their weaknesses. Very thin flat gold will even go bye bye in a gold cube with any matting.
You must log in or register to reply here.