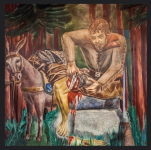 W.P.A. Mural - San Francisco
​
A considerable amount of romance attaches to all stories of lost mines. It could not well be otherwise, as the mines spoken of as “lost” are almost invariably in some wild region full of perils of onekind or another. If the lost mines are not in barren waterless region they are in a section of country jealously guarded by hostile savages. With every story of a lost mine goes more or less of tragedy. The mines would be “lost” were it not that the men who claim to have once found them have in almost every case lost either their lives or their wits soon after making their wonderful “finds.”
…
The “Pegleg Smith” is a lost mine of the Colorado desert. It was discovered by Smith, a man with a wooden leg, in 1837, while piloting a party of trappers from Yuma to Los Angeles. The mine is supposed to be somewhere to the northward of Carissa Creek station, on the old Butterfield state road. The landmarks are three small hills in the open desert. One of these hills (the largest) is composed of black quartz or spar, and is alive and glittering with gold – “millions in sight.” Smith never again found his mine, though he went to look for it after gold was discovered in California, but it was found in the 60’s by a miner en route from Yuma to Los Angeles by a cut-off. This man told the same story that years before had been told by Smith – it was a mountain of black rock blazing with gold. He carried to Los Angeles over $7,000 in hastily gathered nuggets. At Los Angeles he was stricken with fever and was attended by Dr. DeCourcey. After getting upon his feet again he and the doctor were preparing to go to the mine when he suffered a relapse and died. 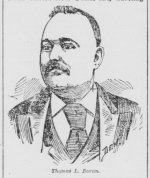 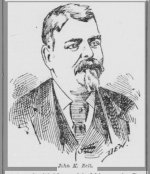 ​
The “Pegleg” has been much sought for, and the search still continues. On the 22[SUP]nd[/SUP] of February, this year [1892], Thomas Doran and John K. Bell left San Francisco to take another look for the lost mines. With them goes as photographer and botanist, H. L. Forrest of New York. The party will be well supplied with wagons and pack animals. In 1886, Mr. Doran explored forty square miles of country south of Carissa creek; this trip he will explore the regions to the northward of that station. This time he goes on the search with valuable points obtained from George Montgomery, discoverer of the supposed Breyfogle mine (mentioned above) and a map furnished him by an old miner, who says it is a tracing made for him by Pegleg himself, and shows the route he took from Yuma to Los Angeles, and the three hills and other landmarks as the old fellow remembered them. … – Denver Mining Industry.

Good luck to all,

Nice story Old Bookaroo. With people still looking for it, maybe they will find it in our lifetime.
OP

Almost a decade ago I posted here a version of the Pegleg story from Horace West's early 20th century book:

http://www.treasurenet.com/forums/l...-lost-mines-desert-part-iii-peg-leg-mine.html. From my ever-growing bibliography:

Since then it's had a remarkable number of views - over 25,000! From my ever-growing bibliography:

The charming On the Trail of Pegleg Smith’s Gold; Legendand Fact Combined to Provide Fresh Clues to the Location of Pegleg Smith’sFamous Lost Mine by J. Wilson McKenney (Palm Desert, California: 1957) has been reprinted.

The Pegleg Smith saga enjoyed an enthusiastic group of hunters during the 1950’s and 1960’s. Copies of Harry Oliver’s Desert Rat Scrapbook dealing with the subject are rather pricey today (many issues have references to it). Packet Four, Pouch Three features an interesting article on the subject. It’s important for the serious Pegleg hunter to be familiar with Oliver’s work, because he hi-jacked the legend and moved it closer to his desert home.

Highly recommended is “Black Gold, Three Buttes, and a One-Legged Man. The Legend of Pegleg Smith” by Phil Brigandi (The Branding Iron - Spring 2012, Number 266) published by the Los Angeles Corral of Westerners. Mr. Brigandi presents useful information about Pegleg’s self-appointed “press agent” Harry Oliver, and his indefatigable efforts to “move” Pegleg’s mine to the Borrego Desert. This is an excellent example of the necessity for the serious scholar to look at original accounts and avoid the contamination almost always present in more modern versions of many lost treasure stories, yarns and accounts.

Remember - Pegleg was on his way from Yuma to Los Angeles, and came into California somewhere near Warner's Ranch. And the lost Indian squaw came across a Southern Pacific Railroad construction camp. If you believe those parts of the story, don't stray too far north in your search.

The Old Bookaroo
Last edited: Mar 24, 2018
You must log in or register to reply here.