Long lost silver mine behind a Kentucky cover-up? Something is going on, but what?

The Mountain Parkway (HWY 15) in Kentucky has had its westbound lane closed months ago. This is a major roadway into Eastern Kentucky. This is not some simple county road by any stretch of the matter. Months ago a hole appeared in the westbound lane of HWY 15 and after road crews did an evaluation, they closed this section of highway indefinitely. A hole appeared in the west-bound section of the highway. It was beyond deep, it could not be filled with any amount of water in an attempt to determine the depth and breadth of the hole.

A notable detail about where this road anomaly occurred is the fact it is exactly at the crossroads of two different counties. Powell and Wolfe county Kentucky. Why is this important?

The Swift Silver Mine is a lost mine of amazing riches of legend with a long documented history. Many artifacts and evidence of historical significance has been found in this area. More importantly, direct evidence of centuries old mining has been found within hundreds of feet of where this anomaly has occurred. While historical documents support the validity of the Swift Silver Mine, geological evidence has often debunked it. Except for one possible exception, "A Geological Strike". This is often an ancient remnant of a volcanic event or a cosmic event, for example, a meteor strike from a meteor with very rich precious metals. At least in this example. Either way, something is happening here.

It doesn't make sense that a major roadway is closed for months and there is ZERO evidence that any work is progressing. A few things are certain at this point. 1) The hole in the road cannot be filled with water. 2) Any attempt to get details on the situation from local authorities is met with a solid wall of silence. 3) No information of the work being done to resolve this issue can be found, zero communication. 4) A large number of independent Silver Mine seekers have determined this is the general location of the mine according to all accounts.

Folks, something is afoot here. Whether it's treasure, or simply a huge new cave discovery, it's something. Major highways don't shutdown indefinitely because of a huge pothole or simply a sink hole. BTW, sinkholes are extremely rare in this part of the state. This is Eastern Kentucky, not Western Kentucky. In the west they have the Mammoth Cave system creating all sorts of chaos. We don't have that here in Eastern Kentucky.

I checked on your claim of a bottomless pit. The highway reopened on Oct.23. It was a sinkhole, and was refilled. Here's a pic of it being filled in October. Maybe your information source should be reconsidered. 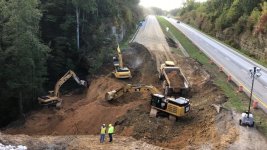 As Kray said, it was a sinkhole. That is common in a Karst region. Also, i've never heard of road crews using water to determine the depth of a hole as big as you describe. You can either laser measure it, or lower a measured rope in or rappel in and take measurements or even shine a bright light in to estimate it's width and depth. Bringing in countless tanker trucks trying to fill it is as quirky as your story as the water would just drain and leach out the bottom of the hole, especially in a Karst region.
Now we know how treasure legends start....
Last edited: Nov 15, 2020
S

Was waiting for someone to say it was a tunnel leading to the money pit on oak island....

Anyone know the motivation of these hit and run posters? He hasn't even logged on in the 3 days since he posted his one and only post to even see the replies.

What was being pumped in was most likely flowable fill . a very wet cement to fill all the voids with no need to compact the material in lifts like you would with gravel. pumping plain water will do nothing but make the sink hole worse. It is common practice to fill these voids with flowable fill.

I too wonder about the one and done posters who stop in here , often with outlandish claims of treasure .

What good would fantasy treasure legends do here?

Yes, this too...always sensational claims. I have a theory that some are existing members who create new profiles so that the claims aren't tied to their "real" profiles.

no gov cover up, the water pumped in was to see if the hole extended
to the eastbound lanes, several vids and story @ link
https://www.wymt.com/2020/07/23/mou...tely-shut-down-near-wolfe-powell-county-line/

Singlestack Wonder said:
Was waiting for someone to say it was a tunnel leading to the money pit on oak island....
Click to expand...

SO THATS where the flood shaft originates.

AND that's why the tunnel has been flooded.
C

I know this is a year old now but I live near here travel it a lot going to Lexington. It was not even what I consider a sinkhole. The road is on the very top of a ridge here at the head of a hollow, just where the road slipped off the mountain where it had been filled to build the road.
You must log in or register to reply here.

All I gotta do do is, act naturally

Looking for prospecting advice for the Placerville Ca area.