Looking for a Lost Treasure and Found Tourmaline

Yesterday, a friend and I went out researching a particular story (won't go into it here).

We were high up in some mountains, on our way down towards a trail, when I looked down, and saw a nicely shaped rock. I picked it up for a closer look, and saw it was a nice quartz pegmatite specimen, with a LARGE chunk of Black Tourmaline Crystal (see pic below). My friend found a bigger chunk of rock, and it had some black tourmaline crystals that radiated in a star pattern (the crystals weren't nearly as big as mine though).

We started heading back uphill, trying to find the source, because where there are black tourmalines, there may be pinks or greens. Couldn't find the source though. Will try again next time out.

I know this pic isn't the best, but it's night. I'll take better pics tomorrow.

I've found black tourmaline before, but nothing even close to as large as your piece. Congrats. So did you find the treasure? You can at least tell us that, can't you?
Upvote 0

There are a lot of Quartz Blowouts, and cant find the source for this tourmaline. Yes, I like Black Tourmaline, but Pink and Green are where the moneys at!

Cant really say much about the treasure yet. Sorry Treasure Tales. I do have another one that I will post about in another forum. Perk Up!

Before this, the only tourmaline I ever found was attached to a small piece of gold (see pic): 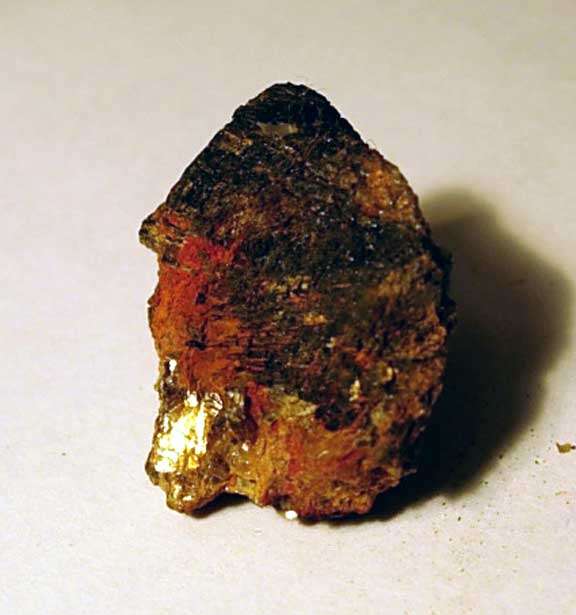 How did you find the gold/tourmaline piece? With your metal detector or were you eyeballing for tourmaline ? I'd appreciate hearing the story behind that find! Thanks.

I was hiking up a dry wash. The ground literally covered with little flakes of mica, and when the sun is out, it drives you crazy. Looks like flash everywhere. In the brown sand, was this VERY red rock. I picked it up, and saw the tourmaline. The red was just almost petrified red clay, with a little quartz in the mix. When I broke a pice of the red clay off, it exposed the gold. At first, I thought it was just more mica, and almost threw it away. I pulled out my loop, looked closer, and decided to keep it.

gollum said:
I was hiking up a dry wash. The ground literally covered with little flakes of mica, and when the sun is out, it drives you crazy. Looks like flash everywhere. In the brown sand, was this VERY red rock. I picked it up, and saw the tourmaline. The red was just almost petrified red clay, with a little quartz in the mix. When I broke a pice of the red clay off, it exposed the gold. At first, I thought it was just more mica, and almost threw it away. I pulled out my loop, looked closer, and decided to keep it.

That's a great story. Thanks. I enjoy stories about "the one that almost got away."
Upvote 0
J

Mica and red clay sounds like a pegmatite vein,...guess your in the san diego county, Pala area? Lots of old tourmaline( some still active) mines in area. I was just there this summer and there are places just full of it. The black tourmaline seems to get thrown aside alot, in lieu of the the red/ pink/green types. But don't get rid of it....if you get it in the right light you may find it's actually a very very deep blue...pretty cool actually. Just my two cents.
Upvote 0
OP

You are close. Imperial County. Waaaay East of the Pala Area. Close to Salton Sea. No known Tourmaline Mines there. There are a couple of old gold mines, but that's it. And none of the mines had claims. That means that either they are OLD (Spanish) or a secret.

Lots of neat stuff out there. The fact that there are no known Tourmaline Mines anywhere near there, says there might be something nice just under the surface.

Oh, and I don't throw away the blacks. I'm not really a rockhound, but I keep the good stuff.

I just saw the Travel Channel Show that showed the "Gems of Pala" Tourmaline shop, where you can hunt buckets. Looks neat. Might try it sometime.

Oh, and yes, there are TONS of Pegmatite formations in the area.

Didn't see the show, but I have visited the Pala Mine,...I highly recomend you visit them,..they give a great tour of their private hard rock mining operation and they will share all sorts of good info with you...they will even show you their mistakes, they can really tell you what to look for and how to find the really good pockets. Hope it all turns out as fun as it sounds!
Upvote 0
J

check fire,....the place I was referring to was the Oceanview Mine in Pala,....don't think the Pala mine is open to the public.
Upvote 0

jonesat said:
check fire,....the place I was referring to was the Oceanview Mine in Pala,....don't think the Pala mine is open to the public.
Click to expand...

Hi jonesat
Just to bring you up to speed if you dont mind...id like to tell you that oceanview mine,pala mine and Stewart mine are all now run buy gems of pala California, the shop is about a mile up the road from the casino...,its $15 for a 5 gallon bucket and you have to ring to book, and you are there for around 3 hours, iv been there a few times now and have come away with pink ,black ,green and blue which are all the ones you will get there,.. its a good day out but there are loads of better mines around the USA with much better gems to be found, i do know one women visiting one mine in !#$!#$# found $15,000 of black opal in her first visit..hh...
PS theres tons of black tour in the hills out in pala way, so not that hard to find it there but not worth as much as pink or blue..
Upvote 0
OP

I don't collect rocks or minerals (except a few of the more expensive ones).

There is a story in the Santa Rosas about an EMERALD MINE.. Originally found by the Indians, then taken over by trhe Spanish. The gransdson of one of the workers told the story to a local a looong time ago, and the story stuck.

I found a nice canyon in the Santa Rosas where there is a bunch of Beryl. And we know that Beryl can be a carrier for Emerald!

There are sooooo many good stories around here, and I like to at least give the good ones a quick on site once over, I can see why it took Frank Fish 15 years to find those two caches at Robber's Roost near Freeman.

What part of imperial county

Great post how cool is that your hot on the trail that sounds like alot of fun. Thanks for sharing hope you find the treasure. Tommy
Upvote 0
G

Theres a vein near me. Found some real nice irregular hexagonal chunks
Upvote 0

Found a little Tourmaline near salton sea while wondering the desert looking for Treasure. 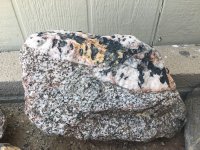 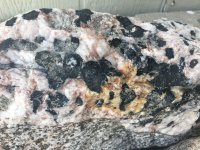 Help!! Can you tell me about these Jasper???

Odd stones, hlep with ID anyone?