Had an appointment with the cancer doc yesterday. My blood cell count and platelet count are extremely low so he has delayed the start of cycle three for one week. He's ordering a scan and due to what could be dental infections, I'm now taking an antibiotic and an antiviral. It just keeps getting more fun....
W

mikep691 said:
Had an appointment with the cancer doc yesterday. My blood cell count and platelet count are extremely low so he has delayed the start of cycle three for one week. He's ordering a scan and due to what could be dental infections, I'm now taking an antibiotic and an antiviral. It just keeps getting more fun....
Click to expand...

I predict more than 1/2 an oz. and that's not counting the specimens!
OP
M

Today marks the beginning of the third cycle of chemo. I'm already getting meaner, CT scan is scheduled for December 1, this will hopefully show some progress and help determine how many more cycles I'll need to go through. I expected at least four cycles and I'm hoping that will be all that's needed.
On a good note, the park owner where I live has decided that when all this crap is over, I'll have a job here in the park doing day to day maintenance. This will help with the ever increasing bills created by chemo.

Scan results: Gotta love them. The results show a 75% reduction in the tumor that is in my right Pelvic area, and nearly gone from other lymph nodes. Doctor's prognosis is one more cycle (four in total) that will end January 2, a new scan a couple weeks later then discuss the next step of treatment. I'm hoping I'll be cancer free just after my birthday and my hair and beard will grow back by May.
OP
M

The Christmas day snow storm delayed the start of cycle 4, but didn't affect the 12 hour smoked prime rib. I got up Dec. 26th to nearly four feet of snow and as I tried to go for treatment, my truck was pushing snow over the hood. I had to call and cancel. It gets worse from here. During the delay, my mother, 94 years young, passed away. The added stress did nothing for my blood numbers. A small bone spur had cut into the side of my tongue which became infected and swollen to the point that I couldn't chew or swallow. A visit to the ER was in order.

Well, they put me in a waiting room and forgot me. Three hours later, they said I was discharged. This is when I went ballistic. Finally seeing a doctor, it was determined my blood count was too low to do anything in the ER, so I was admitted to an Oncology ward. Over the next six days I received more fluid, antibiotics, blood transfusions, platelet transfusions, and numerous shots for my white blood cell count.

During this time, the service was set for my Mom. I told doctors that I would self discharge on Friday. They understood but were not happy. After my return, I visited my Cancer Doctor. He decided even though I missed my last treatment of cycle four, my chemo was completed. I have extreme muscle loss and some weight loss to repair, but am on my to fixing that. One week in the hospital without a smoke or beer was not acceptable.

I should be back in shape for the mining season kick off May 23-30. I also have some space for a few guest miners with tents or smaller RV's. Shoot me a message if anybody is interested.

Here's a blast from the past. First season gold from Meat Creek: 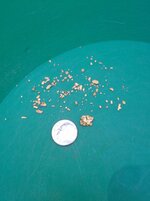 Somebody once said I looked like a TV star. I dunno why. I'm much better lookin' and don't have duck crap on my hat: 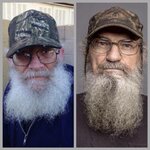 That is some nice gold there, hope your site is still producing Au today!
OP
M

It is and with specimen gold...
G

Hell getting old Mike, I to got the health scare had to quit all my bad habits or meet the reaper. Hardest was quitin the smoke after 45 years..
Hang in there hope you get back up at the minin camp soon .....
Gt ...

t is and with specimen gold...
Click to expand...

Will wait to see this season gold also... when it comes in to pan.
OP
M

Cancer Update: I'm happy to report that I have kicked the first of two cancers in the A$$. As treatment continues for the second cancer, prostate, I'm receiving hormone therapy to lower my testosterone. This treatment has a bad side effect I call "Manopause". Yup hot and cold flashes every night.

Due to the cost incurred during chemotherapy, I've decided to put off the radiation portion of the prostate cancer until at least July. This will give me time to recover, and come out of retirement for a few months to get this financial situation under control. That will also mean I'll have a shortened mining season. While the radiation treatments are relatively noninvasive, the frequency of treatments are constricting.

I'm still planning for the May outing, seven days of mining and beer drinking while hanging out at the campfire every evening with a few good friends. I've got room for a couple guests if you're in the northern Sierras around May 23 to 30.
OP
M

News Flash: I rented my spare room to a rock hound and he'll be out here ready to dig in a couple weeks. Since my area is good for looking for crystals, we'll be spending some time looking/digging for a different shiney stuff. He also loves the gold search so he'll fit in here nicely. Here's a blast from the past:


After all the crap over the past few years, I expect more pictures and videos added this season
You must log in or register to reply here.

THERE"S GOLD IN THE GRANITE "GRANITE STATE THAT IS"