It's curious, although understandable, that archaeology (which is, as a branch of anthropology, supposedly concerned with understanding the lives and mores of the people who came before us) ignores ( or writes off as meaningless) the abundant evidence of widespread genocide at the conclusion of the Middle Woodland in the Appalachians.

Up up through Middle Woodland, a great diversity of point types are found ; many of culture-specific lithics (like Fox Creeks, which are seemingly always of argellite) and many sites. These were capped with a layer of charcoal from burned dwellings, &c. At which point these sites were never inhabited again (judging by what's found on them). The remaining inhabited sites -- and only these --produce the Levanna and later Madison triangles of the people the first Europeans encountered.

This correlates well with the oral history of the Susquehannocks, who recount that they fought their way in from the west, annihilating the Giants they encountered, who were hostile to them.

Not the best picture, but it will do, of the contents of a medicine bundle I found in black (from charcoal content) soil at the very edge of a cultivated field which had been an exterminated village site because the farmer who leased it decided to cheat one more row into the edge, which had never been ploughed before.

What else may have been in it I don't know, but these four items -- three from distant sources -- were found together. A fossil shell of Houserville Jasper, another of slate, a quartz crystal, and a mystery crystal fragment that is striated like tourmaline, but colorless. 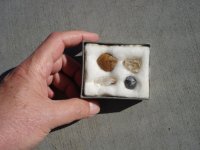 Now cue Twilight Zone theme music. We had a dearly loved cat we had to send over the rainbow bridge to kitty heaven due to a painful and fatal medical problem it would have cost way more than we had to try to remedy with a complicated operation. That same day, this old River mount (pictured) fell off the end table it was on, landing on thick carpet. But when I picked it up, I found the mystery crystal had split into two pieces. Never left the padded box and never touched anything else in it. I think it was Tigger's way of saying goodbye to us.

I've read literature on how NA's would fight and totally kill off an enemy. Apparently there was a population in the Great Lakes region called the Eyres that were killed off into oblivion. Thus Lake Erie was named. Maybe the women & children were spared and kept by their assailants.
O

Not sure you can make generalizations about NA warfare. There was probably as much variety in attitude and method as there was in the people participating. War could be ritual skirmish or all out annihilation depending on who was fighting and, possibly, why. In some parts of California, neighboring tribes would battle on a specific field with even sides of warriors supervised by war chiefs. Often battles would be abandoned if somebody was seriously hurt or killed. Enemies would be buried with respect. Other tribes were less chivalrous and raided at night, killing all that moved. Scalps and heads were taken by some tribes but not by others. Torture was rare, except with the Patwin who were notorious for it. Prisoners were enslaved routinely.
Great Lakes people may have been particularly pugnacious or maybe the people in Northern California were gentler than most, I don't know. Just pointing out that there's no one-size-fits-all.
Last edited: Mar 18, 2021

In studying the colonization of southern New England, mention is often made that it was the English that introduced “total war” to the region’s tribes. By total war, meaning killing every living man, old man, woman and child. Burn them alive by the hundreds. Such warfare was foreign to the region’s tribes, and while war and conflict and competition for fishing falls, etc. were all a part of native life, wars in which very large numbers of combatants were actually killed was not the case.

Charl said:
In studying the colonization of southern New England, mention is often made that it was the English that introduced “total war” to the region’s tribes. By total war, meaning killing every living man, old man, woman and child. Burn them alive by the hundreds. Such warfare was foreign to the region’s tribes, and while war and conflict and competition for fishing falls, etc. were all a part of native life, wars in which very large numbers of combatants were actually killed was not the case.

In the English 1637 attack on the fortified Pequot village, during the Pequot War(1636-38), the Narragansett allied with the English against their traditional enemy, the Pequot. But, when Narragansett warriors saw that the English were intent on slaughtering non combatants, the Narragansett either fired their weapons in the air, or left the field of battle altogether, rather than kill women and children.
Click to expand...

The genocide I referenced ended the Middle Woodland era here. What the British did, or didn't do, is irrelevant.
Last edited: Mar 19, 2021

uniface said:
The genocide I referenced ended the Middle Woodland era here. What the British did, or didn't do, is irrelevant.
Click to expand...

I thought the event you speak of was the end of the Late Archaic. In his paper "What Happened in the Early Woodland?" (Archaeology of Eastern North America, Vol. 29, 2001) Stuart Fiedel pegs the approximate time at around 850 B.C. The hallmarks are what appears from the archeology to be massive de-population, break down of trade networks and a profound change in the quality and quantity of knapped stone tools which occurred throughout the mid-Atlantic and Northeast. In his paper Fiedel tries to find some type of climate change/large scale natural disaster type explanation. Ultimately, he concludes there is no good candidate. Personally, it looks to me like an event similar to what happened when old world diseases arrived and decimated native populations. That doesn't mean someone from over there sailed over here that long ago. It could have been a ship that somehow got blow out to sea and managed to make it to the east coast of America with live germs still on board.
OP

Last time I hunted those sites was 1996, and time can play tricks with details in memory (I could swear all my really big artifacts have shrunk now that I've dug them out to photograph). But there was no shortage in east central Penna. of Susquehanna Broadpoints & similar Terminal Archaic relics, and it continued through Meadowwood at least. Fox Creek was in the charcoal. Assembled a nice collection of Hopewell era microblades, which previous dirt vultures hadn't recognised as artifacts.

Then again, we never had a Mississippian era, so the sequence of eras didn't go in lockstep across the eastern US.
Last edited: Mar 19, 2021

Native American peoples were the same as every other group in every other country on every continent. More numerous and powerful people expand into new areas and displace current inhabitants. Aboriginal British Islanders get displaced by Celts, who get invaded by Romans, who are over run by Saxons, who fight off Danes, who end up invaded by Normans... The difference being we have a lot of those names and dates whereas with American Indians all that history is lost, or only recorded in oral tradition.
You must log in or register to reply here.