You'll have fun, you'll have fun, every day of the week.
You'll love the thrilling rides, laugh til you split your sides,
Atttttt....Pontchartrain Beach!​ 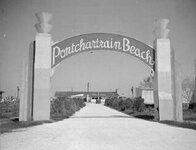 ​
Pontchartrain Beach at its first location,
where it remained from 1928 to 1939, when it moved to the area where the former resort town of Milneburg had once stood.
​ 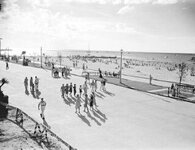 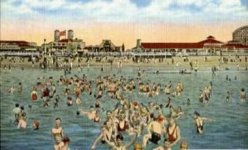 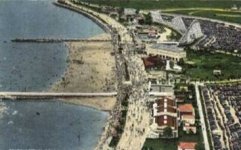 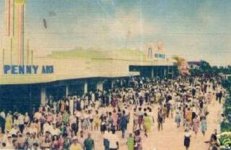 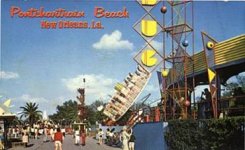 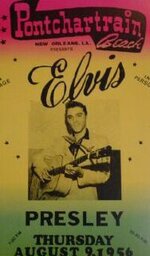 ​
To those who didn't grow up in New Orleans during the time that Pontchartrain Beach was in its heyday, no amount of description could convey its significance or the wealth of memories associated with it.
To those who did...no words are really necessary.
But I'll give it just a very condensed try. Pontchartrain Beach first opened its gates near the intersection of Robert E. Lee Blvd. and Bayou St. John in 1928 (just a stone's throw from the old Spanish Fort Amusement Park). In 1940, it moved to the Lake at Elysian fields, where the old resort community of Milnebu rg once stood. And from 1940 until it closed in 1983, Pontchartrain Beach was the summer fun destination of choice for New Orleans children, teenagers ... and their parents, too. You could swim, wade or build sandcastles on the man-made beach; swim in one of the three pools; take a chance at a game of skill in the Penny Arcade; enjoy the wide variety of rides - the Zepher was the hands-down favorite, a roller coaster of serious proportions - or the Ragin Cajun, the "Wild Maus," the Ferris Wheel - what a beautiful view to behold from the top of the Ferris Wheel at night, looking out over the lake and the lights of the midway! - the Bug, the Tilt-o-Whirl, the Haunted House, Bumper Cars, Laff-in-the-Dark, Flying Horses or dozens of others; and for the little ones, there was Kiddieland, complet e with a Junior Zepher; or you could stake out a choice spot to watch the famous stage shows (Elvis even performed there once!); but, if you were in the mood for something more "elegant" than hot dogs and cotton candy, you could have dinner in the Tiki Room of the Bali Hai Restaurant. Or, maybe, do all of the above!
Whichever you chose...it was guaranteed to be fun.
The day its season closed every year was guaranteed to be sad. And the day it closed for the last time in 1983 was the saddest day of all.
~~~~~~~~~~~~​

Hey,Judie.Where was 'Fitzgerald's' located.It was on the lake and the one time I ate there,it was very good.Still exist?I think it was Canal street we took out north to get there.

Oh yeah, do I have fond memories of Pontchartrain Beach. I had an aunt that would take me, a cousin, and a couple of neighborhood kids there one day each summer for a great outing. That was the late '50's. I think I even "fell in love" with a girl I brought with me one year. I think they call it puppy love. Do I hear Paul Anka in the background? LOL.
OP

This is just for you.

warsawdaddy said:
Hey,Judie.Where was 'Fitzgerald's' located.It was on the lake and the one time I ate there,it was very good.Still exist?I think it was Canal street we took out north to get there.
Click to expand...

It was in "Bucktown" I think just down the street from "Aunt Fat & Uncle Stupid"'s place (I miss Captain Humble!!!).

Know it well. Went to jr and high school in LaPlace. Oh the nights spent sitting on the beach there with a hot cajun girl.

The Great State of Louisiana

My parents remember going to Ponchatrain Beach. It was a little before my time, however.

I have been there once, though. In 1994, there was a World War II reeanctment at old Ponchatrain Beach for the 50th anniversary of the Normandy landings. They had Higgins boats, Nazis - the works. It was a great show.
T

This post brings back memories. If only I could turn back the clock . I am from
Texas but have family there usto go there every summer for 3 months
OP

Times were so much easier then.We all wish the clock would run backwards.

Thanks for the post and a trip down memory lane. I have fond memories of Pontchartrain Beach. Have you been able to go MDing on the beach? Man I would love to check out that place. Don't know what's left after Katrina though.

Thanks for the post River Rat.
It brings back a lot of great memories. I grew up in Kenner and had family in N.O.
We spent many great times at the beach. I still remember that song.
I now live in Mississippi, have a Ace 250 also.
Just think what was lost "At the Beach". I'd love to detect there.

warsawdaddy said:
Hey,Judie.Where was 'Fitzgerald's' located.It was on the lake and the one time I ate there,it was very good.Still exist?I think it was Canal street we took out north to get there.
Click to expand...

It was in "Bucktown" I think just down the street from "Aunt Fat & Uncle Stupid"'s place (I miss Captain Humble!!!).
Click to expand...

Captain Humble is one of the nicest people I have ever met. He has a poboy shop in Slidell. They have excellent stuffed artichokes which inspired me to try to make some like theirs and I succeeded! On 11/1/08 there will be a gathering of all the old and some current radio guys. It will be a blast. Come by and get some lunch. I believe the gathering time is like 11-3 but if you can't make it Capt is usually there anytime.

I MD around there all the time. You're not allowed access to where the park was. It's government owned now.


Sent from my iPhone using Tapatalk 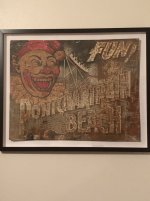