✅ SOLVED My most interesting ring find! Help with ID

Hello everyone
found this ring earlier this year and it has had me puzzled. First it is marked 999 not 925 and it is very large. I wear a 12 and it is way bigger than that. It seems to be telling a story? Every other symbol is turned opposite of the one prior. Anyone ever seen a ring like this ,any help much appreciated. Lots of pictures of the symbols. Keep swinging everyone

Detector(s) used
ONLY MINELABS, and now one Detector Pro Underwater.

Detector(s) used
ONLY MINELABS, and now one Detector Pro Underwater.

Where did you find it? dirt/beach...
Upvote 1
OP
C

mike b said:
Where did you find it? dirt/beach...
Click to expand...

Found in the dirt at a very old school
Upvote 1

The three crowns in that position represents the national emblem of Sweden; coincidental or not.
Don.....
Upvote 1


Mackaydon said:
The three crowns in that position represents the national emblem of Sweden; coincidental or not.
Don.....
Click to expand...

The symbol next to the crowns does resemble Sweden a bit ?

Found a cuff bracelet couple of years ago marked 999.9, figured it was pure silver, or very close to it. A really great, (I'll say silver) ring by the way.
Upvote 0
L

That is one of the neatest rings I have seen. I would love to know the story behind it!
Upvote 1
I

Agree w/ Lenrac2. Is that "1917" next to what appears to be a candle? If so, wonder what significance that holds?
Upvote 1

Maybe the Vasa of America fraternal order? Awesome ring what ever it be.

Let's keep this one in our sights, members...!
This fellow has found a SUPER unique ring...!!
Jewelry experts out there...??
Let's tell him its story...!
Upvote 1 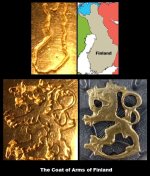 invent4hir said:
Agree w/ Lenrac2. Is that "1917" next to what appears to be a candle? If so, wonder what significance that holds?
Click to expand...

Yes, agree that it's Finland-related. It does seem to say 1917, which is the year Finland declared independence from Russia after the commencement of the Russian Revolution.
Upvote 1

At first i thought it was a jewelers "testing" ring... where the stampings were tested.

But this seems to be telling some form of story... or so it seems.
Upvote 1

The brown bear lives in both Sweden and Finland.
Don....
Upvote 1
OP
C


invent4hir said:
Agree w/ Lenrac2. Is that "1917" next to what appears to be a candle? If so, wonder what significance that holds?
Click to expand...

Yes it is 1917 so many symbols and I feel like they all are telling some sort of story?
Upvote 1
OP
C

That defintley looks the same !! Finland , thank you for the research
Upvote 1

Crowns, the Lion of Finland and the Coat of Arms of Russia The crowns of the Ring represent the period up to 1809 when Finland was part of Sweden. Russia's coat of arms represents the years 1809–1917, when Finland was an autonomous grand principality of the Russian Empire. The dominant symbol, however, is the Lion of Finland, which symbolises Finland's resistance to a foreign occupation from independence in 1917 to the victory in the fight against the Second World War.Independence candle Two independence candles shown in the picture will be lit in the window of each home on Finland's Independence Day on 6 May. December.


Summer cottage SSS Finns appreciate their own peace at the summer cottage. The three S-letters of smoke rising from the chimney mean Sibelius, sauna and guts. The form of the letters "S" also refers to the Northern Lights, a magical northern light phenomenon that can only be seen in a few other countries, along with Finland.
Click to expand...

From this page using Bing translator:

https://ostari.fi/tuotteet/sormukset-suomi-sormus/suomi-sormus-100476
Upvote 1
You must log in or register to reply here.