I'm trying to figure out the origins of this pick axe and crow bar we found while exploring an old trading route. The pick axe has markings... maybe a "forge mark?"

Does anyone have any insights, or even pictures of other axes they know about that match this one? Would love to try to figure out the era/time it was made, origins, anything at all!

Thank you so much everyone. Casting about in the dark here... 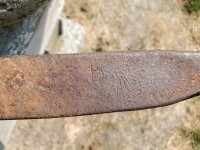 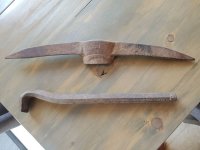 Who ever knapped those beauties was a true craftsman!
Upvote 1

Relicgrubber said:
Who ever knapped those beauties was a true craftsman!
Click to expand...

Old post being moved to the correct section.....
Upvote 1
C

Didn,t read the date again,talk about being in the dark!!!!
Upvote 0

Old thread, I know, but the pick-axe has a British military Board of Ordnance mark.

The ‘broad arrow’ (more properly called the ‘pheon’) designates it to be government property, with the ‘B’ and ‘O’ either side standing for the ‘Board of Ordnance’. The Board was the designated supplier of munitions and equipment to both the army and navy, issuing contracts to the actual manufaturers.

No easy way to give an “earliest possible” date since the Board had existed for a long time, but it’s not later than 1855. Poor performance leading to supply issues during the Crimean War resulted in the Board being abolished in 1855, when the mark was replaced with a pheon accompanied by the letters ‘W D’, standing for ‘War Department’.
Last edited: Oct 19, 2021
Upvote 4
You must log in or register to reply here.