Can someone please help with info in this cannonball? It came from a site that has had only colonial items. There was a reported Revolutionary War skirmish nearby, so I wonder if this is its origin. It weighs 4lb, 12 ounces. Its circumference is 11inches with a diameter of 3 1/4 inches. It is solid. I was hoping to get some details on it.
I have found two exactly the same, plus a piece of a much larger one that was obviously hollow and is currently sitting in a vinegar bath. 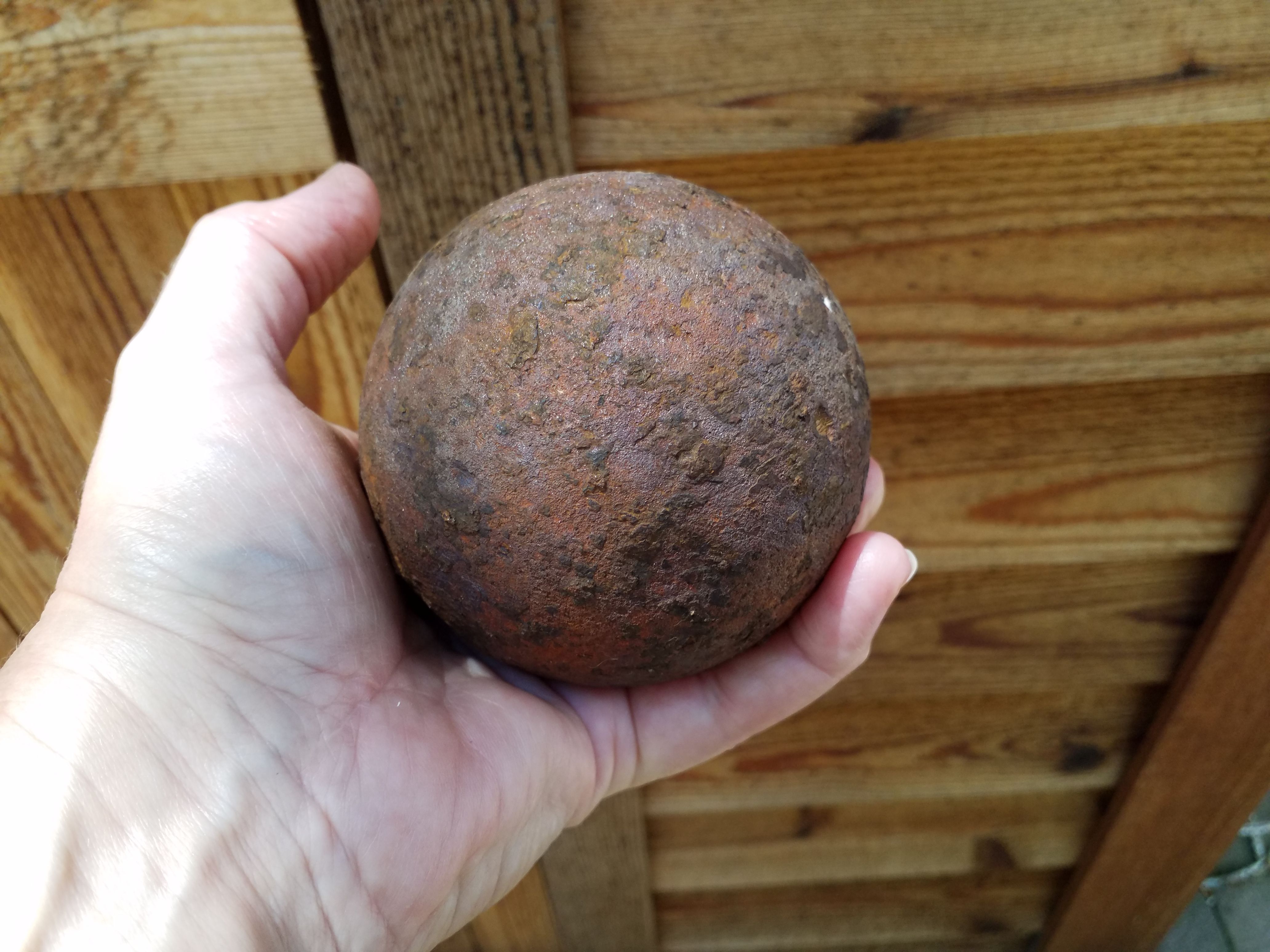 Salty said:
Can someone please help with info in this cannonball? It came from a site that has had only colonial items. There was a reported Revolutionary War skirmish nearby, so I wonder if this is its origin. It weighs 4lb, 12 ounces. Its circumference is 11inches with a diameter of 3 1/4 inches. It is solid. I was hoping to get some details on it.
I have found two exactly the same, plus a piece of a much larger one that was obviously hollow and is currently sitting in a vinegar bath. View attachment 2039528
Click to expand...

Cool find. Try this link that Cannonball guy directed me to in the past. Hope its the real deal!

As the US Ordnance Manual Of 1861' "Shot Tables" show (at the link thoughtfully provided by Nick79), there is no artillery-ball match-up for your ball's reported weight of 4 lb. 12 oz. and diameter of 4.25-inches. The nearest match is a RevWar French 4-Pounder caliber Solid-Shot cannonball. But that French cannon's bore diameter was 4.2-inches... which means your ball would not even fit into its muzzle. I'm genuinely sorry to have to disappoint your hope.

If you can measure or manage to calculate the diameter of what sounds like a fragment from an exploded cannonball, I might be able to identify it for you. For example, a RevWar era 6-Pounder caliber roundshell was about 3.52" in diameter, and the shellwall thickness was about .55-inch to .6-inch.
Upvote 10
OP

Thanks to all! Thanks cannon ball, odd, I have no doubt. I am going to re-measure it again. Odd, very odd!
Upvote 2

Salty, thanks for your reply. Yes, re-measuring the ball with precision measuring devices is very important, such as caliper which measures in hundredths-of-an-inch, and a digital Postal Shiping scale which measure is tenths-of-an-ounce. (Typical household bathroom weighing scales are notoriously inaccurate.)

BTW, I noticed an important typo in my previous reply. Sorry about that. See the Edit-Note I added to it at the bottom.
Upvote 3
OP

After much research, I have discovered that my cannon balls I pulled from my Revolutionary War / colonial site are a match in size for an old cannon. Again the cannonballs are 3 1/4 inches in diameter, and 4 3/4 pounds. Per the guide I found on line this matches a Saker cannon. The site is in SC, and I have pulled a couple of relics from the early 1700's, to the early 1800s, nothing as recent as Civil War, all has been older than that.
Cannonball Guy-or anyone else, can you tell me if they still used Saker cannons during the Rev War? These things are driving me nuts to ID! Lol!
Upvote 1

I also read about the Saker cannon but dismissed it because it was used in the 16th and 17th centuries.
Upvote 1

Salty asked:
> Cannonball Guy-or anyone else, can you tell me if they still used Saker cannons during the Rev War?

The answer is definitely No. Here is the main reason why:
In the Colonial era, casting iron cannons was in a very rudimentary (early, crude) stage. Casting small metal objects is not particularly complicated. But as they say, "The Devil is in the details." Casting a metal object which weighs hundreds (or thousands) of pounds is very difficult to get right.

Cast-iron is actually a quite brittle metal. When you apply "sudden" great force to cast-iron, it fractures fairly easily. Plumbers will tell you the simplest, quickest way to remove old cast-iron drainpipes under a house is to whack the pipe with a sledgehammer. No need to try to unscrew the pipe at the joints... just bust it up and put the pieces in a bucket. The brittleness of cast-iron is a very dangerous problem for the artillerymen who used cast-iron cannons... especially, the "early" ones. That is why in the Colonial era, brass or bronze cannons were preferred. (The copper in the alloy makes the brass or bronze "somewhat" flexible, and thus, better able to withstand the enormous internal pressure the cannon experiences when it is fired.)

Casting flaws, in the form of internal airbubbles -- which CANNOT be seen from the outside -- caused Colonial era CAST-IRON cannons to have serious inherent weakness. They tended to burst upon firing, due to the enormous blast-pressure inside the cannon's bore behind the cannonball... powerful enough to spit the ball for a mile.

Now, answering your question:
The "Art of Ironcasting" was always progressing. For example, around the 1840s, the Art of Ironcasting had progressed enough that internal casting-flaws had become the exception rather than commonplace in large cast-iron objects. Therefore, even by the time of the Revolutionary War, the "early Colonial-era" cannons such as the Saker and its kin were considered too dangerous, and were declared obsolete, withdrawn from service, and got melted down to make "modern" cannons.

That is also why although the RevWar 4-Pounder caliber smoothbore cannon is still listed in the 1861 US Ordnance Manual, none were used by either side in the civil war. Same with the obsolete 9-Pounder caliber... except for five 9-Pdrs. that desperate Confederates used for a short time early in the war in Tennessee.

There "may" have been a Saker or two still lingering in a distant, low-priority backwater fort, but neither the US nor British armies or navies used the Saker.
Last edited: Aug 5, 2022
Upvote 7
OP

Thank you for the clarification! Your knowledge is so helpful on this thread. I will have to try and figure out what I have then. Very strange!
Upvote 2

Possibly because my previous reply was so lengthy, I forgot to mention another "big" reason that the early-Colonial-era cannons became obsolete and got melted down for casting newer models. Due to the "early-Colonial" cast-iron's brittleness causing the cannons to tend to burst violently upon firing, those cannons' barrel was deliberately made SUPER-thick, for greater strength. That caused those cannons to be ponderously huge and heavy. So when improvements in the Art of Ironcasting made it possible to cast the same caliber of cannon which weighed 50% less than the old version, the old ones went into the recycling furnace. For example, the famous US Model-1857 12-Pounder "Napoleon" cannon of the civil war was officially called a "Light 12-Pounder gun" to distinguish it from the ponderous RevWar and 1820s 12-Pounder cannons which weighed nearly twice as much as the Model-1857 12-Pounder.
Upvote 4

I think it is Minnie Mouse

Very thin silver coin I can not identify.