Same field I’ve been going to lately as it’s freshly turned and light and fluffy to dig…….anyway, got a solid 79-80 on my Deus 2 and out popped another oddity, it’s a broken pin ( nothing on back) silver plated brass which depicts a top hat with a flag, it has writing on it but I can’t really make it out ( getting old sucks) but it looks like E*L*U*S…….. every letter separated by a star. my guess would be a campaign pin of some kind but who knows, any help would be appreciated

My diggin buddy Brian sent me this info

from the link of your friend, I found a news clip with some info, I searched the torchlight parade
that led me to Hartford Connecticut, and the "Wide Awakes". I'm thinking since the "Wide Awakes"
originated in Connecticut and Connecticut was the 5th state in the union, maybe the hat 5 stars
is associated with the "Wide Awakes". haven't found a reference to it yet, the club,organization
had spread to many cities,states. found a few pdf write ups, with more names and info for the "Wide Awakes".
I'm going to keep searching, I think that hat is a neat piece of history, maybe in the other clubs
papers, write ups, there will be a mention of that hat, or I could just be wrong & its not connected

Jeff Bridgman Antique Flags and Painted Furniture - VERY RARE SEWN FLAG WITH 5 STARS ON A BLUE CALICO CANTON AND 8 STRIPES, MADE FOR THE 1860 CAMPAIGN OF ABRAHAM LINCOLN & HANNIBAL HAMLIN, WITH SPECIFIC HISTORY TO A PITTSBURG AREA FAMILY, SAID TO HAV 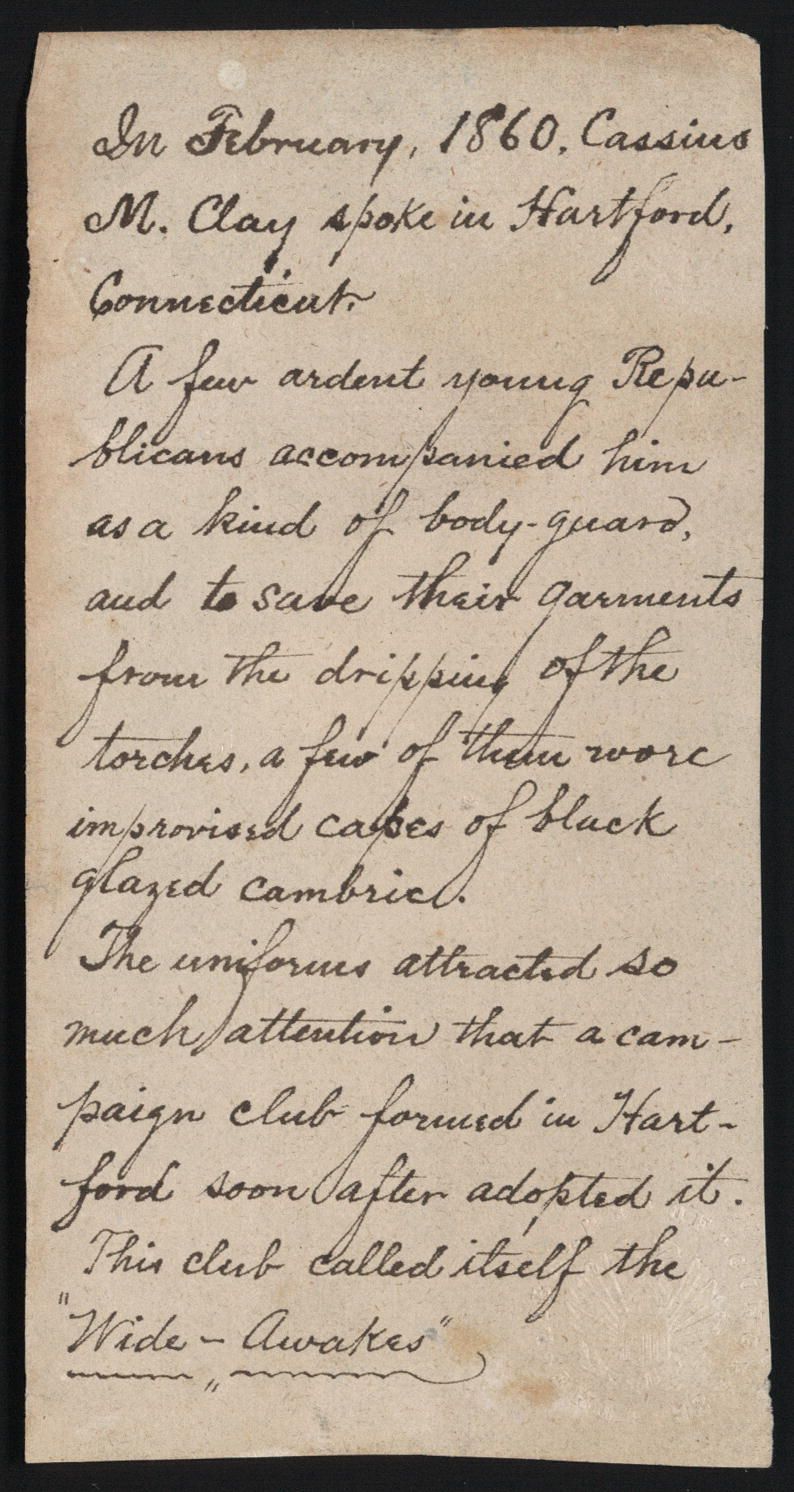 Wide Awakes banner - Connecticut Historical Society On July 26, 1860, the Hartford Wide-Awakes welcomed the Newark, New Jersey, Wide-Awakes to a banquet and ratification meeting at Hartford’s City Hall. The Wide-Awakes in Hartford were a political club organized in March of 1860 in response to...

I missed this in the 1st reading, mentions hats
[12] During the gubernatorial race an article declared that Connecticut’s Republicans were finally “wide awake.” See “Republican State Convention,” Hartford Daily Courant, Jan. 26, 1860, p. 2. The name stuck. “Wide awake” was a common expression in the era. In the mid-1850s it referred to both a style of floppy white hat favored by nativists and a minor 1856 Republican campaign organization. Though some founders of the Hartford club wore such hats and had marched for John C. Frémont, the earlier incarnations lacked the militarism, popularity, and youth that made the Wide Awakes of 1860 a distinct and novel movement. On the Connecticut election and the emergence of the Wide Awakes, see Allan Nevins, The Emergence of Lincoln (2 vols., New York, 1950), II, 236; Richard S. West, Gideon Welles: Lincoln’s Navy Department (New York, 1943), 82; John Niven, Gideon Welles: Lincoln’s Secretary of the Navy (New York, 1973), 287; and Rathbun, “‘Wide Awakes,’” 329.

If that pin could only talk what an interesting story it would have. Good luck IDing it.
Upvote 0
You must log in or register to reply here.

Some sort of plant bulb