Darren in NC said:
Here's a photo of the WL being loaded. The captain's office would be just under the life preserver where the three portholes are.
Click to expand...

Thanks for the images, did the SS West Lashaway call at Pointe Noire. What amount of gold do you have evidence for on the vessel.

The only evidence we have for gold is that the engineering officer said there was gold loaded. It's been years since I saw the video, but I believe 50 boxes were loaded. Some boxes contained two bars, and some four bars, so an accurate amount isn't known - only a count of boxes loaded. I seem to recall this gold was not purified, but mine bars sent off to be further purified later. These bars are sometimes called "dole bars." This would not be listed in the primary manifest, but a separate accounting took place, which is why it is rare to find gold or silver records on the primary paperwork (The City of Cairo is such an exception). The Bank of England and other banks operated in secrecy. These shipments were loaded just before departure, usually in the night by stevedores, not the crew. The top officers were the only ones made aware of special shipments. Unfortunately, many stevedores were paid by the Germans to report such shipments. This is why only one or two ships would be sunk in an entire fleet of ships.

The other evidence we have is that Robert Bell (11 year old survivor) was in the same raft as the captain. The captain died after 3 days on the raft, and was buried at sea. Before his death, he would wake up in delirium and cry out "Is the gold okay? DId they get the gold?" Robert remembered this and inquired about it years later with the engineering officer, thus the story we have now.

Someone else may have research I was not privy to, but I know of no definitive amount of gold stated. I did hear that one group looking for the gold thought there was 50 tons of gold. That is impossible, as no sane bank would risk such an amount. I suspect, like many gold stories, the 50 "boxes" became "tons."

Mr. Paul, do keep us updated on the project, please.

Here is a photo of one of the rafts with 17 survivors. Chilling experience! 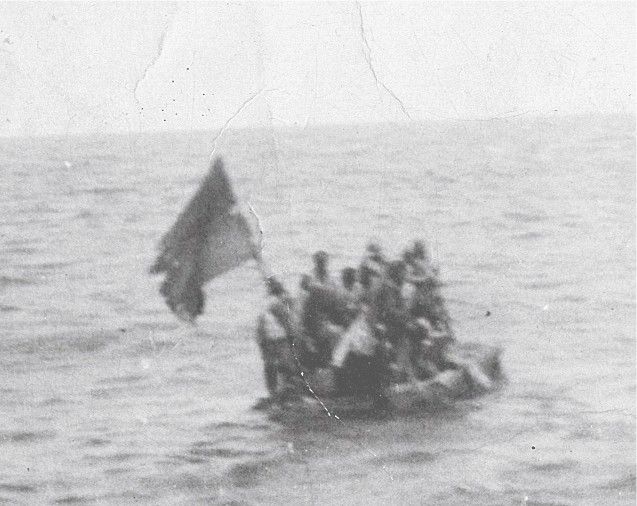 No you wont find gold in relation to the shipments or the cargo, it is the record of the gold for each ship and each mine it came from is were you will find the amount and value, this had to be kept as the mines needed paid even if the ship sunk the record could be months behind, the record would have went to London. One ton per ship as below.

help finding the name of a shipwreck

Been along time for a gold one !!

Oldest and Best Preserved Shipwreck in Adriatic Discovered Near Ilovik