🔎 UNIDENTIFIED Not? A split bolt?

Going back through my catalogue of finds, I wanted to call this part of a split bolt but the bridge type piece is attached to the rest so I don’t see how it would be possible to tighten it into a split bolt. the whole thing would spin instead of moving up the slot… anybody know another name for this? Sorry I’ve just got the one picture the actual piece has been stored somewhere.

it's a wire lug 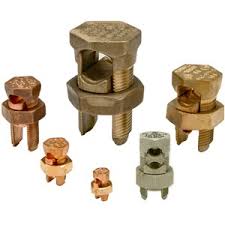 That’s what I meant by split bolt, but in order to turn the nut the bridge piece would spin too since it’s attached and I don’t see how that would work since it needs to move up the slot, the ones I use occasionally at work are three pieces so as the nut turns the other piece just slides up until it gets tight on the wire
Upvote 2

Older The Better said:
That’s what I meant by split bolt, but in order to turn the nut the bridge piece would spin too since it’s attached and I don’t see how that would work since it needs to move up the slot, the ones I use occasionally at work are three pieces so as the nut turns the other piece just slides up until it gets tight on the wire
Click to expand...

Did you clean it up better than the picture ? It sure looks like part of a “bug”
Upvote 2

Agree with ticndig.Looks like a split bolt to me....I have installed many in my life. Clean out the voids and there will be threads.
Upvote 3
OP

I don’t disagree, I’d clean it up if I knew where it was but that doesn’t change the fact I’m fairly confident it’s a single piece where it should be two.

The “bridge” piece should be sitting inside of the nut, that way as the nut turns it moves the “bridge piece” straight up until it was tight to the bolt… since it appears attached to the nut that would mean that “bridge” piece would turn with the nut, that would make it impossible for it to slide up the slot in the bolt since you would be trying to turn the “bridge piece” through the bolt.
I’ve been trying to think of how the pieces would end up fused… some kind of short?, maybe got tightened with some over powered tool and smashed it all until it was locked up, maybe someone playing with a welder? Or I was looking at those two piece split bolts maybe this one doesn’t have threads and just slides and then another piece followed behind to lock it in?

I don’t throw anything away but I do kind of sort by importance being a nut it’s probably in a bucket of other scrap metal In a barn or under a cabinet or in the basement…. Might just have to call it a nut for now and move on
Upvote 0
OP

Well checked one place and found a bunch of the stuff I just cataloged but not that split bolt looking deal, I did find the another ramrod holder though… wish I knew what they were when I found them, somewhere out there is a gun probably a northwest trade gun but I have no idea where. 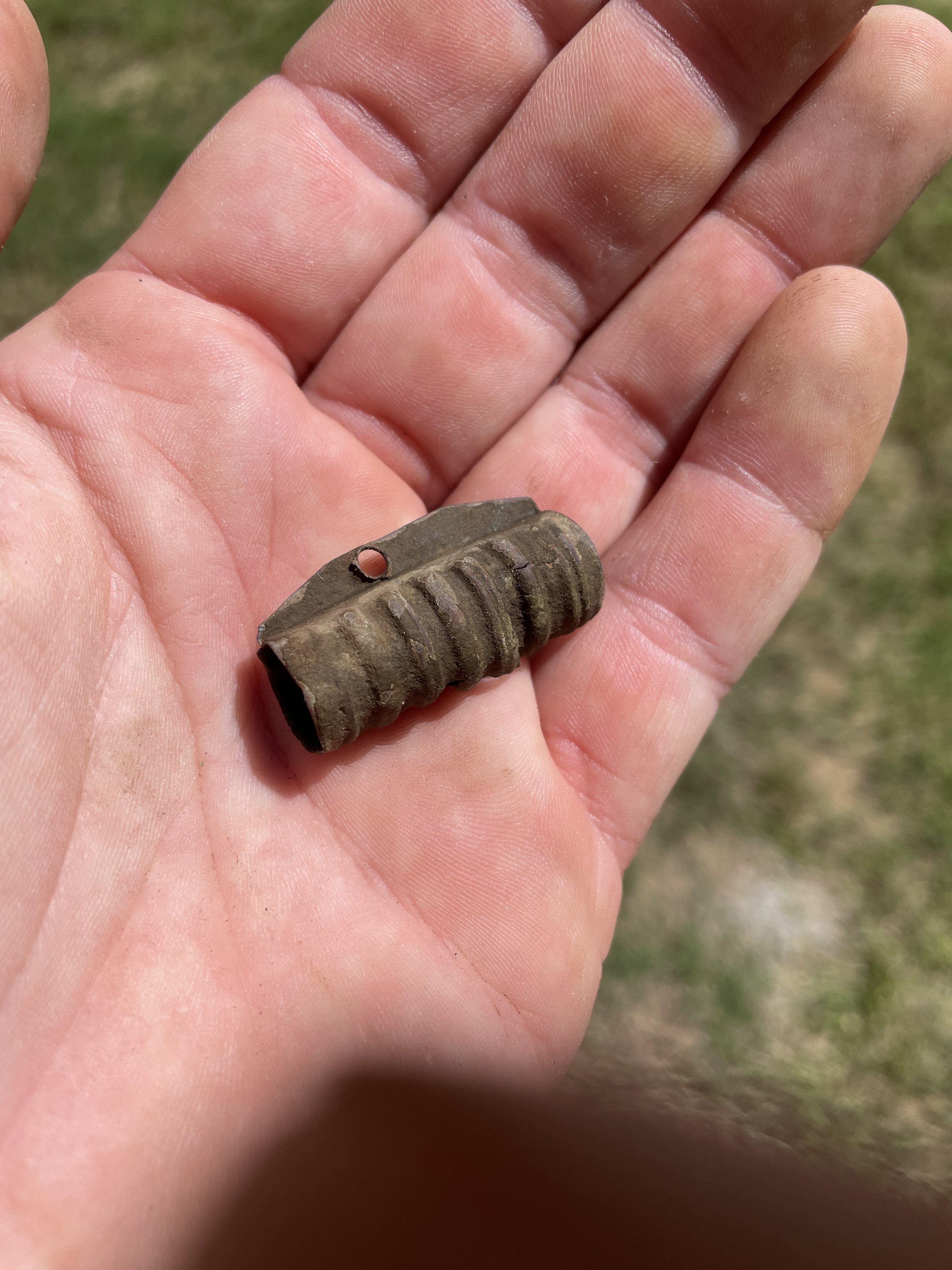 If those internal female threads are bound up with a few years of crud, then it certainly won't turn loose from the bridge piece, heck I have had brand new ones that are hard to open up at first. I will get one off my truck and take a pic of the two pieces.....
Upvote 1

If you turn the nut upside down tbere should be a few retainers that hold the independant bridge piece from falling out yet loose enough to spin free. See if it has those......this one taken apart to show it. 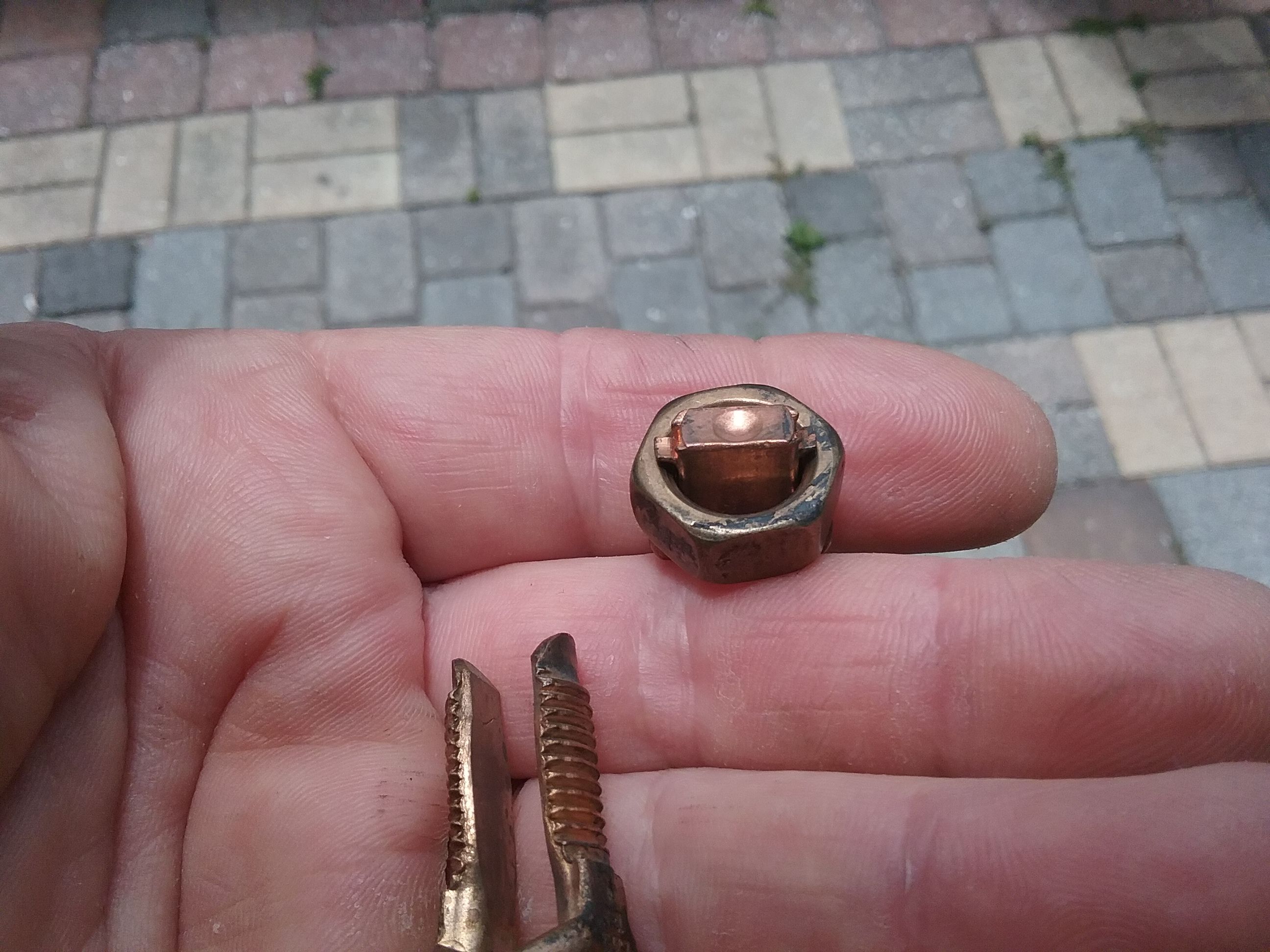 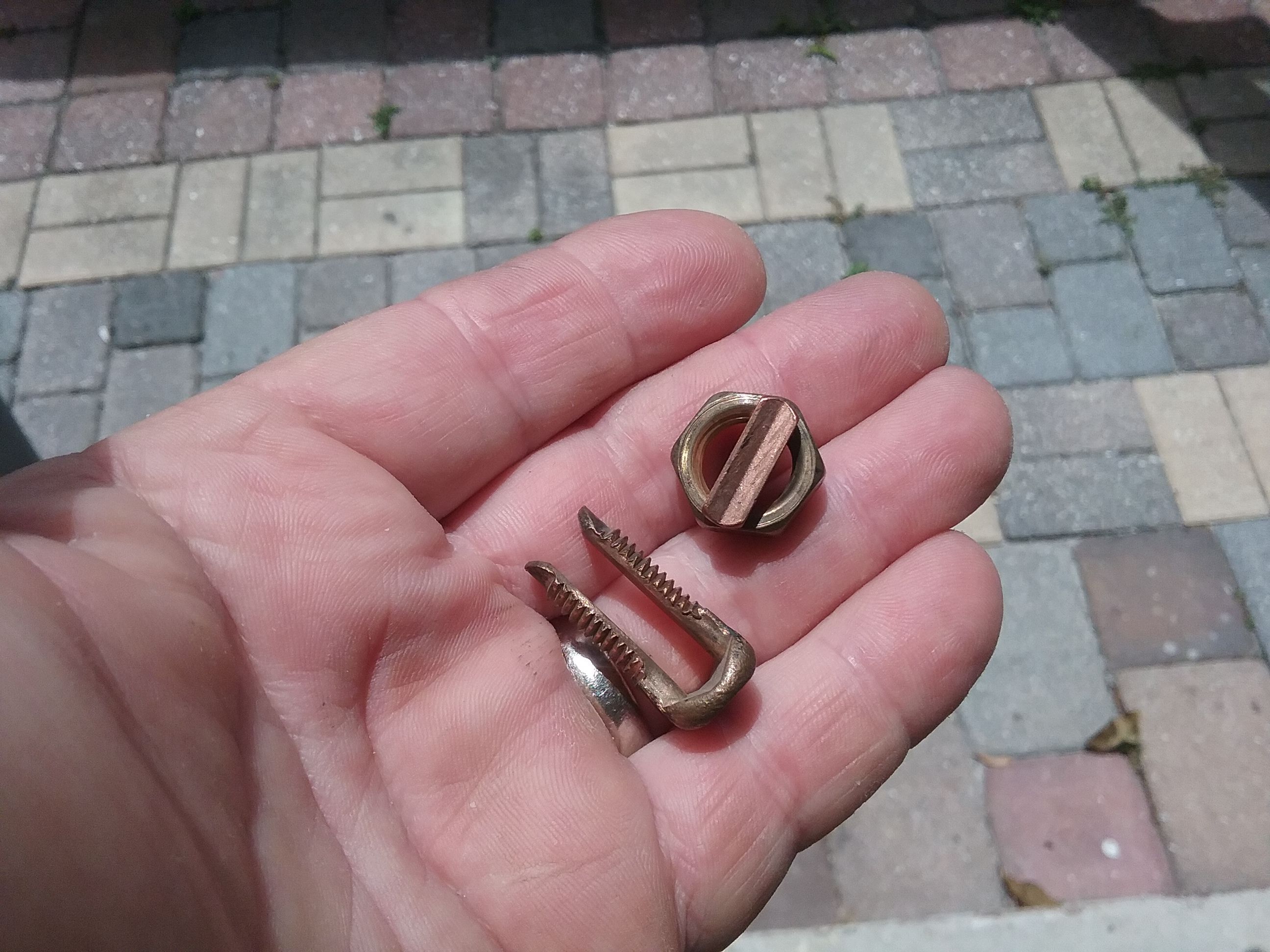 I’m going by a picture and the thought that I usually clean my finds at some point, to assume it’s fixed. otherwise I would have thought I’d recognize it since I use split bolts in my job somewhat often. Without knowing where it is I can’t confirm or deny anything.

the heart of my question was if it was fixed there was no way it could operate as a split bolt so I thought maybe it was another type of nut. Judging by the responses I’d have to assume there is not, which makes me doubt my assumption it’s a solid piece… someday if I come across it digging through the barn maybe I’ll know more.

But I do appreciate the interest in what In the end is a pretty uninteresting item, I just try to be as accurate as possible with my descriptions
Upvote 2

ticndig said:
it's a wire lug

This could still be a Wire clamp or clip. They also could slide a piece of flat stock in the top slot then put a bolt in it and tighten it to hold it in place
Upvote 1

It looks like the welded on nut that is typically welded to the top of a well water pressure tank.
Upvote 0
You must log in or register to reply here.