Oak Island the Strange, the Bizarre, and Maybe the "Truth!

Yes and aluminum did not go into use until the 19th Century. Plus that garnet is outlined with cast aluminum. No way would cheap crap like that have anything to do with the Ark of the Covenant of God. Day Dreamers keep on dreaming and watch all the mud, rock and WOOD.
S

franklin said:
Yes and aluminum did not go into use until the 19th Century. Plus that garnet is outlined with cast aluminum. No way would cheap crap like that have anything to do with the Ark of the Covenant of God. Day Dreamers keep on dreaming and watch all the mud, rock and WOOD.
Click to expand...

As the Ark of the Covenant was never on hoax island most here already are aware of that.

While the bobble from a kids holster may make the laginas and their partners stare at each other with wild eyes, it never did anything for anyone else.
M

Singlestack Wonder said:
While the bobble from a kids holster may make the laginas and their partners stare at each other with wild eyes, it never did anything for anyone else.
Click to expand...

That was some kid's holster: they added some silver to go with the copper just because they could, as well as using a Rhodolite garnet (historically worn by the pharaohs) in place of the usual red plastic blob.
S

LOL…the folks here that actually believe the show is factual and the laginas are not paid actors is hilarious.
OP


Robot Question?...Steve...Have you had time to study Fred Nolan's Surveys...Do you have any opinion on his accuracy?

Robot Question?...Steve...Any opinion that the numerous Drilled Survey Stones may be transit location from Constellations?

Robot Question?...Dr. Spooner...Has Hydrogen Sulfide… that was stated to have killed the Restalls....been found in the water anywhere else?

Millions of questions have been asked and answered.

Oak island is and always has been a hoax.
OP

What is causing the strange electronic malfunctions at Skinwalker Ranch and maybe at Oak Island also?

Thinking on these strange occurrences of electronic components mysteriously malfunctioning, I have come up with my own hypothesis.

The proof needed may be with the finding of a Dump Truck Load of the metal (Gallium) at nearby Blind Frog Ranch and now recent findings at Skinwalker Ranch with what may be the same quantity of the rare metal (Europium), both of these metals are superconductors and are proven to be a vital component for the building of today’s Super Batteries.

Gallium has already been patented as an element for replacing Ni-Cad (Nickel–Cadmium) batteries, as it has proven to be thousands of times stronger than Ni-Cad, along with having a greater charge capacity over Lithium-ion and today’s Cobalt batteries.

I believe what may be located on both these ranches is a super large underground battery.

A Super Battery of this dimension would need to contain the 3 essential elements.

“Three main components of a battery: two terminals made of different chemicals (typically metals), (Europium and Zinc) the anode and the cathode; and the electrolyte, (H2S (Hydrogen Sulfide) combined with water to form Sulfuric Acid (H2SO4), which separates these terminals. The electrolyte is a chemical medium that allows the flow of the electrical charge between the cathode and anode.”

Why would a Super Battery be located beneath Skinwalker Ranch?

Remember in Season 2 where the team experimented with placing unconnected light bulbs in the soil and showed that these light bulbs would light up without wires?

Before his death, Nicola Tesla was in the process of inventing Wireless Electricity Transmissions. 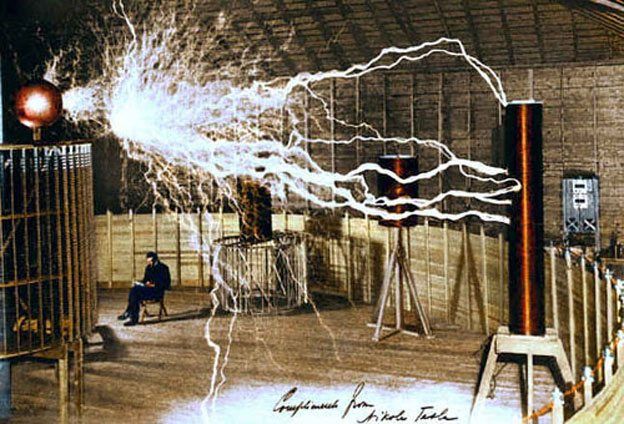 My hypothesis is there is a Super Battery underground Skinwalker Ranch and it is acting as a Charging Pad for the numerous UAP’s seen there, much like today’s newest invention for charging Cellphones, by placing them unplugged on a wireless Charging Pad.

This would further lead to my explanation as to why all the electronic battery failures!

The technology used by whoever built this marvel is based on “Reverse Polarity”.

I learned from my mistake, that if you try to charge a 12 volt battery by mistakenly placing the Battery Charger Cable Connectors on the battery in reverse (Positive Cable on the Negative Post), you will drain the battery and in effect reverse its polarity from a Positive Polarity to a Negative Polarity.

Our Electronics are founded on a Positive Polarity System.

Alien Technology may be based on a superior Negative Polarity System.

Any vehicles or electronic components coming into contact with their Charging Pad would quickly find its power being depleted.

Light bulbs would not be affected as they can use either polarity to function.

I am of the opinion that earlier civilizations (Egyptian, Israelis, Aztecs, and Rosicrucian Alchemists) discovered this technology, using it for what is referred to as “Eternal Lighting”.

I believe that with further investigations we may once again rediscover this future technology for our own use.

The Templar, you can not join under multiple names, you are already registered under IExplorer.
You must log in or register to reply here.

Oak Island - the real mystery is if there even is a mystery?