Well half a Tootsie Toy panel truck anyway. I have been to this spot before. Mostly clad with a little jewelry sometimes. A small school building still used by the school board, but no kiddies playing on the field to leave behind goodies so most of the stuff has been there a while. But the school is not real old so the best finds are from the houses that were there before the school.

I did a short 4 hour hunt with the CZ21 and managed 55 coins with a face value of $3.02, 2 old copper roofing fasteners, a Kawasaki key from an ATV, a shotgun slug, half a toy truck, can slaw and aluminum bottle caps. 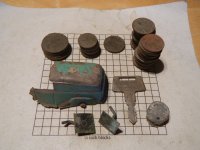 ​
The truck is a Tootsie Toy 1950 Chevrolet panel truck produced from 1950-59. My father actually had that exact truck (his was red) that he used for work. I remember riding with him when I went to help on jobs. This thing brought back some memories when it came out of the ground. Too bad it?s not all there. 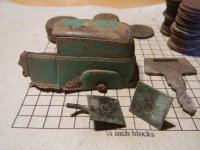 ​
No great finds, but a good day out in the fresh air cleaning up the ground and bringing home a little gas money (this spot is close to home so $3 should cover it LOL).

I went to the house with the dirt cellar floor and returned the lost wedding band (see ?Wedding band finds its way back to the owner, return #36?). When he showed me the cellar we found that a decent portion of the floor was concrete and most of the rest was large stones probably put down when the house and stone foundation were put in at the time the house was built. There was almost no dirt floor (maybe 6 square feet) and it had a low ceiling. It was more of an access to the furnace and plumbing not really a cellar. He apologized and said he rarely goes down there and thought more of the floor was dirt. So that was a bust so without any plan I just went to a sport complex about 10 miles east and got the CZ21 working.

I spent 4.5 hours swingin around the basketball and tennis courts. I found a bunch of aluminum cans and a pile of tennis ball can lids. Altogether 77 coins with a face value of $5.65, a very crusty wheatie, 3 copper clad bullets, a silver ring, a gas valve and a few tabs. 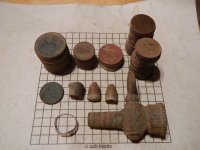 ​
The ring was a nice surprise. I got a faint high tone and dug my plug. It was still in the hole so I scooped out a handful of dirt and see a thin silver edge in the bottom of the hole that I thought was a coin. I stuck my trowel in and pried up more dirt with the silver in it and saw not the coin I thought it was, but a little silver initial ring. It is an Uncas Manufacturing Co. ring made some time after the mid 1920?s. 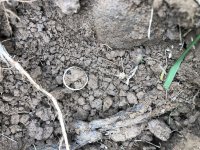 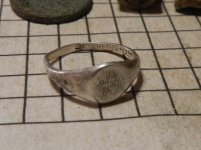 ​
The gas valve is beautiful. They really put a lot of effort in making everyday items look nice in the old days. It is probably from the old houses that were here before the field and was down about 14 inches. It looks like it might clean up nicely. 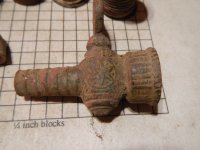 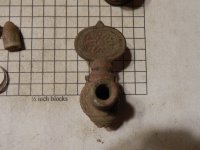 ​
The old man is still swingin and diggin up the trash and the treasure. One more silver for the pile and the gas is getting paid for as I get my exercise in the fresh air. Thanks for looking, stay safe, good luck and may your coil lead you to good things.
Upvote 9

That valve is quite pretty! I like that panel truck, too! Nice array of goodies!
L

Looks like it was a fun hunt with a nice hodge podge of finds. Take care.
X

Great post! Thanks for sharing and grats on the keepers.
You must log in or register to reply here.