Since the lake water levels are way down right now we went for a drive to a lake beach that I found plenty of good old finds before. Some as far back as colonial. I hit the beach area hard before many times and maybe went out about ankle deep max in the wiser. This time I tried around 2-3 feet. We didn’t have long before dark but I did find a mix of random stuff but the best was a spill of buttons and a nice old sterling silver ring. I hope to go back very soon to see if maybe some old gold could be around. There has to be more some more stuff around there yet by the large amount found there in the past. Thanks for looking! 😁👍 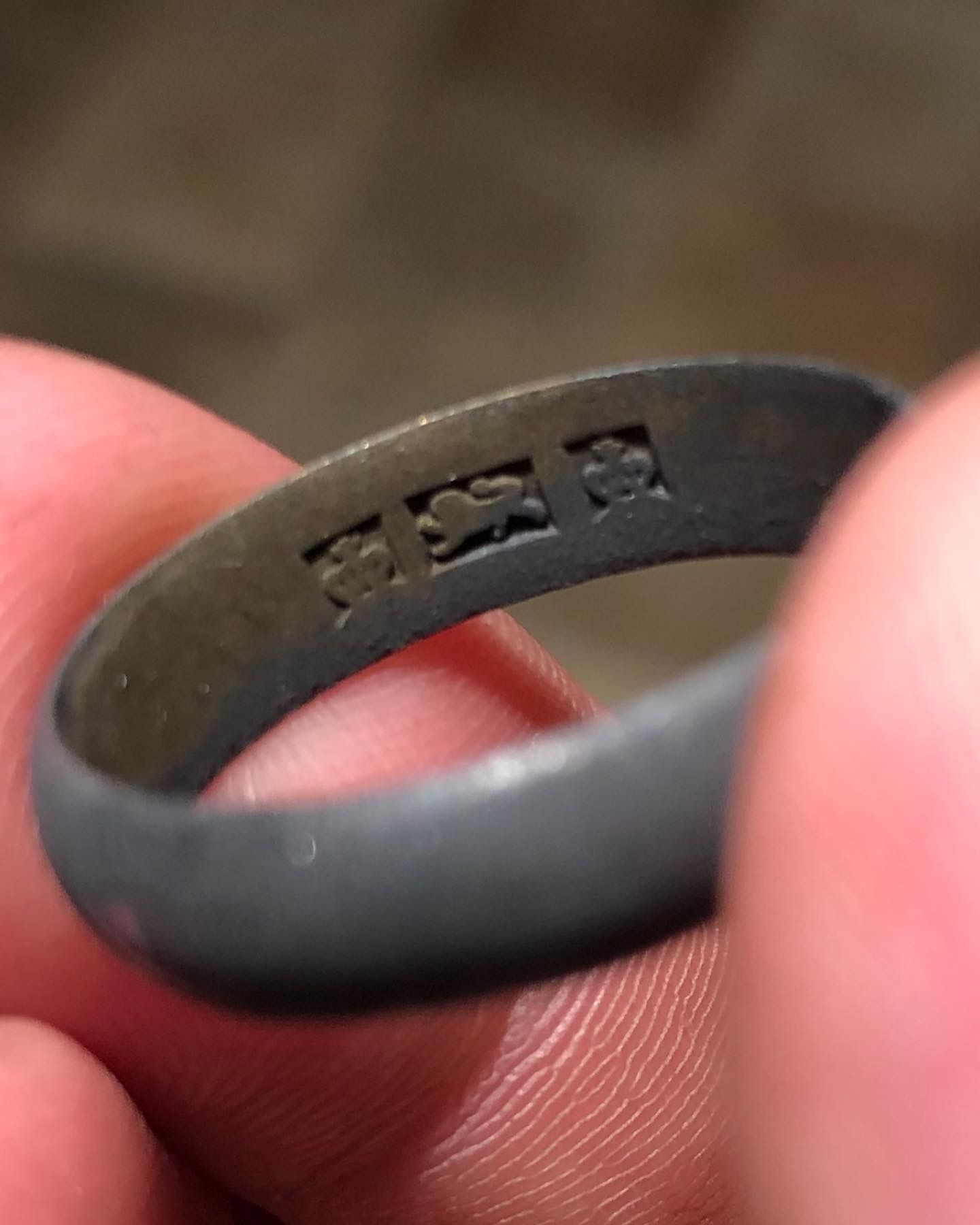 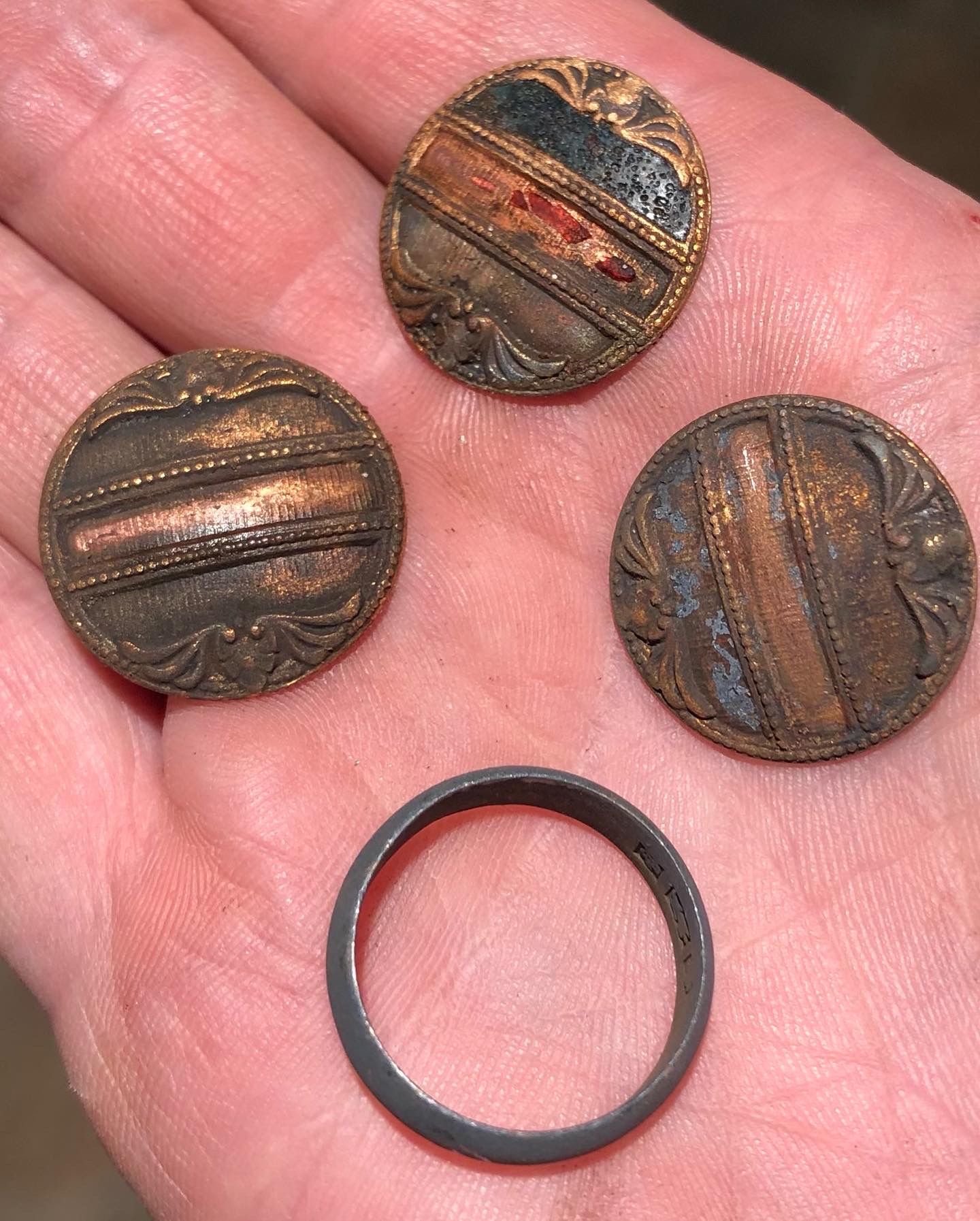 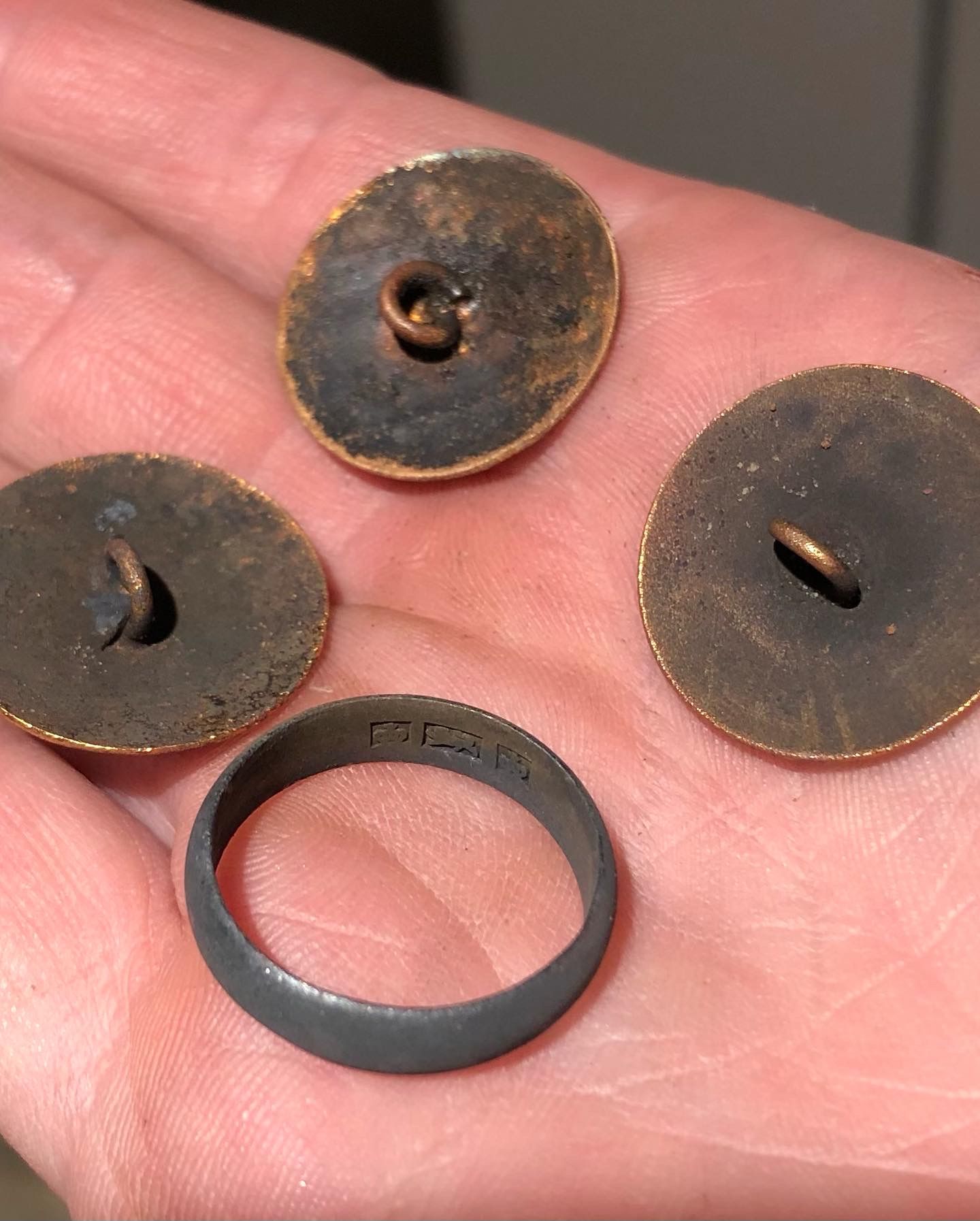 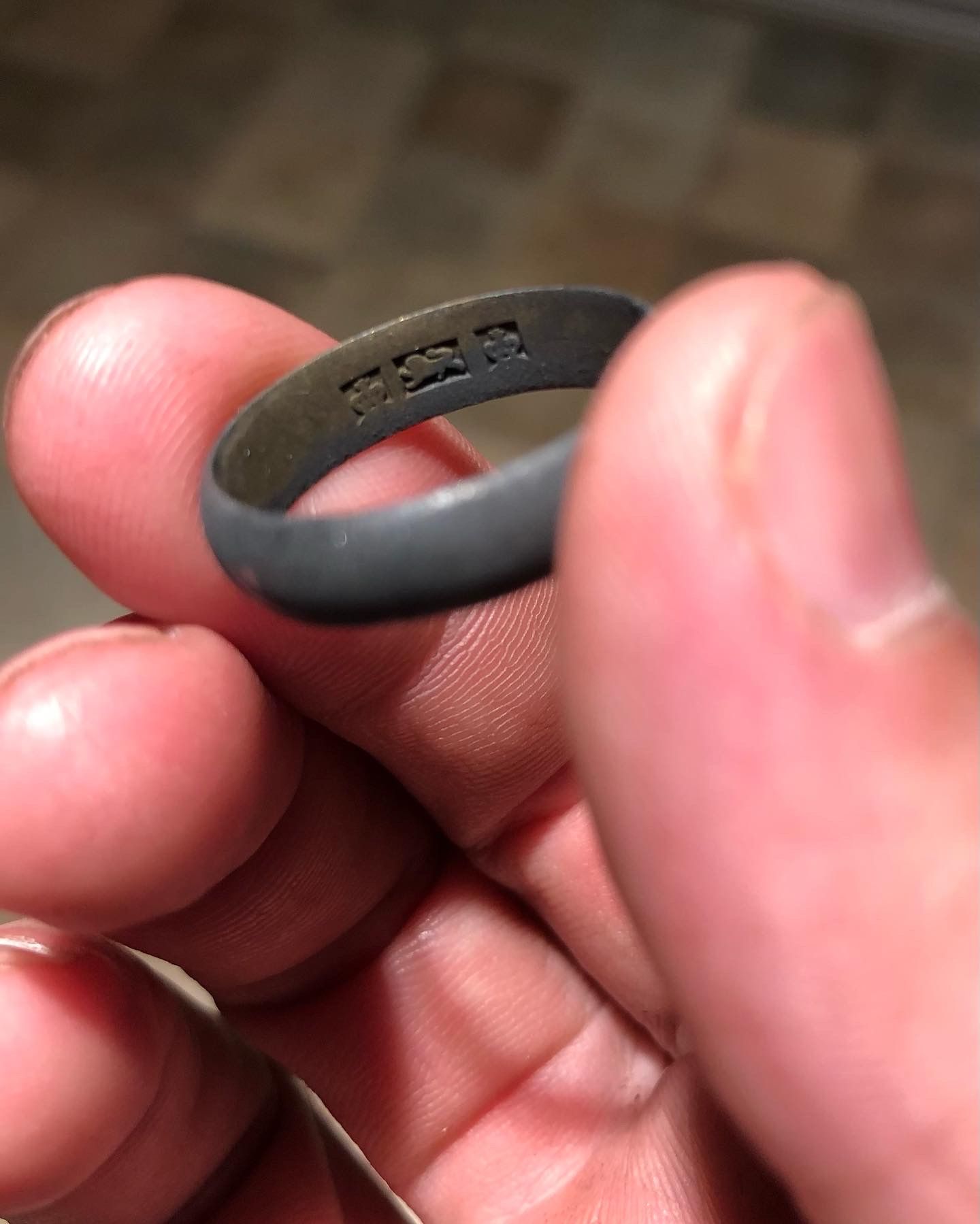 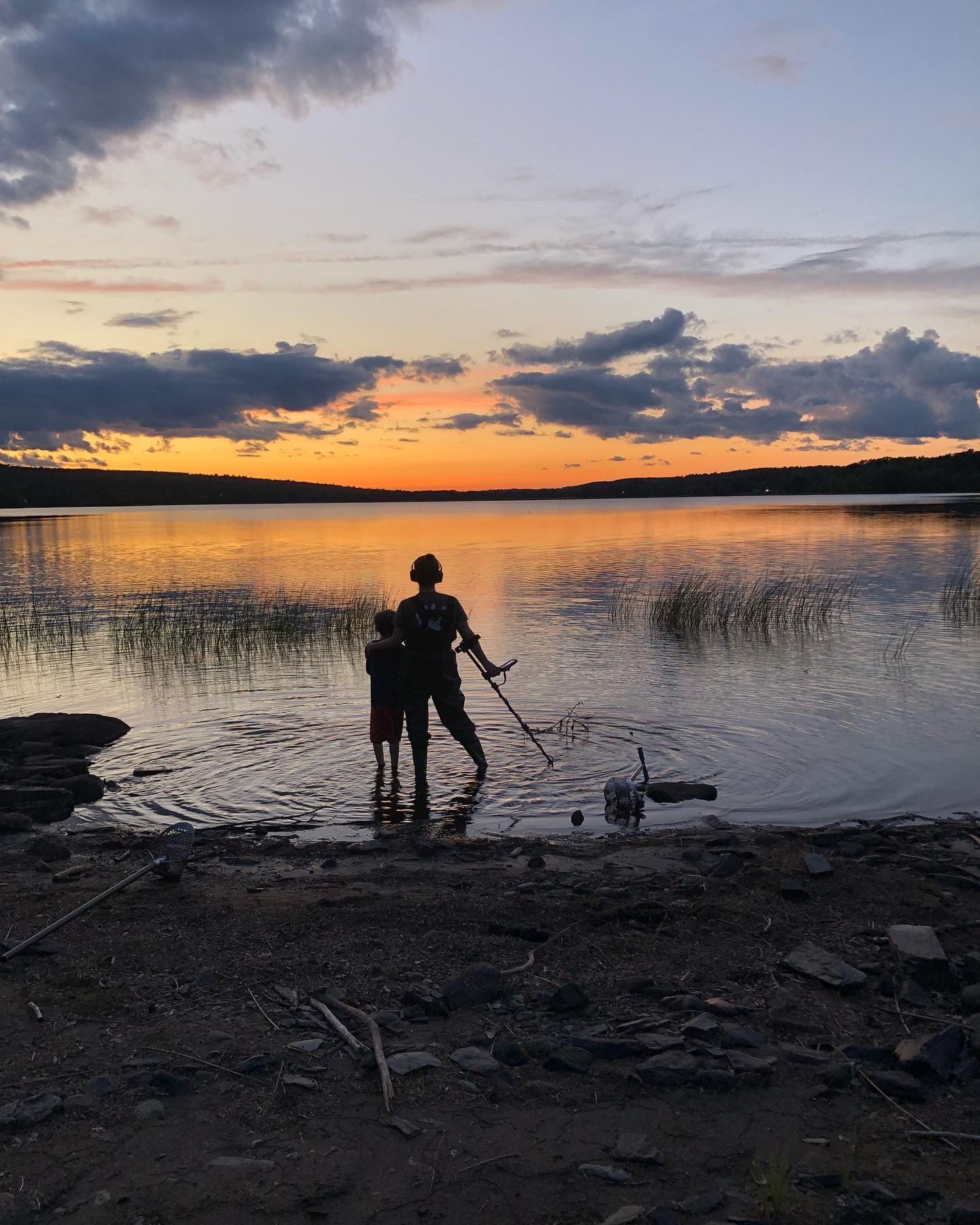 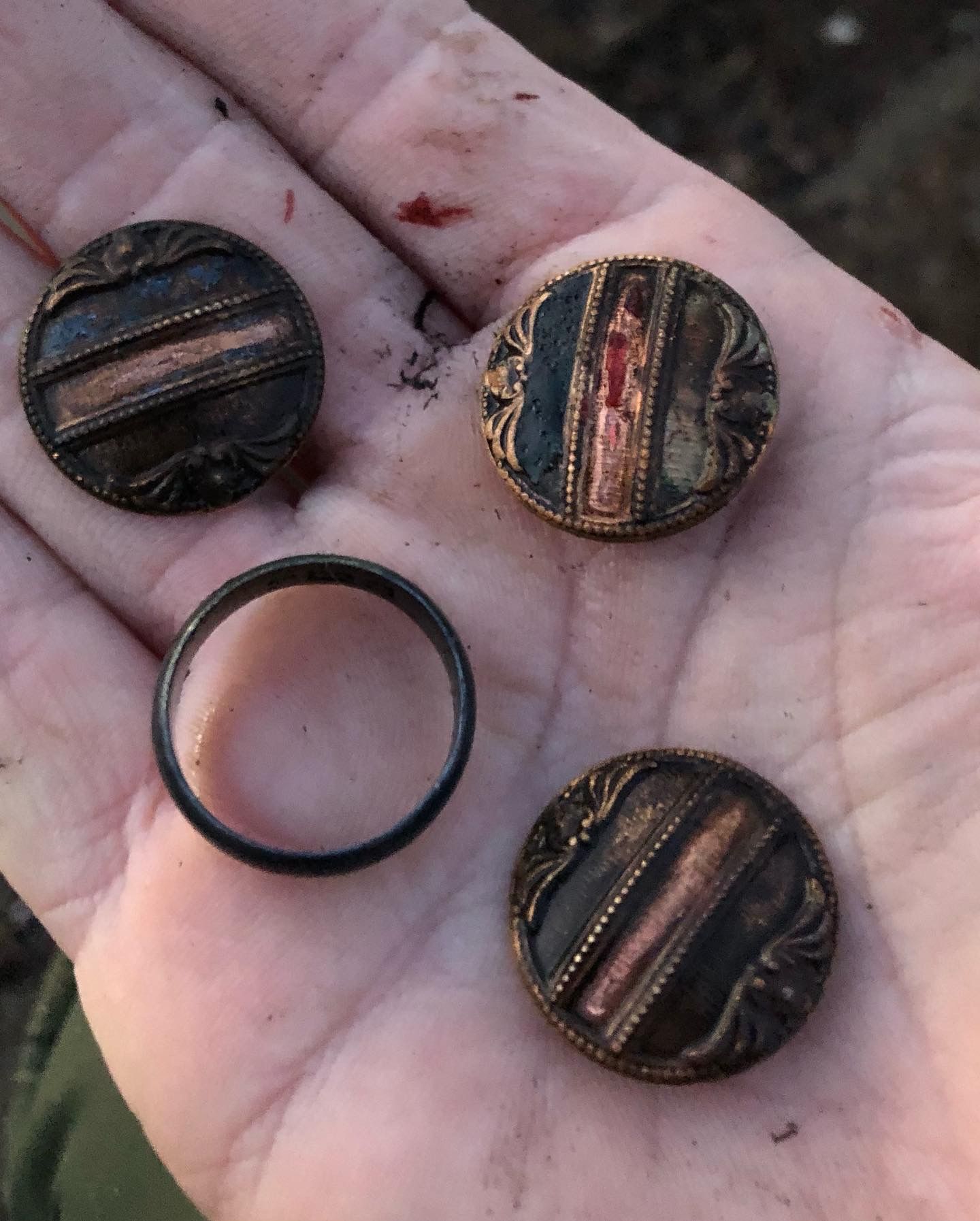 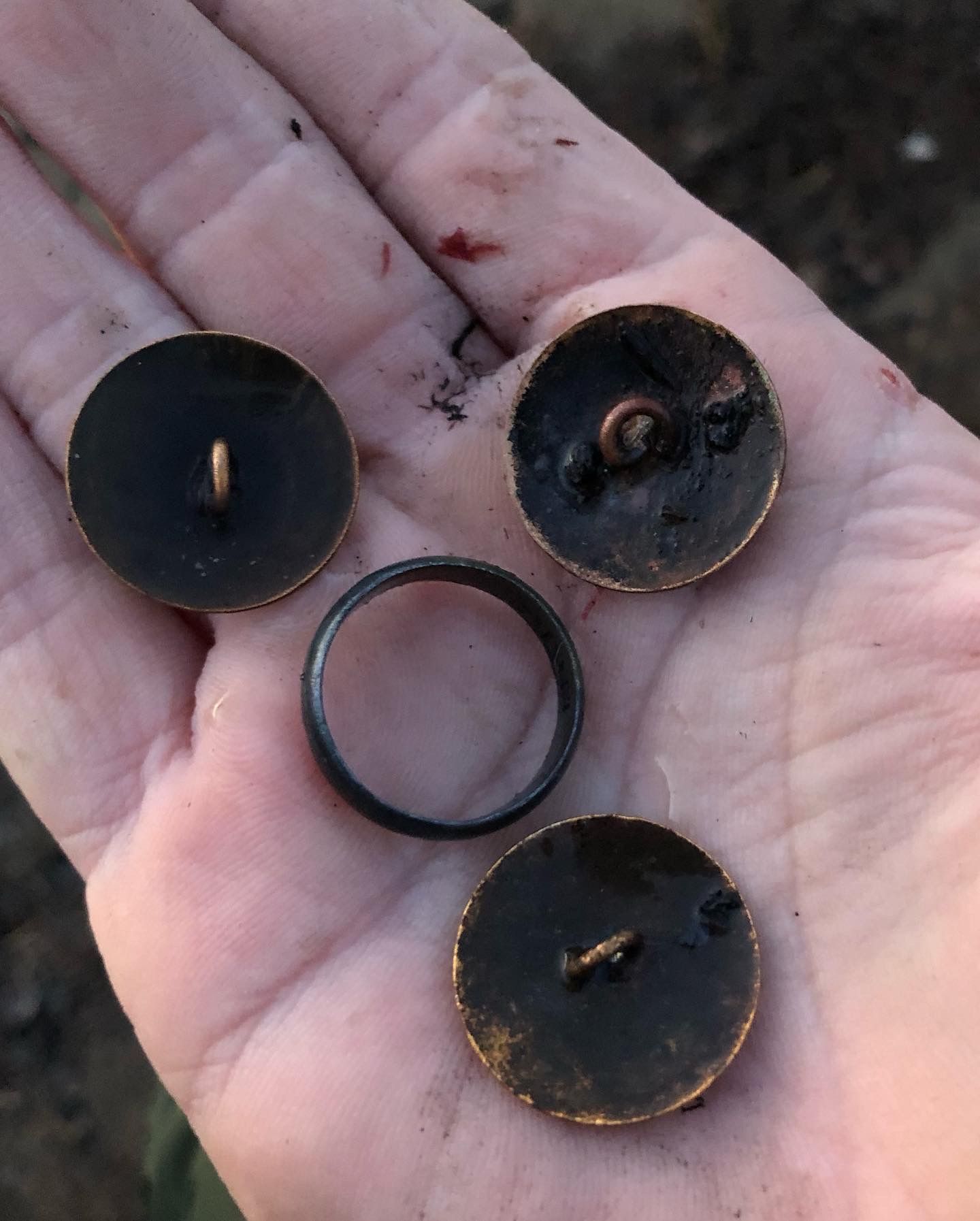 Congratulations on your nice recoveries

That's a nice old silver ring, the buttons are cool too. Nice hunt!

Great finds. Looks like you had a good assistant.

Well done on the silver ring.
Those 3 buttons are top shelf recoveries. 👌

great saves and great post, gonna be more there I'd bet. love the pic of you guys in the water, thanks
OP

Hunk-a-lead said:
great saves and great post, gonna be more there I'd bet. love the pic of you guys in the water, thanks
Click to expand...

I took the picture. It’s my boy and wife but hard to tell just from a silhouette. I’m lucky she loves to detect also! 😁
D

K1DDO1979 said:
I took the picture. It’s my boy and wife but hard to tell just from a silhouette. I’m lucky she loves to detect also! 😁
Click to expand...

That's a nice day at the lake.
OP

It is. I should retire the old nickname of mine but it’s been going for 25 years. I’m told I still look young enough sometimes that it’ll fit! 😂

That hallmark is an odd one, I assume it was done to fool people.
The Lion is not in the correct cartouche to be British & it seems to have 2 Sheffield looking Crowns either side. You would never have 2 & the Crown like marks are incorrect. Look below to spot the differences;

The pic of you and your son: Priceless.
Don....
OP

CRUSADER said:
That hallmark is an odd one, I assume it was done to fool people.
The Lion is not in the correct cartouche to be British & it seems to have 2 Sheffield looking Crowns either side. You would never have 2 & the Crown like marks are incorrect. Look below to spot the differences;

Yes from the start my guess was Sheffield because of the crown and British silver because of the lion but I never seen examples of Sheffield using two crowns which I found very odd. A few years ago I found a very similar silver ring there at the same lake that also had strange hallmarks. I’ll post a picture for you. It’s a old picture so don’t mind the quality. It has the word “sterling” and also the British lion rampant stamp! 🤔🤷‍♂️

Mackaydon said:
The pic of you and your son: Priceless.
Don....
Click to expand...

I took the picture. It was my wife and son standing there but no way of knowing that by the silhouette. It did turn out great! 😁👍

I’ve tried a number of times to squash some of the myths about silver marks in general and British hallmarks in particular… such as: “it has a lion passant so it must be sterling”; "it has a crown so it was made in Sheffield"; "the anchor means it was made in Birmingham" etc. but here goes again with a potted version:

Unlike America (and Canada until the early 20th Century) where manufacturers effectively “marked their own homework”, British hallmarks were applied by an official Assay Office in one of a number of designated cities where the sponsor had registered his mark.

As such, the hallmark set comprises what are known as compulsory or “statutory marks” governed by law and a piece could not legally be sold or marked as “silver” without these marks. The penalties were high. The compulsory marks would be: standard mark; city mark; date letter; duty mark (between 1784-1890 only); and sponsor’s mark (which may or may not be the actual maker)… but not necessarily in that order. The design of things like crowns, lions, leopards etc was also tightly regulated.

Each Assay Office also specified its own font styles for date letter sequences and used specific cartouche (shield) shapes for the marks such that there could no confusion over what year a particular date letter represents. Words such as “sterling” were not used as part of these compulsory marks and, although a maker could add such words (hardly ever the case in Britain), it would be illegal unless the piece was also officially marked with the compulsory set, including its standard (usually the lion passant for Sterling).

You will often see these pseudo hallmarks on British silver plate (but not with the word “sterling”), although British manufacturers tended not to sail too close to the wind in their imitations of official marks. The use of the "crown" on silver plate (not just by Sheffield makers), although technically prohibited by codes of practice, was tolerated until around 1895 after its prohibition was reaffirmed by legislation. Makers outside Britain, and especially in America, were outside the reaches of British justice and used imitation marks with a greater degree of audacity on both silver and silver plate (as well as on base metal silver imitations such as "German silver").

Neither of the rings you're showing have British hallmarks. They’re “pseudo hallmarks” applied unofficially, and most probably American. When the word “sterling” appears on American pieces there’s a very high likelihood that the piece is actually silver, but a much lesser chance otherwise.
Last edited: Aug 19, 2022
You must log in or register to reply here.